Great Horror Performances: Simon Pegg in SHAUN OF THE DEAD 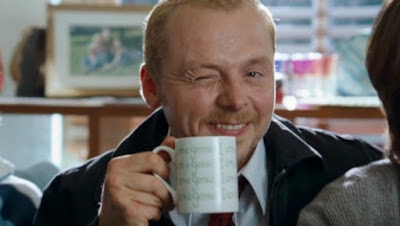 Anyone who has known me for more than 10 minutes knows that Edgar Wright’s Shaun of the Dead is one of my favorite movies. No matter how many times I watch it, and I watch it a lot, I discover new things to love about it. My wife and I caught it on cable a few weeks ago, so naturally we left it on. It was on this viewing that Simon Pegg’s performance stuck out to me in ways it never has before and it left me wondering why.

It’s not like I didn’t respond to him before; quite the opposite actually. It’s the performance that put him on the map for me (I hadn’t seen Spaced yet) and I loved him immediately. He’s at the heart of some of my favorite scenes in the movie, from the always hilarious slip-on-the-blood moment in the convenience store, to his delivery of “Thanks, babe.” Also, whenever my wife and I hear the name Pete, we instinctively turn to each other and cautiously say in our best Pegg voices, “Pete… Pete…”

My point is I’ve always loved him as the titular Shaun, but this last time around his performance became something else to me.

Allow me to get serious for just a minute. I’m very, very lucky that my parents, both in their 80s, are still with us. I know many people are not as fortunate as I am to have both parents still around at our ages, so for that I’m truly grateful. They’ve always seemed invincible to me, and in a lot of ways they still are. The fact of the matter is though, they’re slowing down. Without getting into great detail, while they remain relatively healthy, they are finally starting to show their age a bit, and for the first time in my six siblings and I’s lives, we’ve had to step up a bit and start taking care of my parents more than ever before. We can’t all live forever, and that includes my mom and dad, a fact that seemed impossible to me only a few years ago, but now is ever present in my mind. Now that I’ve brought the room down, let me get to my point.

I’ve always given Shaun of the Dead -- and specifically Edgar Wright -- credit for brilliantly balancing the funny with the horror, tonal shifts that are seamless. Obviously more credit needs to go around, like to Pegg as co-writer with Wright on the script, and the cast as a whole deserves a lot of love as well. For the purposes of the piece, however, I’ll single out Pegg, along with Bill Nighy and Penelope Wilton, as being responsible for the two big emotional, gut-punch moments in the film when Shaun is forced to confront his mother and step-father’s deaths. 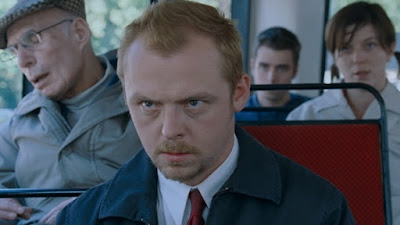 The first scene comes about midway through the movie, when Shaun’s stepdad, Philip, played by the great Bill Nighy, succumbs to a zombie bite he received earlier in the movie. Shaun has a strained relationship with Philip, but in a car loaded with his panicked friends as they speed and weave towards safety, Shaun and Philip share a moment in the backseat that manages to cut through the noise and chaos of the scene around them. Nighy does a lot of the heavy lifting in this scene, but it’s Pegg’s reactions to hearing the man whom he earlier refused to call “dad” tell Shaun that he has always loved him and that he’s “a good boy” that kill me every time. Pegg does more with just his face in this scene than some do with a page of dialogue. It’s really terrific stuff.

The real gut-punch moment comes later when Shaun discovers his mother, Barbara, has been bitten. As she lay dying in Shaun’s arms, he pleads with her not to go. And while the emotional scene with Nighy relied on Pegg’s facial expressions to react to his stepfather’s last moments, in this scene Pegg is allowed to really break down and lay everything out. The next few minutes are a wild ride that end with a heartbreaking, “I’m sorry, mum.” I could spell out beat-for-beat what happens in this scene and why it works, but as hard as I try I can’t find the words to do it justice. I’ll advise you to just throw Shaun of the Dead on and let the performances speak for themselves.

This brings me back to the last time I watched Shaun. Like I said, Simon Pegg’s performance really struck a nerve with me and I know now that I was bringing my own concerns into that viewing. Shaun had to say goodbye to his mom and dad, and while the world was falling down around him and it seemed like death was inevitable, he still wasn’t ready to let go. I’m not sure I am either, but for whatever reason – I would need a doctor to explain it to me – this great performance, while bringing to the surface my own fears, also managed to make me feel better. For that reason alone, I raise a nice cold pint to you, Mr. Pegg.