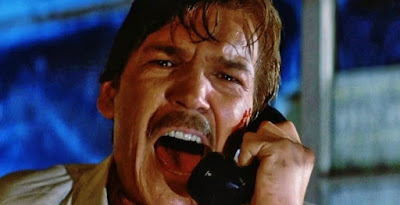 Who needs Michael Myers when you have Dr. Dan Challis?

It’s all too rare in horror when you see a movie character in a state of being. The plot requires the protagonist to prioritize the film’s conflict over their own personal desires. It’s for this reason I love Tom Atkins performance as Dr. Daniel Challis in Halloween III: Season of the Witch. He doesn’t do that. Surely Challis cares about the nefarious plot of the film, but it’s not going to come before his boondoggle. When you take a step back and think about this character, it’s kind of amazing our hero is more concerned about a beer & sex walkabout than remaining at work or spending time with his children. He’s a flawed guy, brought to vivid life by Tom Atkins.

Halloween III: Season of the Witch is a beyond-goofy movie elevated by a character and performance that effortlessly blends a man and the man playing him into one. The best part is that it doesn’t feel like a playboy/party time artifice made up by filmmakers. Atkins as Challis is simply “What if the guy who shuts down the dive bar at 4am on a Tuesday happens to be in a Halloween mystery this week?” This character is malleable; you could take him out of this franchise and genre and put him in anything because he’s the manifestation of primal desire. He’s one of horror’s most human characters because he needs a drink before he can think. 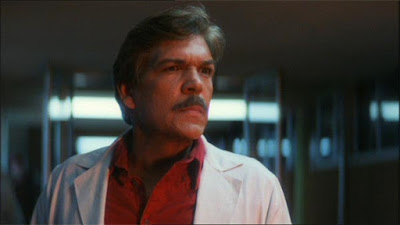 Another magical aspect of this character and performance is that Challis seems to want to be a good guy but is so bad at it. At the beginning of the film, he brings his two children Halloween masks as gifts but they’re cheap and shitty, like he barely tried. But he tried. He had to go into a store, look around for five seconds, and buy them. He didn’t have to do that, but he barely does and that’s all he can give. Later in the movie, after sleeping with Ellie Grimbridge (Stacey Nelkin), he asks how old she is. He’s moral enough to ask; he just gets the order wrong. Thankfully, Nelkin reassures all of us she’s an adult and absolves Challis’ guilty conscience. And when he’s on the phone with his ex-wife (Nancy Loomis), putting off plans with his kids for the umpteenth time, he doesn’t want to let them down. He feels genuine guilt and remorse, but like Woody in Toy Story 4, he’s given them all he has, and he needs to run off with his six-pack and go on a Scooby-Doo adventure with a woman he’s into. Do you see the pep in his step when he gets off the pay phone with Loomis? He’s living his best life. Regardless of the outcome at Silver Shamrock, he’s going to remember this trip forever. You think by next Halloween he won’t be recounting the tale of the time he slept with a “ro-buht?” Of course, he will. It’s the scripture of Dan Challis’ journey. 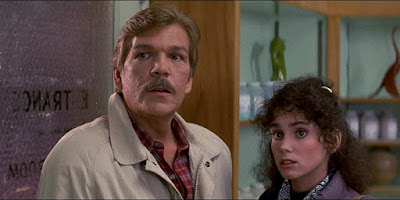 I mentioned before that I see Challis as a blend of character and actor. Here’s why. Tom Atkins wife at the time (actress Garn Stephens) is in Halloween III: Season of the Witch. Stephens plays Marge Guttman, the woman in the motel room next to Atkins and Nelkin who eventually gets her face lasered by a Silver Shamrock mask. Can you imagine how weird it would be to say to your wife, “I’m so glad we’re in this movie together. So…listen, I’m going to have movie sex with this other actress and you’re gonna be there too. Nothing kinky. Your character has her face blasted off in the next room. That’s the business, babe.” And what is it about Tom Atkins? Was he sexy and they put him as this stud in John Carpenter projects, or was he written as a hunk in Carpenter projects and got sexy because of it? He’s like Prince. On paper, Prince shouldn’t be that sexy but then when you see him in the wild, you get it. Same with Tom Atkins; this is his “Darling Nikki.” He’s so sexual it would make a copy of Auto Focus blush.

It’s our good luck as horror fans that this man is inexplicably the lead of Halloween III: Season of the Witch. It’s a supremely entertaining, idiosyncratic, and great performance that elevates the entire film.