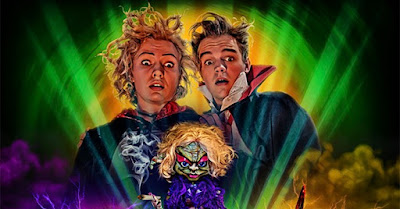 The first of Full Moon's Deadly Ten is here!

After much promotion and hoopla, Full Moon has debuted the first of their Deadly Ten -- a series of ten new films the company is producing and simultaneously live streaming the production of -- with the release of Weedjies! Halloweed Night. In some ways a remake of the company's own Ghoulies (back when they were Empire Pictures) but with the added bonus of the marijuana culture angle that made their Evil Bong movies such a successful and long-running franchise. It makes sense for them to lead off with this one, even if it doesn't totally promise anything different for the future of the Deadly Ten. It's more of a refinement of what has come before, and I mean that in the best way possible. It's the night before Halloween, and three friends -- Madison (Brett Hargrave), Dallas (Victoria Strange), and Frankie (Yo Ying) -- looking to raise money to pay for college tuition are hosting a massive party in a Las Vegas hotel. There's a huge turnout, including appearances from such celebrity guests as Full Moon regulars Mindy Robinson and David DeCouteau; comedian Ester Goldberg; Sal Governale, Richard Christy, and Medicated Pete from The Howard Stern Show; and D'Arcy the Mail Girl from Joe Bob Briggs' Shudder series The Last Drive-In. While the guests are off doing a scavenger hunt, the three girls are talked into messing around with a ouija board, unleashing the demonic Weedjies, pint-size monsters who wreak havoc on everything and everyone.

In a lot of ways, Weedjies is business as usual for Full Moon in recent years: it's a horror comedy with small, ready-to-market monsters and a healthy streak of stoner humor to help shore up at least one target audience. But it's also something not a lot of Full Moon movies have been over the last decade, and that's fun. Sure, all of them have aimed for the target, but few have managed to hit the bullseye. Weedjies does. It's a bigger, more ambitious undertaking for the company, with a large cast and decent production values, plus slick, colorful photography from returning DP Howard Wexler (who also shot the upcoming Deadly Ten features Blade: The Iron Cross and Femalian: Cosmic Crush). Shane Bitterling's script is lively and full of bits of business for the Weedjies, who, unfortunately, don't show up until halfway through the movie's 70-minute runtime. Once they do, though, it becomes Gremlins or Gremlins 2, with gag after gag involving the little monsters, brought to impressive life through practical puppetry -- or, in the case of the one called Weed Wolf, through the magic of an actor named only "The Don" in a werewolf costume . 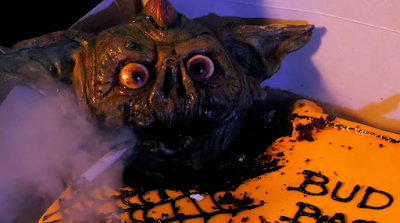 Pretty much everything about Weedjies is a leap forward in quality for Full Moon. It feels bigger, with a wider variety of sets and locations. The action even moves to outside the Vegas strip for one sequence to give the film greater production value. It's even shot in 2.35:1 widescreen, giving it a more expensive sheen than its otherwise low budget might suggest. The effects get the job done and never call attention to themselves as being cheap or shoddy. The cast is uniformly appealing, even if the party sequences feel like unnecessary padding and the celebrity guest stars an obvious attempt at giving the thing some marquee value, at least among cult audiences. The Halloween setting helps ensure repeat viewings, as Weedjies is exactly the kind of goofy fun that's perfect to throw on during a party every October. I could do without the drug stuff because I'm me, but unlike many of the Evil Bong films, one's enjoyment of the movie does not depend on one's relationship to weed culture. You could just as easily take the weed stuff out of the movie and it would be no worse off. All it would require is a title change. 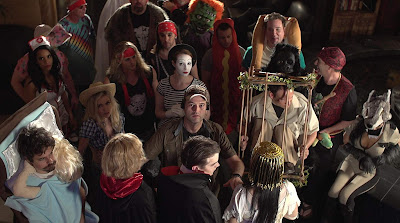 It's a smart choice for Full Moon to kick off their Deadly Ten experiment with Weedjies, as it delivers on what has become the brand over the last 10 years while also improving on quality over recent projects. It's their best offering since Trophy Heads, and gets the Deadly Ten off to a good start. It's a great big party of a movie, chock full of fun effects and goofy humor -- the Platonic ideal of what Full Moon has been working towards over the course of their last several comedies. It's streaming on the new Full Moon Features app and Full Moon's Amazon channel as of today, but I'm hoping there's a Blu-ray release planned for these Deadly Ten films in the near future. This is a title I'd be happy to add to my Full Moon library.

Got a title you'd like to see covered in a future installment of Full Moon Fever? Let us know in the comments below!
Posted by Patrick Bromley at 12:00 PM