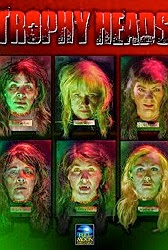 The first original series from Full Moon is also the best thing they've done in years.

Since launching in 2013, Full Moon Streaming has been growing at a pretty quick clip. In addition to the entire Full Moon catalogue -- which also includes some of the "Grindhouse" titles they own and the kid-friendly "Moonbeam" line -- the service has acquired a number of films from Bill Lustig's great Blue Underground line and, more recently, the Something Weird library. If you're a fan of exploitation and cult movies, there is an embarrassment of riches available on the site. It has become, in the words of Band's own marketing for the service, a kind of "Netflix for lunatics."

In following the Netflix model, Full Moon Streaming introduced its first original series last summer: Trophy Heads. More than anything else, this is the biggest leap forward for the service -- original programming available (at that time) exclusively on their platform. It's also the perfect choice to be the flagship production, as it's a series that takes place entirely within the Full Moon universe and offers all kinds of inside jokes and meta-commentary for the kinds of devoted fans who are subscribing to Full Moon Streaming in the first place. Originally released in five parts over the course of as many weeks, the series has now been cut together into a feature for release on DVD and Blu-ray.

Max (Adam Noble Roberts) is a depressed and obsessed horror movie fan living in the basement of his mother's house (she's played by Maria Olsen of Starry Eyes). Lamenting the end of the classic Empire and Full Moon movies of the '80s and '90s -- most of which he's still watching on VHS -- Max comes up with a way to immortalize the Scream Queens he loves forever: he's going to track them down and and murder them in reenactments from their classic films, mounting their heads on his wall to keep him company. So one by one, he "collects" his favorite stars: Brinke Stevens, who now runs a massage parlor; Linnea Quigley, now a born-again called Sister Linnea; Michelle Bauer, who operates her own juice stand, and Denice Duff and Jacqueline Lovell, both still actresses pounding the pavement for parts. Can they put aside their differences to escape Max's prison? Or will they wind up as two more Trophy Heads added to his collection?

In many ways, Trophy Heads is the ideal project to be chosen as Full Moon's first original series, as there are strengths to it being told in this kind of serialized TV format. Its structure lends itself to being episodic, as it focuses on a different Scream Queen for large sections -- there's the Brinke Stevens episode, the Linnea Quigley episode, the Michelle Bauer episode (though by the time Bauer really becomes a player, the larger story has started blending together; she shares a lot of her screen time with Duff and Lovell). Though it at least attempts dark and atmospheric, the photography has a kind of flat, shot-on-video quality to it that works for a series but less so for a feature, meaning Trophy Heads feels less like a "movie" than a lot of the '80s cheapies to which it is paying tribute -- movies like Sorority Babes in the Slimeball Bowl-O-Rama and Nightmare Sisters and Slave Girls from Beyond Infinity. It feels built for television. 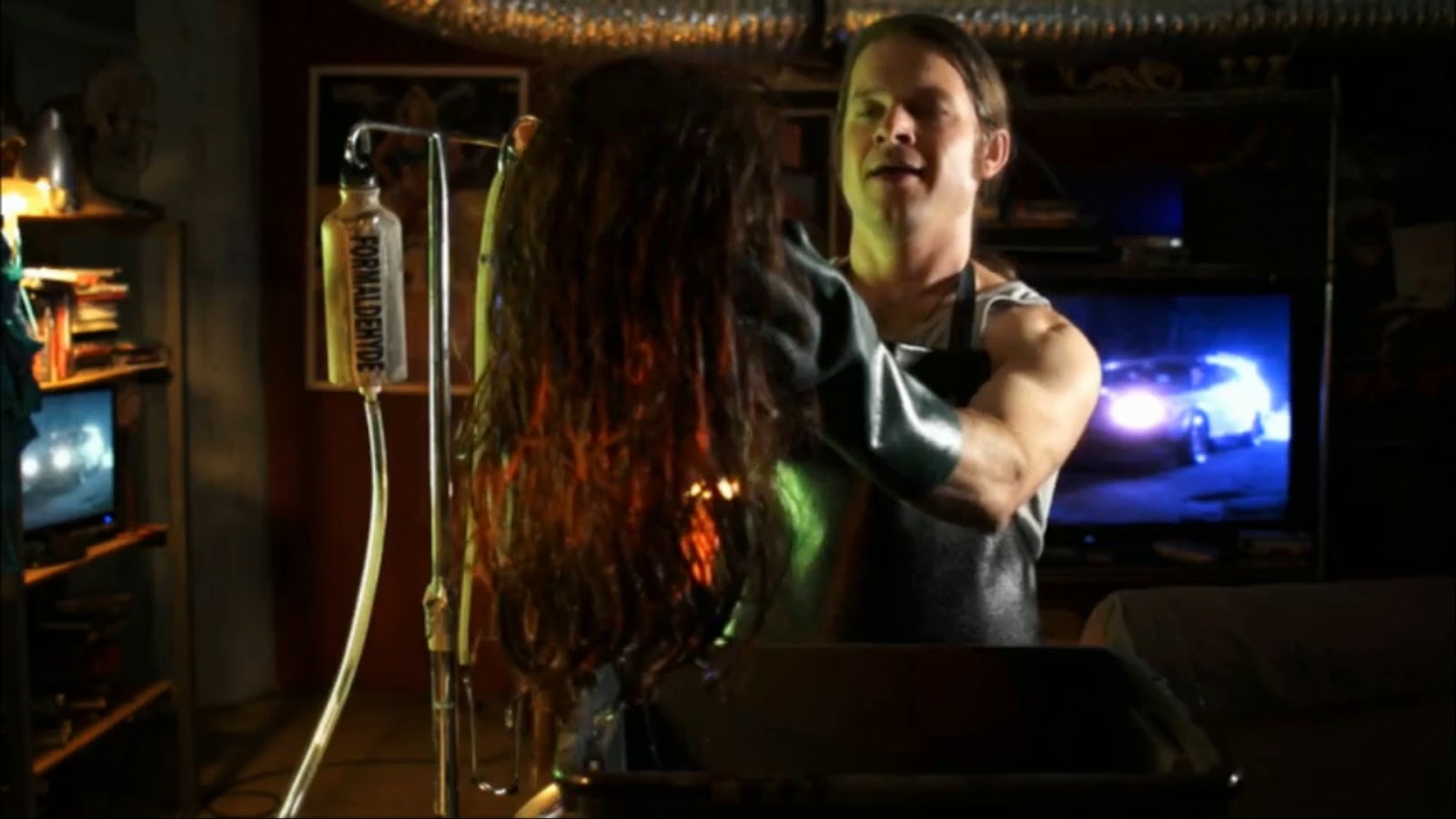 And, yet, watching it all strung together as one single feature, it all plays better. Working from one of the best scripts he's had in a while (from first-time [published, anyway] screenwriter Roger Barron), Band directs Trophy Heads with a good deal of nuance. That's a rare thing; much as I have affection for Full Moon movies, "nuanced" is not something I'd typically call them. And yet Trophy Heads shifts tones and even sympathies around fairly effortlessly. First, Max is the butt of the joke -- the stereotypical fanboy sitting around in his underwear and watching TV in his mother's basement -- but then he gets a monologue about how the things he loves are all going away and he feels powerless to stop it. As a fan of both these kinds of movies and physical media, it's impossible not to relate. That's rather ingenious, using our own fandom against us. The movie then shifts back to being mostly comic for a while, buoyed by the banter between Brinke Stevens, Linnea Quigley and Irena Murphy, a newcomer playing a massage client who spends pretty much all of her screen time naked.

Halfway through the Quigley segment, though, Trophy Heads shifts gears again as it becomes her turn to play Max's game and he dons a genuinely disturbing mask (part skull, part...bear?) meant to invoke Quigley's own Creepozoids. The scene embraces real horror in a way the rest of the movie -- which tends to be funny and self-aware and sometimes a little campy (which is impossible to avoid when working with a cast of '80s Scream Queens asked to dress up in 30 year-old outfits and run around terrified) -- does. Quigley, in particular, makes the moment work. Her terror feels real. It's not played for laughs, and though she has been the subject of many jokes to this point (her conversion to "Sister" Quigley has everyone irritated and rolling their eyes), there is very little that's funny about the way her fate plays out. There is a quick tension-relief joke in which Quigley finally cracks and breaks her "no swearing" rule, but even that is born out of a genuine sense of fear and rage. Trophy Heads is fun for a while, but the Quigley sequence tells us that the movie isn't just fucking around. 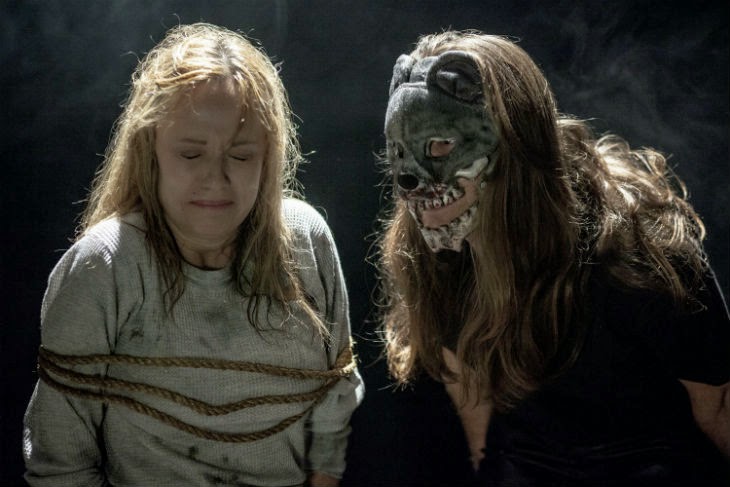 Then the movie takes one more turn towards its strongest material, and it's here that we realize that everyone involved really knew what they were doing with this one. A room of actress gather to audition for a new Stuart Gordon movie (he plays himself as alternately bored and annoyed; it's funny given just how sweet and gentle Gordon is in real life), including Denice Duff of the Subspecies sequels, Jacqueline Lovell of Head of the Family and Robyn Sydney of both the Gingerdead Man and Evil Bong series. Every actress has fun with her image, and the dynamic between Duff (who takes herself and her work with Full Moon very seriously) and Lovell (who doesn't miss an opportunity to take the piss out of Duff, pointing out that even the Subspecies series follows Charles Band's usual formula of boobs, blood and monsters) pushes Trophy Heads into the realm of pure comedy. Their dialogue is very funny, their delivery even funnier -- Duff's prim self-seriousness and Lovell's eye rolling make them a great onscreen duo.

There can be little denying that Trophy Heads works primarily for Full Moon fans, which is why it makes such good sense to serve as the studio's first original content made exclusively for Full Moon Streaming. It works as both a celebration of and an indictment of the obsessive cult that exists around these movies, and it's their most meta movie since Gingerdead Man 2: The Passion of the Crust (which features one of the all-time great Full Moon characters in Haunted Dildo). In addition to the classic Scream Queens all playing themselves (and, as I have failed to mention it to this point, it should be mentioned how funny Michelle Bauer is in the movie, particularly when she's forced to sit between Denice Duff and Jacqueline Lovell as they bicker), there are cameos from many ghosts of Full Moon past. There's Stuart Gordon sending up his nice guy image, there's Kristine DeBell of Alice in Wonderland: An X-rated Musical Fantasy and Carel Struycken of the Oblivion movies and even a funny cameo from director David DeCoteau, shown counting out coins to buy a juice (a funny commentary on the usual cheapness of DeCoteau's many, many movies). There are jokes about the Full Moon catalogue, there are callbacks to scenes from the movies. The whole thing is a big, entertaining and self-aware tribute to the studio's legacy that's also an ingenious idea for a horror movie: crazy fan takes his love of movies too far and kills people the way he's seen on the screen. It's basically Full Moon's Fade to Black, only funny. 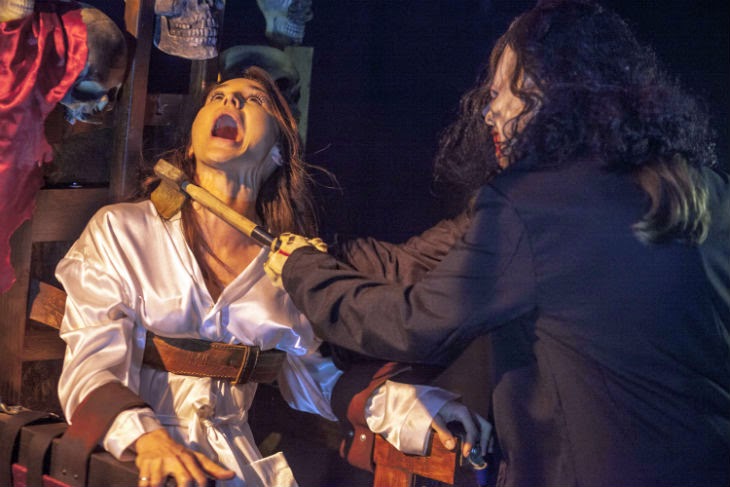 Trophy Heads is currently available in its original five-episode format on Full Moon Streaming, as well as edited together as one 86-minute feature. The version is now out on Blu-ray from Full Moon, the disc of which also features several cool extras: there's a commentary with Band, Brinke Stevens, Jacqueline Lovell and Darcy DeMoss (who SPOILER is killed off in the first few minutes of the show/film) and a "Videozone" featurette that contains a bit of behind the scenes footage. I love this inclusion for two reasons: 1) I love that Full Moon is still shooting Videozone pieces even for their new releases, as the original Videozone segments on their VHS releases helped invent the idea of laserdisc and VHS special features and 2) at one point during the Videozone piece, Band is being interviewed and the light that's pointed at him goes out. Band says fuck it and continues with the interview. It's Full Moon's approach to filmmaking in one perfect little moment -- no, it's not going to be perfect and things are going to go wrong, but the show must go on. Also included on the disc is about 25 minutes of uncut behind-the-scenes footage (which at least this time is from the actual feature; the "uncut footage" on the Doctor Mordrid Blu-ray is just outtakes of Charlie Spradling trying -- and failing -- to record a Full Moon promo...not that I'm complaining) and a montage of fans who submitted photos to have their heads mounted Trophy Heads-style.

I love Trophy Heads, but it's not something I would recommend to just anyone. It's a movie made strictly for for Full Moon fans -- the kind of people who might read a regular column like this -- who will appreciate the references and dig the kind of "reunion" vibe that Band has created by getting these actresses back together after so many years. It's not that casual horror fans wouldn't "get" the movie; it's that they probably wouldn't care. But for those of us who have spend the last 30 years watching Charles Band's movies and loving them enough to keep coming back (and to even sign up for his streaming service, which is how we could see Trophy Heads in the first place), it's a fun and sometimes fascinating blend of comedy and horror, the real and the fantastic. Even though it's largely about looking back instead of forward, it proves that Charles Band and Full Moon still have gas in the tank.

Got a movie you'd like to see covered in Full Moon Fever? Let us know in the comments below. And sign up for Full Moon Streaming here.
Posted by Patrick Bromley at 5:00 AM