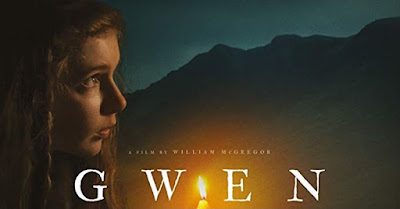 This is what The Witch hath wrought.

Gwen, the feature filmmaking debut from writer/director William McGregor, is part of a growing trend in the horror genre: that of the folk horror film. It kicked off properly with The Witch a few years back, but we've seen it since in movies like The Golem, Apostle, Hagazussa, and even elements of this year's Midsommar. It is very beautiful and meticulous and deliberately paced, but also sometimes laborious and a little stuffy. This isn't slow-burn horror. This is no-burn horror. 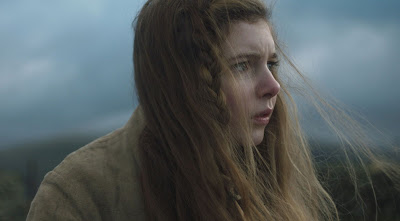 Eleanor Worthington Cox plays the titular Gwen, a young girl living with her mom and kid sister in Wales during the 19th century. Her father is off fighting a war, leaving behind the three women to tend to the family farm and fend for themselves against a cruel environment and a village that seems to resent them. Gwen's mother Elen (Maxine Peak) is a mysterious figure, seemingly involved in bizarre goings on but tight-lipped about it. At the same time, the women experience a curse-like run of bad luck: their crops are dying off, their sheep are slaughtered in the night, and Elen begins experiencing a strange illness that causes seizures, but the family hasn't the money they need to pay for her medication.

And then...well, that's pretty much it. There are some developments later in the movie which I won't spoil, but Gwen is almost all setup and very little payoff. I'd call it a character study, only we don't get to learn much about the characters. Gwen is more or less static, reacting more than acting. Elen is the most interesting character in the film but we know so little about her by design -- she becomes interesting by subtraction rather than addition. I'd call it an exercise in dread, but there aren't enough breadcumbs laid for that to be the case; we know something is going on, but aren't given the feeling that it's all building to something horrible and unavoidable, which is how dread works. 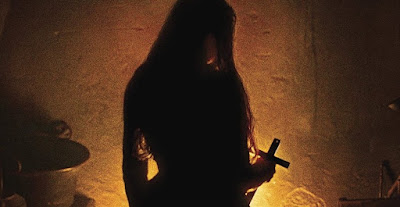 All of this is to say that Gwen isn't especially interested in being a horror film, but rather a period drama with some horror trappings. And that's ok! It's very well made and exactly the movie it wants to be, even when that movie is not really my kind of movie. To accept Gwen on its own terms is to appreciate it more than enjoy it on any kind of visceral level, because this isn't a visceral movie. It's interested in painting a gorgeous picture of a certain period and a certain kind of life and suggesting something darker without ever spelling it out. It does all of those things with precision and skill. If that sounds like something you'd be into, it's available on Blu-ray and will be streaming on Shudder in the coming months.
Posted by Patrick Bromley at 12:00 PM