A Movie I'm Thankful For: MEMORIES OF MURDER 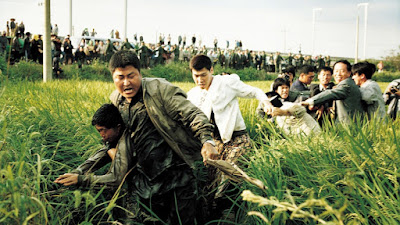 “There’s a reason why people say I have a shaman’s eyes.”

One of the best parts about delving into a hobby for so long is that you get to plumb the breadth and depths of it. One of the happy accidents of this pastime is that South Korea, the land of my birth, has developed into a rich and vibrant source of world cinema in the past few decades. Watching director Bong Joon-ho’s Parasite earlier this year made me ponder my favorites of his work (and in Korean cinema in general): Memories of Murder (2003), about the first serial murders in the history of the country, put director Bong on the map, and helped propel the wave of Korean cinema internationally. 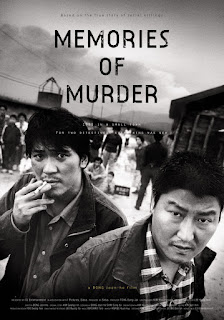 Even at this early stage of his career (this was his second feature), we can see what would become hallmarks of director Bong’s work: an abundance of interesting action within each frame, subtle camera movement, and a cheeky sense of humor. Critics have made particular note of his use of ensembles in many of his films, which usually include frequent collaborator Song Kang-ho (The Host, Snowpiercer, Parasite).

Despite the presence of a well-established actor like Song, I enjoy that Bong’s movies usually have so many integral parts; there aren’t “small roles” in importance. In Memories of Murder, Song’s role as small town detective Park and his big-city counterpart, Detective Seo, have the most screen time, but there is a slew of important roles including the beleaguered police chief (Sergeant Shin), the mentally limited suspect (Baek), an impulsive subordinate (Cho), and the female officer (Kwon) who makes a key break in the case. Bong doesn’t isolate his characters to heighten their importance, but often puts them all in the same frame, in the same scene, to let their conflicts and preferences push the narrative forward, introducing all sorts of contrasts and dualities. There’s so much going on, and it often leads to rewarding re-watches because there’s always something I missed. 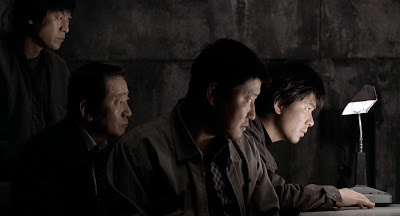 The most obvious contrast is between the two main detectives, Park and Seo. Detective Park is a somewhat hapless small town cop who, though conscientious about his job, equally enjoys drinking, ordering people around, and being the big fish in a tiny pond. This status is threatened by the arrival of Detective Seo, a younger but more experienced and educated man, and has come from the big city to volunteer in the investigation because of his own curiosity. The tension surfaces because Park isn’t used to the level of accountability that another detective imposes, and Seo doesn’t know the people or the environment, and both are unmanned by a series of crimes that outstrips either of their experiences.

Their relationship reveals the contrasting ideas within the story, like the clash of rural and urban culture, the importance of tenuous memory to hard evidence, and the unlikely juxtaposition of authority and incompetence. The detectives are so unprepared to handle the complexity of the murders, and we see how their normal methods of investigation, like Park’s intuition and doggedness and Seo’s meticulous logic, just aren’t enough in a case like this. So, they end up acting like most people do when overwhelmed: like a bunch of idiots. They get drunk. They get violent. They squabble and turn on each other. They demean the very people they’re trying to protect. They use… underhanded ways to obtain evidence. And while our ostensible heroes are seemingly wasting their time on useless in-fighting, the killer is still on the loose. I love that the movie shows the flaws of its heroes, but manages to retain the audience’s sympathy, because who hasn’t been in an impossible situation before? Who hasn’t been stuck on a problem?

To relieve some of the narrative pressure, Bong mixes in his trademark black humor. My favorite recurring visual gag is the flying karate kick out of nowhere. I’m not saying you should watch the YouTube compilation of flying kicks from this movie; I’m just saying it’s out there. The outlandish nature of the kick is an example of Bong playing up the incompetence for humor. Especially in our current understanding of how the police should handle investigations, it seems crazy to think that witnesses would be beaten, or crime scenes would be trampled, or evidence would be mishandled; we’re so used to slick police procedurals where the good guys get by on moral fortitude and technology that allows them to “enhance” until they get the culprit. 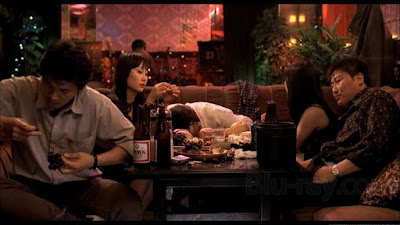 A conversation about Bong Joon-ho movies isn’t complete without a mention of Song Kang-ho. He’s an actor that I enjoy every time he shows up on screen, partially because he doesn’t always show up as the same character. He’s played intense anti-heroes, villains with hidden, dangerous intentions, and broad, vaguely dumb father figures. I’m not sure if I can name a Hollywood actor with the same everyman charm while retaining a flexibility in range. Brad Pitt has the range, but is too handsome to be an everyman. Tom Hanks is the affable everyman, but doesn’t feel dangerous enough. Matt Damon might be the closest in terms of career arc and screen presence, but is probably too much of a movie star. I love that throughout many of his roles, he’s able to turn on the charisma depending on what the role needs. There’s an instinctive quality he brings to the role of Detective Park, a petty man who ultimately tames his impulses to reveal an integrity that makes him the heart of the movie. In various interviews that coincided with the release of Parasite, director Bong says of his collaborator that “[Song is] a genius… he has this spark that you can’t predict from moment to moment” and that Song acts as if he’s in a documentary film, and so acts like a real person would, making “every moment vital.” 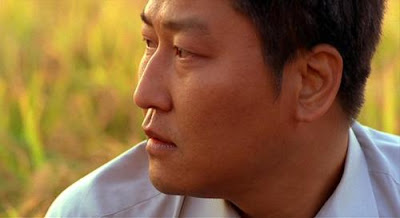 Based on the success of Parasite, Neon, the movie’s American distributor, has acquired the rights to Memories of Murder and plans on a theatrical re-release and a Blu-ray. After scrounging around for years to try and find it, I am most thankful that more people can enjoy some of Bong Joon-ho’s finest work.
Posted by Patrick Bromley at 5:00 AM