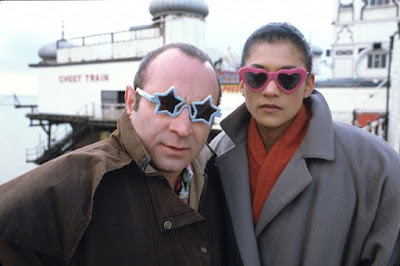 There’s a scene in the 1990 Teenage Mutant Ninja Turtles movie that my boyfriend loves to quote in weekly (or sometimes daily) conversation. Casey Jones is confronting members of Shredder’s Foot Clan, and one of them describes their gang as a family.

“You call all this, here, and that, down there, a family?” Casey Jones gestures, incredulous. It may not make sense to Elias Koteas in a hockey mask, but the point remains: If you’re the type of bedraggled scoundrel who’s alienated most of society including your own flesh and blood, you look for that feeling of home and belonging in some unusual places. And once that bond is forged, you’ll protect it with your life. I’m thankful this Thanksgiving season for a movie about a man (Bob Hoskins) in search of family.

When Mona Lisa opens, George (Hoskins) is crossing a bridge on foot, carrying a package under one arm. The soundtrack plays Nat King Cole’s song “Mona Lisa,” and the sun rises over a picturesque London. George makes a couple of stops—first to sit on a park bench under a tree, then to pick up a bouquet of yellow flowers from a grocer. Both scenes are shot from ground level, with leaves and pieces of newspaper blowing across the ground while we view George from a distance. This camera angle is our first clue that the movie and its characters aren’t exactly high society types—we’re going to be seeing the grit and grime up close and personal here. 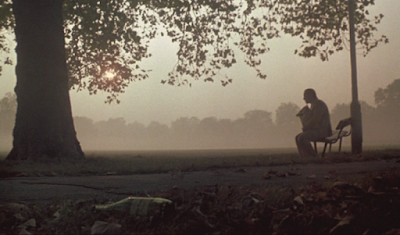 Before long, George arrives at his destination and rings the doorbell. A teenage girl answers, he asks for her mother, and suddenly we’re witnessing a fight/screaming match between George, his (ex?) wife, and his daughter. The neighbors gather to gawk, the flowers get tossed violently aside, and soon George is being pulled out of the violent fray by his pal Thomas (Robbie Coltrane, aka Hagrid from Harry Potter). Thomas escorts George to visit his former employer at a local club, but not before stopping off at a pet store where George purchases a white rabbit. (Spoiler alert: The bunny doesn’t get harmed in the making of this movie, in case you, like me, get anxiety whenever an animal appears on screen.)

The movie never bothers to really explain the events that led George to this point, other than a brief reference to George serving time in jail for his boss. It also never explains why George decides to give his boss a white rabbit, but I like to think the rabbit serves as a metaphor for George’s innocence and also that he’s trying to transform his existence from something empty and dark to something magical and surprising, much like a magician pulling a living rabbit out of a black hat. Plus, George is about to enter a world he’s never encountered before—a little bit of Alice in Wonderland, you might say.

George’s new orders are to serve as escort to an escort—that is, he’s the driver and bodyguard for a prostitute named Simone (played by Cathy Tyson) whose clients are influential businessmen that frequent glamorous hotels. Simone first appears in the hotel balcony in a shimmering raspberry gown, gold and pearl earrings, and an elegant side ponytail. She’s midway through pulling on her trench coat, and she’s decidedly not smiling but has a look that belies wisdom and guardedness. She sees George before he sees her. 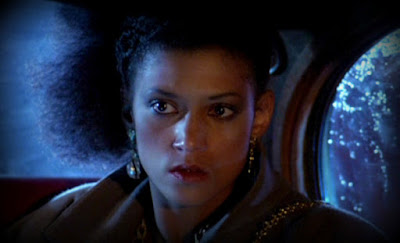 At first, the two can’t stand each other. He thinks he’s better than her because she’s a “tart,” as he tells his friend Thomas; she thinks he’s uncouth and low class and needs to learn how to dress. But of course over time, their dynamic changes. George softens toward her, and she comes to appreciate his fiery protective streak. She even takes him shopping for clothes so he won’t stand out so much in the fancy hotel lobbies while he waits for her. That sequence almost plays like a gender swapped Pretty Woman—this time the prostitute is buying the man a whole new wardrobe at the pricey shops. She has two things he doesn’t: money and taste. At first he’s skeptical, but eventually he gives in.

While George spends his nights driving Simone around, he spends his days secretly picking up his daughter from school and hanging out in his friend Thomas’s garage. The two men have a sweet, hilarious relationship—Hoskins described the feeling on set as “a pair of old vaudeville queens” who couldn’t get through a take together without laughing. You can see why. Robbie Coltrane’s this massive dude rocking a mullet and hawking odd merchandise that probably fell off the back of a truck, including glow in the dark Virgin Mary statues to whom he apologizes for George’s swearing, and life like renderings of spaghetti made of plastic that are supposedly the next big thing in the art world. The guys bond over jokes and mystery novels, and George weaves a tale of his time with Simone into a narrative that involves nuns and opera singers and mythical morality drama. Thomas hangs on his every word, and contributes his own bits to the ongoing saga. He also sticks by George’s side, sometimes driving him places and other times cooking for him. 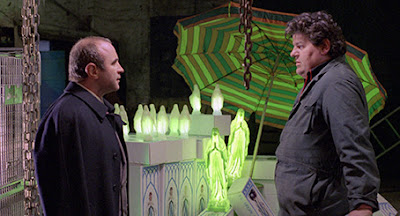 When it becomes clear George is starting to fall for Simone, she lets down her guard a little and tells him about a young girl named Cathy she used to know when she was still working the streets. She thinks this girl is in danger, working for a cruel pimp who profits off her drug addiction and sells her to the highest bidder no matter how bad their intentions. Simone tells George she can’t risk being seen in the seedy places Cathy might be, but she thinks he might be able to blend in there. He accepts his mission with great solemnity—after all, he has a teenage daughter himself and his paternal instincts remain intact.

The journey into the seedy underbelly of London to find Cathy exposes George to some very unsavory places and characters. Even though we know he’s a criminal, he often seems to be naïve about the depths of evil that exist in the world. He seems to wince and shrink back from certain situations and scenes, indicating his discomfort with the whole thing even as he’s keen on finding Simone’s friend and rescuing her from whatever danger she’s in. Director Neil Jordan insisted on shooting on real locations—peep shows and strip clubs and porno clubs; and he also hired real strippers and prostitutes to appear in those scenes in addition to a few actors. There’s no glamor here, just sadness and desperation under neon lights.

I won’t tell you where the movie goes from here; you deserve to find that out on your own. But I will tell you that it’s both unexpected and perfect as a final chapter to this story. And I’ll tell you that it examines what family means, not just for George but for a few other characters as well. It made me thankful for my own family—both the ones I’m related to and the ones I’m not.

This movie made me thankful for a few other things too: For starters, Bob Hoskins, who I’d previously known mostly for his roles in Who Framed Roger Rabbit and Hook, who describes himself on the commentary as “five foot six with the face of a Brussels sprout.” I’m now going to seek out more of his early work, in particular The Long Good Friday, because it’s become clear he’s an actor with a lot more depth than I realized. It also made me thankful for Neil Jordan, a director whose work I haven’t explored much. His writing and vision really stood out in this movie, and I’m eager to see more. I also MUST see more Robbie Coltrane movies, and more Cathy Tyson ones too. She was a revelation—I can’t believe this was her first feature film. She really knocked me out. I haven’t even mentioned Michael Caine yet, but he plays the head honcho crime boss and that was a nice change of pace from the soft spoken Alfred of the Batman universe. 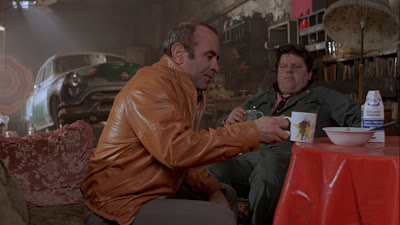 One more thing that I’m thankful for: The Criterion Channel. It’s how I came across this movie, and it’s one of the few ways to see it because it appears to be a little tougher to track down in physical media form. Last year at this time, we were mourning the loss of Filmstruck; I still miss it but this is the closest thing you will find. If you haven’t taken the plunge, consider that it’s got over a thousand movies—some of which are out of print—to choose from and that it’s curated and arranged in cool little categories and that it includes lots of featurettes and shorts too.

Everyone’s talking about Disney Plus, but I’m pretty sure that for me, anyway, it doesn’t hold a candle to Criterion Channel. They aren’t paying me to say this, I just want to make sure everyone knows it’s out there and very worth the money if you have it to spare. Just this week, I’ve used the channel to catch up with Five Easy Pieces, The Decline of Western Civilization 1 & 2, Odd Man Out, Meet Me In St. Louis, and of course Mona Lisa—once the usual way and once with commentary.

My final thank you, for now, is to F This Movie!. I’ve come to really love this community and all the readers and contributors, the podcast, the articles—I’m so thrilled to be able to enjoy it as a fan, let alone as a contributing writer. So thanks, pals. I’m really glad that, to quote Gustave from Grand Budapest Hotel, “There are still faint glimmers of civilization left in this barbaric slaughterhouse once known as humanity.”
Posted by Patrick Bromley at 12:00 PM