On this Thanksgiving week, our minds naturally turn to Universal Monsters.

I’m in Hell-A this week, visiting my wonderful son and observing the American Feast of Raucous Overeating and Overly-Loud Political Debate. My lovely wife noticed a few weeks ago that the celebrated Natural History Museum of Los Angeles County opened a new exhibit in October, celebrating the classic Universal Monsters. NHM is in a unique position to host such an exhibit because they were the first museum to recognize the value of movie memorabilia and started lobbying the major studios for donations as early as 1930. NHM has some unique items in its collection.

So yesterday when I found myself a short Uber ride from the museum, how could I resist? 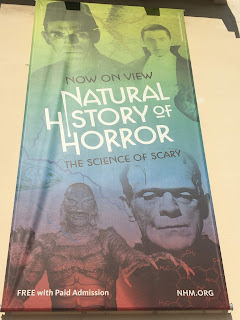 Though the special exhibit is small, it is well worth a visit if you’re in the LA area. The theme of the exhibit is “The Natural History of Horror: The Science of Scary,” and I guess the museum-required “edumacational angle” is to put everything in context of how contemporary science influenced these works of film. Some of this is unnecessary; some of it is fun. Some of it is just wrong. Who am I to judge? If talking about galvanization experiments in the 1700s or the discovery of the coelacanth make this exhibit a reality, great! They have real props here from Universal horror films and that is all I care about. 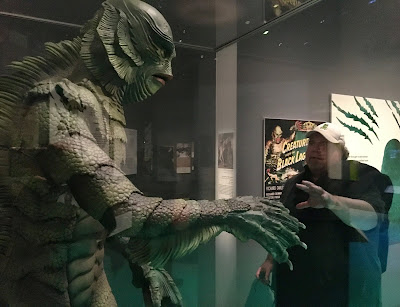 Walking into the exhibit I immediately ran into an old friend: a life-sized Creature from the Black Lagoon, looking exactly like the one in the original film. Not far away, they have a casting pulled from the original mold of the Creature’s head in 1954. The explanatory text located next to the bust takes pains to explain that Millicent Patrick was the real creative genius behind the Creature’s look, not Universal make-up head Bud Westmore, who wrongly claimed credit for the design for decades. Copies of Molly O’Meara’s recent book about Patrick, Lady from the Back Lagoon, are available in the museum gift shop.

TANGENT: It cost my wife and $15 apiece to get into the museum. Although we also wound up checking out the “Mammals of Africa” and “Mammals of North America” exhibits (Dioramas? YES, PLEASE.), we were really only at the museum to see the Universal stuff. Shouldn’t they offer special pricing for monster kids where it’s only one dollar to get in, but you promise to spend at least $15 in the gift shop? I think so. Then they should put more monster stuff in the gift shop. Then I should buy all the monster stuff, and also they should give me more monster stuff, then make up more for me to buy online later. A real missed opportunity, in my opinion! 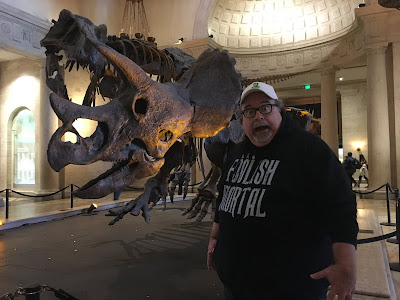 The small but nicely rectangular room also includes displays devoted to Frankenstein, featuring a ball and chain prop that didn’t appear in the final film; the Mummy, featuring Egyptian vase props that did appear in the final film; and Dracula, featuring the star attraction of the entire exhibit: the articulated bat puppet seen “driving” the carriage at the beginning of the film, and on Helen Chandler’s balcony halfway through the picture.

THAT BAT ALONE IS WORTH THE PRICE OF ADMISSION! “WE STUDY HISTORY, DR. JONES, THIS IS HISTORY!”

Plus, just look at his little face. 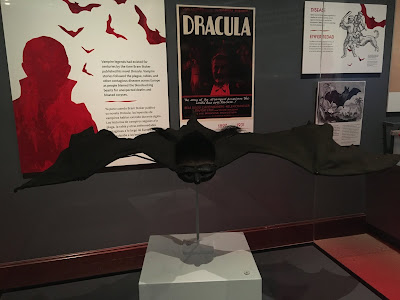 TANGENT: Since the exhibit opened, the museum staff has discovered in their holdings a broom and pitchfork used in The Bride of Frankenstein—but alas, they discovered them too late to add to the current exhibit. I hope this exhibit is popular enough, and sells enough merchandise in the gift shop, to justify a larger exhibit celebrating these classic monsters (and the rest of the crew) as history or folklore or popular culture. This is a possibility hinted at by the friendly chap selling the tickets. 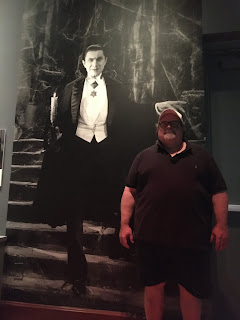 I am an optimist, so I can easily imagine a mega-exhibit five times the size of the current one. Someone call Bob Burns and arrange for a loan-out of part of his amazing collection! I would gladly curate this imaginary extravaganza for free. I have a literally an unlimited amount for free time and a unique zeal for the subject! And I would immediately get to work on that Monster Kid discount.

Happy Thanksgiving.
Posted by Patrick Bromley at 5:00 AM