A Movie I'm Thankful For: THAT THING YOU DO! 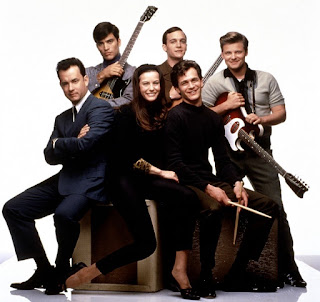 How ballsy do you have to be to bet your entire movie on a song? I mean, there’s no accounting for taste, and how do you know — I mean, KNOW — that a song is going to be ear-wormy enough to satiate a rowdy audience for 108 minutes? You’ve gotta be Tom Hanks ballsy, that’s how ballsy you have to be. America’s Dad knew what the hell he was doing when he dreamed up That Thing You Do!, his 1996 love letter to Beatlemania, the rags-to-riches archetype, and Steve Zahn’s goofy grin. It’s the rare Perfect Movie, a complex, alchemical cocktail of charm and genius that reminds us just how joyous this hellish trash fire of a world can be if we’re looking at it through the right set of eyes. It was one of the first movies that was ever mine, a movie I grew to love without prompting or persuasion, without parental influence or probable cause. Anyone remember VH1’s Movies That Rock? VH1 was this network for old people that was owned by the MTV company but not technically MTV, you know? Anyway, they showed this movie every goddamn week, and after two or three viewings, I was in love. 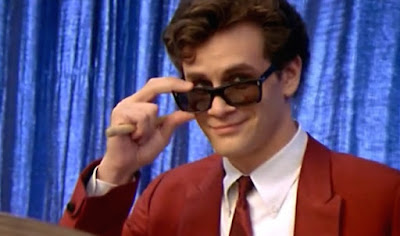 Because That Thing You Do! entered my life just around the time I became a musician. Not a real one, mind you; I can’t read music or tell you a single thing about theory. I grew up on punk rock, which means I can strum and slam my way through power chords without the slightest inclination toward scales or rudiments. I grew up watching and imitating. I took lessons, and all, but, I don’t know — it just didn’t take. I’ll tell you this, though: Guy Patterson (Tom Everett Scott) taught me to love the drums. See, the thing was that my dad played guitar. I wanted to be him, so I learned guitar. And I’m not bad. But the guitar has never inspired me. The drums, though, they grease my skids. They butter my toast. I feel percussion. I don’t think about it. I find the goddamned groove and I let it consume me. You know who else does that? Guy Patterson. Skitch. Spartacus. He just wanted to play the drums. He felt music the way no one else in The Wonders (Johnathon Schaech, Steve Zahn, and Ethan Embry) really could. He joined the band and made them better. He made “That Thing You Do!” — a song originally conceived as a dry ballad — into a hit record.

So what makes a Perfect Movie? A tight screenplay, for one thing. Notice how Hanks repeats patterns in That Thing You Do!’s second act: “You boys look good in red/gold.” “You have your pick?”/”You straight on those harmonies, now?” Also, you notice how your brain tricks you into thinking you hear “That Thing You Do!” a thousand times? You hear it fewer than three times, actually. But the magic is that you hear a different version on every go: The slow, melodic one in Jimmy’s garage. Then the shaky, uptempo one at the talent show. Finally, the polished version at the nationally-televised variety show. The other times are just glimpses and pieces. The gist of it. You know what else makes a Perfect Movie? The characters. The performative moments between important plot points. Lenny (Zahn) and his presidential flashcards. Faye (Liv Tyler) and her thousands of kisses. Jimmy (Schaech) and his principles. “Hey Guy, weren’t you the drummer in The Echos?” What about the Patterson family’s hopeless crusade against Telemart? You don’t NEED to put these things in a movie, but they always, always make it better. Homier. Comfier. They make it last forever. 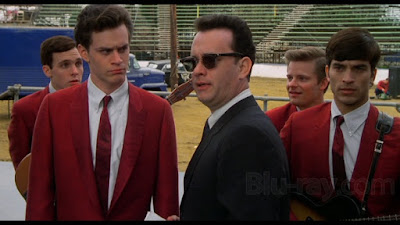 In case you can’t tell, That Thing You Do! is in my DNA. It’s in my Top Ten. It’s a Handshake Movie. The title song’s opening bars are the very first thing I play each and every time I sit down behind a drum kit. If no one stops me, I dive into “I am Spartacus” and see if anyone recognizes it. No one ever does. Oh, man. You want to know something embarrassing? When I was in middle school, I tried to get people to call me Spartacus. Oh yeah. It was bad. But That Thing You Do! was (and is) worth it. Like Say Anything…, High Fidelity, Star Wars, and Jurassic Park, I grew up with That Thing You Do! We grew up together, really. Unlike me, though, That Thing You Do! hasn’t aged a day. It’s gorgeous and singular. It’s hopeful and learned. It teaches us without resenting us for our innocence and presumptuousness. “It’s a very common tale,” says Mr. White (Hanks). “One hit Wonders.” Practiced and staid though he may be, Mr. White is one of the good guys. He joined Play-Tone because he believes in the artist. He believes in the music. He’s a champion. I’d love to meet him. I believe, too. 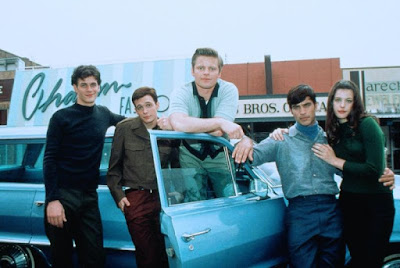 That Thing You Do! is more than a movie I’m thankful for. It’s a movie that defines me. It’s a movie that I watch when I’m sick, when I’m sad. It’s a movie I’ll pass down to my son, once he’s ready. Once he learns to feel the music the way I do. You can’t trust someone who doesn’t feel the music, and I’ll teach him to evaluate any prospective companion accordingly. Wait. Before you go, I need to explain why the That Thing You Do! soundtrack is a lesson in mid-century music appreciation: “Mr. Downtown” is a noirish dirge that recalls your grandfather’s heyday. “My World is Over” is Diane Dane’s (Chaille Percival) eulogy for ‘50s romance. The Heardsman’s “She Knows It” is Beatle-sploitaton at its best and brightest. Even “I Need You (That Thing You Do),” while far too modern to be the title song and appropriately relegated to the closing credits, is a kind of commentary on the whole enterprise. It’s telling us that, while time goes on, while styles change, the gist of it all remains the same: Find the beat, find the girl (or whomever you choose), and play it loud. Who are we to argue?
Posted by Patrick Bromley at 12:00 PM

Email ThisBlogThis!Share to TwitterShare to FacebookShare to Pinterest
Labels: 1996 movies, a movie i'm thankful for 2019, rock movies, that thing you do, tom hanks