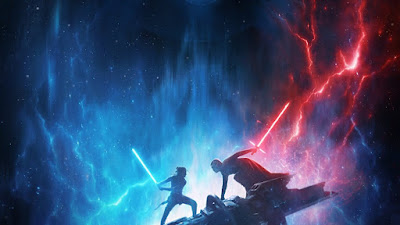 The Skywalker Saga ends with a buffet of empty calories. And that’s fine.

“That’s how they win. They make us think we’re alone,” says Kerri Russell’s Zorri Bliss. The underworld badass is trying to convince her old flame, Poe Dameron (Oscar Issac), not to give up, not to give into the overwhelming power of the nigh-unstoppable First Order. And she’s right: the characters in The Rise of Skywalker succeed by sticking together. Keeping it simple. Playing to their strengths. After the layered, challenging, and self-examining Episode VIII: The Last Jedi, it seems J.J. Abrams and company were resolved to walk the same path: No surprises. No new ideas. Nothing that might cause discord among the Star Wars faithful. In crafting a satisfying ending to arguably the most loved and enduring cinematic franchise of all time, Disney decided to play the hits, and to play them loud. There is absolutely nothing original or experimental about The Rise of Skywalker. It goes exactly the way you think it will. Whether or not that’s an asset or a detriment is entirely up to you. 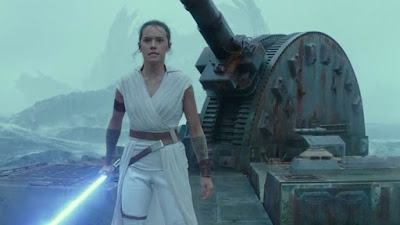 Picking up sometime after The Last Jedi, The Rise of Skywalker begins with urgent news: The long-dormant Emperor Palpatine (Ian McDiarmid) has returned from the dead! Buried deep below an undisclosed location on an uncharted planet, the legendary Sith master is broadcasting a message of terror across the galaxy. While General Leia and her Resistance forces (including Dameron and John Boyega’s Finn) scramble to fight a war shorthanded, Supreme Leader Kylo Ren (Adam Driver) tracks Palpatine’s signal in hopes of cutting the dark lord down before he can rise to challenge his newfound power. Meanwhile, Rey (Daisy Ridley) continues her Jedi training (in a sequence that seems to be aimed directly at the character’s Mary Sue-ing detractors). Though she’s determined to carry on the legacy of the Jedi and her master, Luke Skywalker (Mark Hamill), Rey soon becomes overwhelmed by the feeling that a dark force is swelling inside of her.

Though it rides on rails familiar to even the most casual Star Wars fan, it has to be said that the first hour of The Rise of Skywalker is an exceedingly slick and unrelenting attack on our senses. Characters run and yell and chase and shoot and blast through hyperspace so fast for so long that you would be forgiven for forgetting to breathe. It’s fun! Finn and Poe trade barbs! C-3PO (Anthony Daniels) makes obtuse statements! Rey does Jedi backflips and sort of flirts with Poe! A re-helmeted Kylo Ren drives his angry lightsaber through friend and foe alike! In true Abrams fashion, the film feels determined not to let us think about any one thing for too long. “How did this get there?” “Why don’t they try this, instead?” “What about this thing, over here?” Doesn’t matter! We’re moving on! None of that naval-gazing, cerebral Last Jedi shit here, folks, we promise! If Abrams’ The Force Awakens was a carbon-copy of the original Star Wars, consider The Rise of Skywalker his riff on Return of the Jedi. Again, Return of the Jedi is good, and that may be exactly what you want from a Star Wars movie! That’s completely fine. 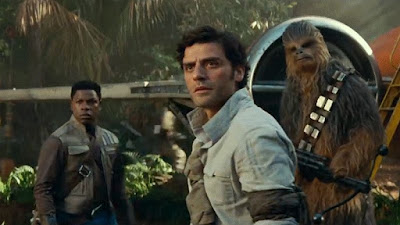 You know what isn’t fine? The utter failure of tenacity and ambition that drove Abrams and his writing team to retcon and/or flat-out bail on nearly all of the most interesting and provocative elements of Rian Johnson’s The Last Jedi. Ren’s helmet — destroyed in The Last Jedi so that Adam Driver could more readily convey his character’s state of conflict — is fixed. Anakin Skywalker’s lightsaber — split in two in The Last Jedi, a visual metaphor for the Force’s ultimate rejection of binary ideologies — is reassembled without so much as a comment. Kelly Marie Tran’s Rose Tico — a character whose arc examined the truly egalitarian nature of the Force — is shelved, limited to about three scenes total. Worst of all — Yup, you guessed it — Rey’s backstory is retconned. And if that wasn’t irritating enough, it’s only after The Rise of Skywalker reaches its climax that it becomes clear it was done so for absolutely No Functional Narrative Reason At All. There’s no point to it. The film works without that twist. Its only purpose is to satiate fans who are terrified of any and all ambiguity. 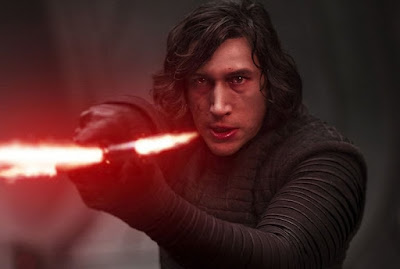 And that pisses me off. It pisses me off that The Rise of Skywalker has nothing interesting to say about the Force, the Jedi, the Sith, or Star Wars, in general. It pisses me off that every conceivable fan theory or shiptease is given screentime. It pisses me off that two beloved Star Wars characters are given measured, impactful demises that end up being nothing more than empty shock moments with zero emotional or narrative consequences. And look, The Rise of Skywalker is a fine movie. It’s well made. It has a few really great moments (one in particular pays off the Rey/Ren Force telepathy in a stand-up-and-cheer fashion). Lando Calrissian (Billy Dee Williams) flies the goddamned Millennium Falcon and Carrie Fisher gets a decent (if unavoidably rushed) sendoff. It is exactly what most mainstream Star Wars fans want to see. And maybe it’s shame on me for hoping that a multinational corporate giant would take another creative risk after The Last Jedi. But I was hopeful. Now, like Poe facing an onslaught of First Order starships, I just feel alone.
Posted by Patrick Bromley at 8:00 AM