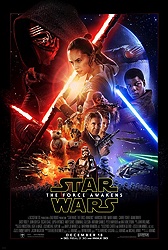 This review of The Force Awakens will be completely Spoiler Free. For a more in-depth and spoilery discussion of the film, tune in to our podcast next week.

What do we talk about when we talk about Star Wars? How do we discuss the merits of The Force Awakens (which, contrary to all of the marketing, does appear in the opening crawl as Episode VII)? Is it enough for it to just be a fun, thrilling space adventure with great characters and exciting action? Or does it need to achieve some sort of constant perfection, wrapping up everything that Star Wars fans love about not just the series but their entire fandom -- nay, their entire childhoods -- inside of two hours? Judged against the second criteria, The Force Awakens no doubt falls short. Any movie would. Judged against the first, however, the movie is a resounding success. It's all a matter of perspective. 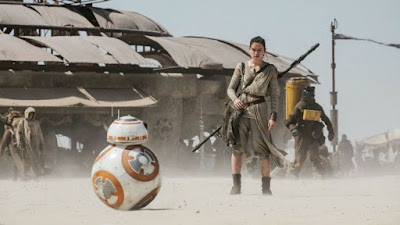 What do we want from a new Star Wars movie? Do we want it to push the story previously laid out in the first six films forward? Do we want it to surprise us? Or do we just want it to deliver the things we want from a Star Wars movie? The Force Awakens tries to have it both ways, advancing the larger narrative (sort of) while repeating many of the same beats from A New Hope. As a story, there's not much 'there' there. Instead, the movie leaps from set piece to set piece, strung together by a very specific McGuffin and depending a lot on timing and coincidence to fill in the gaps. Anyone who has seen Abrams' Star Trek reboot will be familiar with this phenomenon. That means some aspects might not hold up on reflection, but it doesn't matter in the moment. The movie just keeps propelling forward, bringing the space opera back to Space Opera. 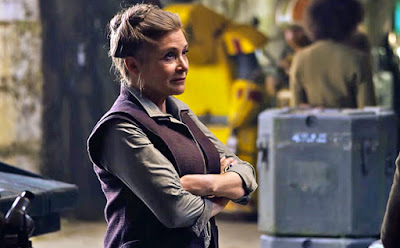 One of the things I really love about The Force Awakens is that despite working within arguably the biggest and most beloved film franchise of all time and under the auspices of the Disney corporate umbrella, Abrams has managed to make a JJ Abrams Star Wars movie. He's not just trying to reproduce Lucas's aesthetic, even though he is willing to play in the same sandbox and often does conjure up imagery that would have been right at home in the original trilogy (including a few moments of blatant fan service that aren't necessary but are also completely inoffensive). His galaxy feels lived in just as Lucas' did, but he frames and moves things in way that's consistent with his past work. The decision to shoot the film on 35mm pays off, as does Abrams' insistence on using as many practical props and locations as he could. Things have weight. When Stormtroopers get shot or are standing near an explosion (I hope that's not a spoiler), they fly through the air and land with a heavy thud. Lightsabers cause visible damage. Best of all, there's a whole lot of humor in the movie -- not forced, not out of place, but true moments of character-based levity. It's hard to watch The Force Awakens without a big smile the whole way through.

About the characters. They are across-the-board great. I don't want to use this space to throw shade at the prequel trilogy -- that's well-worn territory for which George Lucas has been punished enough, and it's not as if the movies don't have a huge number of fans and defenders -- but one of the areas in which those films always fell short for me was in their characterization. They were movies much more interested in being about the world these people inhabited and the machinations of the things that happen to them than the people themselves. The Force Awakens brings back the idea that it's the characters who matter -- they are what we fall in love with and the reason we keep coming back to this series. We aren't there for the Star Wars brand. We are there to spend time with the characters. 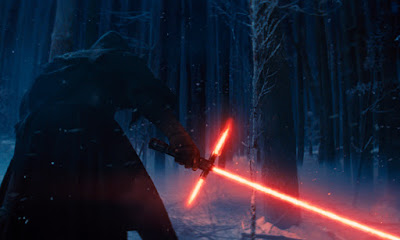 The characters and the actors inhabiting them are worth spending time with. While the screenplay by Abrams, Lawrence Kasdan and Michael Arndt is structured so that it plays a bit like Star Wars: The Next Generation, all of the actors infuse their performances with joy and depth and a sense of an inner life. Daisy Ridley and John Boyega bring such life to their roles, capturing the wonder of discovery and the enormity of their circumstances (which serves a double function, as it also perfectly reflects the real-life actors thrust into superstardom thanks to the franchise). Oscar Isaac brings heroic swagger. I would gladly follow all of them on more adventures, were they to have them. Adam Driver has a challenging role but continues to do interesting work even in the context of a huge blockbuster, and the way he inverts what we've come to expect functions to make his role more than just an echo of something familiar.

As for the returning cast? They're put to good use, some more than others. Everyone effortlessly falls back into step, and I like that the movie doesn't ignore the years they've put on -- in fact, the screenplay hints at a whole lot of stuff that has happened since we saw them around the campfire at the end of Return of the Jedi. Great care has been put into the return of every franchise character, and Abrams is sure each gets a worthy entrance. Actually, "care" is an important word in discussing The Force Awakens. Everyone has taken great care, from the filmmakers to the studio to the marketing team, to deliver the best movie possible. Even if you don't love the movie, you can't really ask for more than that. 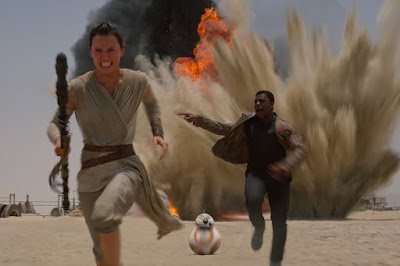 Maybe it's too soon to talk much about The Force Awakens because I'm caught up in the excitement of Star Wars completely dominating pop culture right now and in the joy of experiencing what Abrams and his team have accomplished. Maybe once this dizzy high wears off I'll have more objectivity; after all, plenty of people loved The Phantom Menace the week it came out. Maybe I'll find greater fault in all the parallels between this movie and the original. The thing is, even if that does happen I'm still not going to care. I don't need a Star Wars movie to be perfect. They never have been. Some might accuse Abrams of playing it too safe, but there is a difference between "safe" and "solid." He has made a very solid movie, one which will stand the test of time as a worthy -- even excellent -- film in the Star Wars franchise and which will undoubtedly create a new generation of Star Wars fans. I have a three year old daughter. I can't tell you how much it means to me that she's going to grow up pretending to be Rey.

This is the start of a new era (era) of Star Wars, one in which Disney has promised at least one new movie a year with no end in sight. It's hugely important that The Force Awakens gets things started right, and it does. Abrams has made a movie that reminds us why we fell in love with Star Wars in the first place. If The Force Awakens is a lot like Lucas' 1977 original, that's ok. There are worse movies for the new Star Wars movie to be compared to than Star Wars. As someone who hoped for the best but tried to temper my own expectations going in, it is exactly the movie I hoped it would be. The Force is strong with this one.

Posted by Patrick Bromley at 2:01 AM