“At last the search was over…now he was face-to-face with the killers who had dishonored his wife!”

Decision at Sundown is the third film in the Ranown Cycle—a series of western movies made between 1956 and 1960 that are directed by Budd Boetticher, written by Harry Joe Brown, and star Randolph Scott. Though they utilize a lot of the same sets, filming locations, and actors, they manage to tell completely different stories and explore different thematic elements. I love almost all westerns, but the ones made during the 1950s are endlessly fascinating to me because the genre was in a transitional stage during that time, and I think these Boetticher films are among those that played a huge role in expanding the genre into what it would become during the 1960s and the 1970s.

Even though this is Randolph Scott’s third Boetticher western in 15 months, he’s playing someone a little different in 1957’s Decision at Sundown. We’ve previously seen him as an honorable widower seeking justice (7 Men from Now) and as an innocent man held captive in a tense chamber drama (The Tall T), but this time he’s something of an anti-hero. And because the characters we’re introduced to in this film are constantly evolving as our perspective changes, Scott’s character Bart Allison might not even be considered that by the end of the film. When we first meet him, he appears to be holding up a stage coach. He’s grizzled and unshaven, holding his gun on passengers who were in the wrong place at the wrong time. When a partner rides up to join him, we learn that Scott isn’t necessarily a murderer, but is on a mission of vengeance that is about to take him to the town of Sundown. 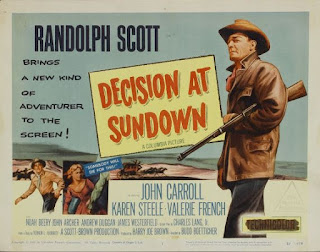 It seems that the Sundown has been willingly taken over by a man named Tate Kimbrough (John Carroll), a smooth talker who everyone seems to like. He’s got the sheriff in his pocket and the women of the town lined up for him, and no one seems particularly unhappy about any of this. To top it all off, he’s to be married the day Randolph Scott rides into town looking for him. Oh, and he also has a mistress (played fantastically by Valerie French) who seems to be the person he really cares about far more than his actual fiancée (Karen Steele). It’s a very complicated dynamic, but it’s an interesting one that is very easy to follow in the film.

Why Bart Allison wants Tate Kimbrough dead is slowly revealed during the film. The tag line on the poster (which is the line I opened this column with) is misleading; things aren’t that simple, and that line seems to have been designed to appeal to a certain audience, but what we actually get is something else entirely. It’s impossible to talk about the plot without spoiling it, and since discovering the motivations of these characters is the whole point of the film, I won’t even try. I will say that the movie is actually a taut character drama that plays out over 77 minutes, and that those coming to the movie expecting big shoot-outs and dusty trails will likely be disappointed. There is minimal violence in the film, and the entire story takes place on the same sets and in the same single street that runs through Sundown. Some westerns go for a wide sprawl, but this one focuses on the small cast of characters that occupy Sundown. It wouldn’t be fair to compare this movie to another film from 1957, 12 Angry Men, because this cheap B-movie can’t (and doesn’t) possibly hold up against the quality of Sidney Lumet’s achievement, but yet that’s the kind of character exploration and drama I think the filmmakers were going for.

The subject matter is edgy, especially for a film from 1957. Instead of straight revenge, this movie explores topics like marital fidelity, obsession, delusion, and how power and authority is often willingly given to those who impress with their presentation. There are no good or bad characters here—not a one—as every single person has admirable qualities as well as obvious flaws. It’s really refreshing to see such depth in low-budget films during a time when these things were made as quickly and as cheaply as possible. These are films with something on their mind. In the special features of the disc I watched, Budd Boetticher is quoted as saying (I’m paraphrasing) that these Ranown films aren’t B-movies, but rather C-movies, as they never played anywhere in Hollywood. Because they were so far off the radar, he was able to put in all sorts of adult themes and character foibles that would never have been allowed in a major studio movie of the time. These are westerns for adults, filled with questions and situations that adults must ask during their own lives. The predicament in Decision at Sundown can’t be solved with a bullet. 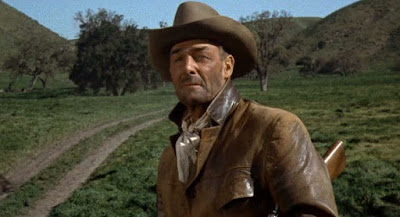 The cast does admirable work, and I’ve become quite a fan of Randolph Scott because of his range. I would have liked him just fine if he were always simply the smiling cowboy; his pronounced cheekbones and dark eyes lend him a boyish quality that I’ve now seen him play against several times, convincingly, and I give him credit for playing against type here. John Carroll is equally likeable as a man that is so charismatic and affable that the people have given him their town; it’s easy to understand how that could happen when you see his performance. He’s a real smooth-talker and maybe a swindler, but also noble in his own way. He’s not a mustache-twirling villain, and he shows both courage and fear when he finds out that Scott’s Bart Allison has come to kill him. Tate Kimbrough is no coward, and it’s hard not to like the guy.

I’ve already mentioned that I thought Valerie French gives a fantastic performance in a role that doesn’t give her a ton to do. Unfortunately, that seems to be the status quo for women in these 1950s westerns. Still, she plays Kimbrough’s mistress with strength and confidence. She’s a woman who knows how the world works, and has a quiet dignity about her. She maximizes every second that she’s on screen and leaves an impression. Karen Steele has even less to do in her role as Kimbrough’s fiancée, who ultimately just isn’t particularly important to the story. It’s a shame, because both female roles should have been deeper, and could easily have been expanded had the movie been longer than its 77 minutes.

There are several fifties and sixties character actors in smaller parts, with the most recognizable being Richard Deacon, who most people would probably know as Rob Petrie’s associate producer Mel Cooley on The Dick Van Dyke Show. If you don’t recognize the name, you’d definitely recognize his face and bald head. Also in this film are Noah Beery, Jr (Sergent York and Red River), and H.M. Wynant (Conquest of the Planet of the Apes). In fact, most of the cast consists of faces you might know as “that guy from that thing.” A lot of these guys spent their entire careers in TV shows that used to run in heavy syndication. 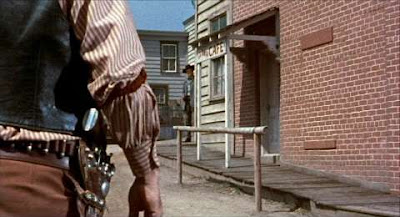 I’m a big fan of these Ranown movies; they’ve got things on their mind, but they never forget that movies are entertainment. Films from this genre and this time period are almost always fun and worth a watch --even when it’s just for pure escapism-- but when they manage to comment on the human condition and can show me the earnest and imperfect souls of the characters involved, they transcend their limited budgets and become films truly worthy of attention.