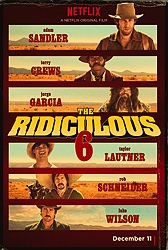 There have been a handful of incredible westerns this year: Slow West, Bone Tomahawk, The Revenant and hopefully the upcoming Hateful Eight. Leave it to Adam Sandler and his Happy Madison garbage factory to spray donkey poo across all of them.

I'm conflicted about The Ridiculous 6, the first Netflix original film in a four-film production deal between Happy Madison and the streaming service. On the one hand, I want to support the idea of alternate distribution models and Netflix premiering original content that isn't just TV series (even though I've enjoyed many of their original series). When a high profile megastar like Adam Sandler essentially endorses the platform to produce and distribute his latest comedy, it bodes well for it becoming a viable outlet for other artists to bypass "conventional" distribution (and all the nonsense that comes with it) and hopefully get their work in front of larger audiences. On the other hand, the fact that Sandler is premiering his latest movie on Netflix gives me hope that his career of making lazy, unfunny comedies is coming to an end and that the well has dried up. Theatrical audiences have grown wise to him, and the diminishing box office returns of his last few movies suggest that maybe they've been burned one too many times by the shit he turns regularly turns out. So as much as I want The Ridiculous 6 to signal a new wave of creating original films, I also want it to be the death knell of Adam Sandler's career making the worst mainstream comedies of every given year. And I don't think the movie can be both things.

Here's the real kicker, too: The Ridiculous 6 is far from the worst movie Sandler has made. It's undeniably bad -- racist, misogynistic, lazy and stupid -- but sometimes in lesser degrees than the usual Happy Madison output. It attempts to tell a story, and the fact that it's a western gives a sense of scope missing from Sandler's usual paid hangouts and vacations. Director Frank Coraci, who previously helmed the Sandler vehicles The Wedding Singer, The Waterboy, Click and Blended, seems to actually be trying to make a movie. He has made a bad movie, but at least there is the appearance of effort on his part. Would that the same could be said for Sandler. 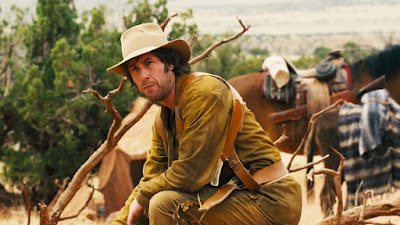 He plays a character named Tommy, a white man raised by Native Americans who is better known as White Knife. When he learns that his father (Nick Nolte) is sick and in need of $50,000 to pay back an outlaw (Danny Trejo), Tommy goes off on a quest to raise -- or, more accurately, steal -- the money. Along the way he encounters and joins forces with five half brothers he never knew existed: Ramon (a Mexican stereotype played by Rob Schneider); Danny (Luke Wilson), who is guarding a tragic secret; Chico (Terry Crews, maybe the only cast member who acquits himself), a piano player who doesn't want anyone to know he's black; Li'l Pete, an idiot played by Taylor Lautner and Herm (Jorge Garcia), some sort of unintelligible weirdo covered head to toe in fur and hair. Along their journey they witness the invention of baseball (courtesy of John Turturro) and play cards with General Custer (David Spade), Wyatt Earp (Blake Shelton) and Mark Twain (Vanilla Ice).

If you haven't already guessed, the cast for this movie is packed top to bottom with familiar faces. In addition to those already mentioned, there's Harvey Keitel, Steve Buscemi, Jon Lovitz, Steve Zahn, Will Forte, Nick Swardson, Norm MacDonald, Whitney Cummings, Chris Parnell...the list goes on. Not one of them is particularly funny, which is a problem in a comedy. Each is given one character trait -- sometimes less than that -- which is then repeated as the punchline for his (I would say "or her," but this is a movie almost entirely devoid of females...more on that in a moment) every scene. Taylor Lautner is stupid and apparently has three nipples, so all of his "funny" lines end with a reference to a third nipple. Terry Crews' character mentions that he can play piano with his dick, so that gets repeated a bunch. Rob Schneider travels with a burro, his every scene ending with a reference to his burro. Oh, and the burro has explosive diarrhea, so several characters in the film wind up getting shit sprayed all over them. I know how they feel. 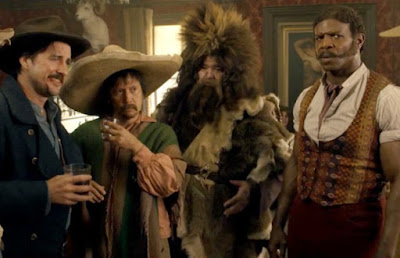 The Ridiculous 6 made headlines during production when several Native American extras reportedly walked off the set, citing what they felt was a racist and demeaning script. It is. This is nothing new for a Happy Madison film. I can't imagine why any Mexicans or women didn't walk off the movie either. This is another in a long tradition of Happy Madison films in which every female character is a grotesque punchline -- a Native American woman named Beaver Breath, for example -- or a ridiculously hot trophy and/or skank. Sandler's wife to be in the film is named Smoking Fox (Julia Jones), while his real-life wife plays a minor character named Never Wears Bra. These three female characters, all defined by the attractiveness and sexuality, are the only women in the film who are not prostitutes. For real. Every other actress in The Ridiculous 6 plays a hooker. At a time when Kristen Wiig and Amy Schumer are starring in hugely successful comedies and Ghostbusters is being rebooted with an all-female cast, it's little wonder as to why the audiences for Sandler's brand of bro-heavy bullshit is disappearing.

As for Sandler himself, he seems almost openly miserable. His performances have defined lazy in his last few films (again, I'm referring specifically to the comedies produced through Happy Madison), in which he stands around his various mansions in jerseys and sweatpants and laughs at anyone who's different from him. Here, though, he doesn't even appear to be in on any kind of joke. Aside from a bit of physical comedy early on reminiscent of You Don't Mess With the Zohan, Sandler mostly just scowls through the movie. I'd be unhappy, too, if I was stuck in a movie this lousy. But as co-writer, he only has himself to blame for the material he appears to resent. 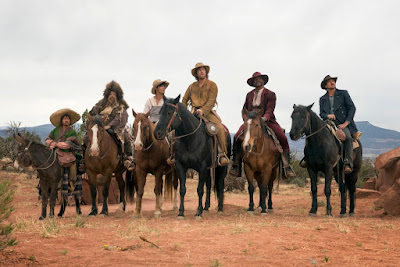 Again, though, it could be worse. Because it also attempts to function as a western (and not a satire of westerns as the production attempted to spin things when explaining away the racist humor), there's some non-comedic material and action to hold one's attention. It's not great action, but it works better than the comedy. Had The Ridiculous 6 gotten further away from the usual brand of Happy Madison suckiness and had leaned more into being a more traditional comic western in, say, the vein of Shanghai Noon, the movie might have been an inoffensive time waster (and yes, this might be the first time in the history of film criticism that it's been suggested a movie aspire to the creative heights of Shanghai Noon). Coraci seems capable of making such a film. But between the awful material and the broad performances, it's a Happy Madison movie through and through. The silver lining is that it's not the worst Happy Madison movie to debut on a streaming service this year, because Joe Dirt 2: Beautiful Loser is still a thing.
Posted by Patrick Bromley at 12:00 PM