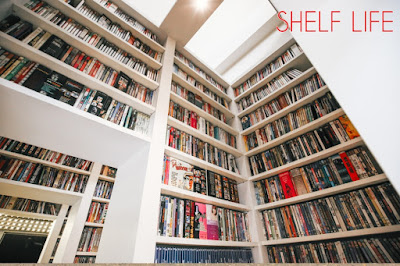 ‘E’ is for... ‘Ever wonder how we’re going to watch all these movies?’

Patrick: Bue! After some time away, we’re finally getting back to “Shelf Life” and catching up with our ‘E’ picks. I love the letter ‘E’ because it’s the first letter in your name. It’s also the first letter of Eureka!, which was my choice this time around. It’s directed by the great Nicolas Roeg (RIP) and stars Gene Hackman, Theresa Russell, Rutger Hauer, and an amazing cast of supporting actors that includes Mickey Rourke, Joe Spinell, Joe Pesci, and Ed Lauter.

This was a movie I had never heard of until it came up on a recent(ish) episode of Pure Cinema. After learning there was a Nicolas Roeg movie with Gene Hackman that we’d never seen, I ordered the Blu-ray from Twilight Time, which is how we watched it. It’s an odd movie. It starts like There Will Be Blood and ends as a courtroom drama...sort of. What are your first impressions of Eureka!? 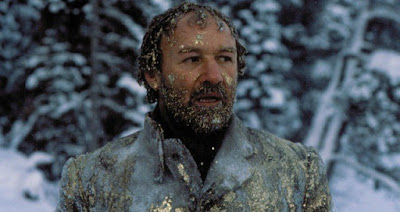 Erika: This movie was fascinating to me. It’s definitely weird at times, so I understand why it may not have played well to mainstream audiences in 1983. More than even the narrative changes that you refer to above are many, many sort-of “hallucinatory” shots and changes in pacing that seem to be part of Roeg’s style -- I’m thinking of the grandfather clock in an early scene with Russell, for example. Anyway, this movie grabbed me and didn’t let go. I can’t really explain it, but I was totally invested in where this “Gold Rush dreams come true” story was going, and I think a big reason why was because of some of the “odd” (not necessarily to us, but probably to many casual moviegoers) or unique directing/editing choices. And because of Gene Hackman. Has Gene Hackman EVER been disappointing in a movie? I’d say his presence can make even a sloppy film or boring story come to life. What did you think of Hackman here?

Patrick: Gene Hackman is always the best. It’s only been as an adult that I’ve realized he’s one of my favorite actors. As a kid, he was one of those guys it seemed like only dads liked, and most of my favorite actors were the ones associated with the movies I watched all the time -- comedies and action movies, mostly. Now, though, the presence of Gene Hackman is a guarantee that I’ll watch a movie even if nothing else about it interests me. Here he’s playing a variation on the Gene Hackman prick character he does so well, but there’s also some really interesting -- and probably very dark -- stuff with his relationship to Theresa Russell. For reasons I won’t get into, he’s not in as much of the movie as I was originally expecting, but he’s a towering presence in every scene in which he appears.

Erika: Do you agree that Roeg’s style might have been off-putting to some moviegoers? Did you catch the elements of voodoo or the occult being teased (and then returned to later) in the opening sequences? At first they caught me off-guard and I felt like I missed a scene, but later they added a supernatural element to the story that mesmerized me.

Patrick: I think we commented to one another more than once that this could not have been a very commercial movie in 1983. I’m not sure it would have been a very commercial movie in 1973, either, but it certainly feels more at home with that period in Hollywood history than it does with Return of the Jedi and Superman III (incidentally the only Superman movie in which Gene Hackman does not appear). The movie is told in a fragmented, enigmatic style that at times I really responded to -- the quick cuts back to Hackman’s days as a prospector, for example, as a visual depiction of how memories shape us -- and at times pushed me out of the movie. The supernatural/voodoo stuff threatened to lose me, but at least it’s more rooted in where the characters are in the story than it is about some unseen force guiding these events.

More than once you brought up Citizen Kane. Those comparisons don’t seem accidental. 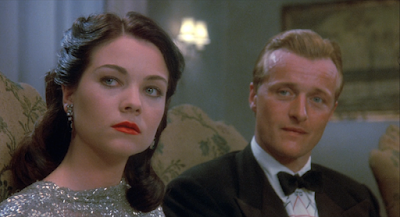 Erika: Sometimes there’s a hole in one’s heart that nothing can fill -- not all the gold or riches in the world. Sometimes lottery winners lose more than just their winnings. “Once I had it all; now I have everything…” is a timeless statement delivered by Hackman’s Jack McCann. I couldn’t stop thinking about how those words apply to SO MUCH of modern life, even if a person doesn’t become extremely wealthy. Sometimes people can’t see the forest for the trees. Or the grass is always greener… till it’s not… and all these cliches that are so often true (I think I said the same thing on our recent podcast when we were talking about Hustlers). Like Charles Foster Kane, McCann has filled his life with anything he’s ever wanted - anything money could buy. But all of the expensive material items or “status purchases” (gosh if this doesn’t remind me of our current timeline and how quick and easy it is for people to click a button and buy ANYTHING they want with a credit card…). There was also a snow globe shot and a few editing choices that seemed like an homage to Citizen Kane, including a transition with a loud bird which immediately reminded me of that wild, screeching bird transition right before Susan Alexander leaves Kane.

No spoilers. But there’s use of a flame-thrower in Eureka! that shocked me and still haunts me! Wait -- was this a horror movie? AND… OH MY GOODNESS. Did you know this was based on a true story? Just like Citizen Kane reflected details from the life of William Randolph Hearst, Eureka! was inspired by the life of Sir Harry Oakes. Now that I’ve found this out, I’m trying to find out as much information about Oakes as I can, so excuse me as I stop writing this column and head to the library. Thanks. Ok, maybe I will just use Google right now but seriously… I am down a history rabbit hole right now! See you later!

Patrick: Well, this was fun but I can’t compete with LEARNING. What did you choose for your E movie?

Erika: Our “E” sections (DVD, Blu-ray, Criterion, Arrow, etc.) were a bit smaller than some other letters, which was hugely comforting to me. I think it’s well-documented that I am an “includer” both in real life with humans and in movie life: I hate leaving anyone or anything out. I think I first picked six discs and got it down finally to Paul Bartel’s 1982 cult classic Eating Raoul. Ninety minutes have never flown by as quickly -- I was entertained from the start and didn’t want it to end. I loved the satire, I loved the chemistry between Bartel and Mary Waronov as “The Blands,” I loved the giddy, puppy-love energy of Robert Beltran’s performance, I loved the sex parties (where are the deleted scenes?), and I loved what each small player brought to the screen (Ed Begley Jr., Susan Saiger, Buck Henry, Edie McClurg, THE REAL DON STEELE). You had seen this before. What are your feelings after this recent viewing? 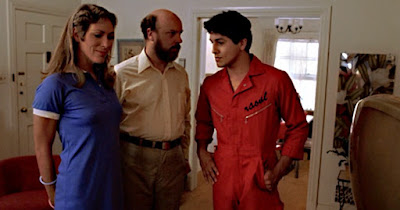 Patrick: I’m a big Paul Bartel fan, so any rewatch of one of his movies is a welcome one. He and Mary Waronov are so funny together, and I love the way the movie satirizes the Reagan ‘80s, from class divisions and greed to sex and social conservativism. Of course I’m also going to like any movie that lands in a place similar to The Texas Chain Saw Massacre, wherein cannibalism becomes an economic necessity -- the result of one class being squeezed and squeezed until they have no other options.

You’re right that the movie flies by. That’s one of the things I like about Paul Bartel’s movies: they’re always peppy and always completely entertaining. This one becomes more episodic as it goes along, charting each of Mary’s encounters, each with its own fetish or hook. That they all end with the sound of someone being hit in the head with a frying pan probably should have gotten old to me at some point, but it never does. I love that Bartel commits to making the same joke over and over. Seeing him work with so many of his “company” actors here makes me happy, too; the movie doubles as its own thing and as a celebration of him as a filmmaker.

Erika: By the time the frying pan hits come within seconds of the knock, we were laughing very much out loud. Those beats are so fun in movies like this. Bartel understands timing and joke development for sure. I didn’t grow up with Bartel’s films though I was always aware of them. They were some of the ‘forbidden fruit’ films: specific R-rated movies that we weren’t allowed to watch as kids even though we knew they are out there and that something exciting was happening in them - hence the adults in our lives talking about them and watching them… without us. I’m loving these discoveries and am excited to keep going. 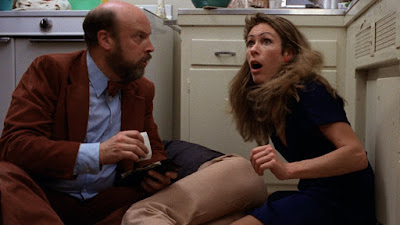 Patrick: I didn’t grow up on Bartel’s movies either, though, like you, the titles were always familiar to me (my parents for sure weren’t watching them). I didn’t really discover him until Death Race 2000 maybe 15 years ago, and I fell so in love with that movie that I wanted to seek the rest of his work out. You and I recently watched Scenes from the Class Struggle in Beverly Hills, and it shares a lot of the same DNA as Eating Raoul -- not to mention a lot of the same cast. The two movies would make a pretty great double feature.

Erika: I may just have my own private Bartel Fest. Well, I guess you are invited. We do live together.

Patrick: Thank you, my love.
Posted by Patrick Bromley at 5:00 AM