“Did you ever see The Texas Chain Saw Massacre?
Horrible, wasn't it?
You know people ask me, ‘Is it really true
You know, when you live in Texas
Is that really true what they do around there to people?’

I say, ‘Hey, now every time I drive through the crossroads
I get scared there's a bloke running around
With a fucking chain saw
Oh, no, he's gonna cut off me…
Oh no, no! Don't saw off me leg! Don't saw off me arm!’

When I go to the movies, you know
I'd like to see something more romantic
You know, like An Officer And A Gentleman
Or something, something you can take the wife to…
You know what I mean?”

--Mick Jagger
“Too Much Blood”

This week I notice with chagrin that, with the exception of one award-winning podcast from Patrick and Mike, The Texas Chain Saw Massacre is a subject we have all practically ignored here at F This Movie!. Were we all just too busy? Were we all somehow not aware of its place in horror history? Were we all alike in thinking that writing about this monolithic work was just too daunting? Were we all aware that is the signature work in the filmography of Tobe Hooper, our leader Patrick Bromley’s favorite filmmaker? Were we all… chicken? 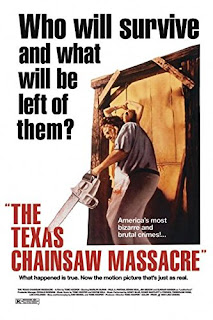 The Plot In Brief: Sally (Marilyn Burns), her brother Franklin (Paul Partain), and three interchangeable friends pile into a van and take a road trip to a cemetery. There have been reports of grave robbing, and the kids want to check on Sally and Franklin’s grandfather’s grave. You know, as one does. Along the way, they pick up an unusual hitchhiker, whose behavior reminds both the kids in the van and the movie audience why one should NEVER pick up hitchhikers. After forcing the hitchhiker out of the van, the kids wind up at a seemingly abandoned farmhouse, which turns out to contain the stuff of nightmares.

Like Franz Kafka’s The Metamorphosis or the Trump Presidency, The Texas Chain Saw Massacre starts in a situation that is bad and continues as events get progressively and manifestly and inexorably worse. There is no standard dramatic arc. There is no false moral uplift, there is no comic relief, and there is no conventional happy ending. We follow Alice down the rabbit hole, but it doesn’t end in Wonderland, it ends in hell. The film is unrelenting in a way that is both uncomfortable and deeply troubling. To paraphrase John Landis, “With Alfred Hitchcock, we know we are in the hands of a master. With films like [Texas Chain Saw] we feel we are in the hands of a maniac.” 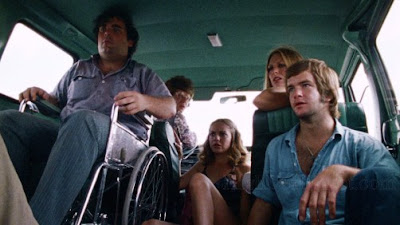 The Texas Chain Saw Massacre is one of the best horror films ever made. It is well-directed and well-acted and (once the 2005 2K scan of the original 16mm materials removed decades of schmutz and grime) very well-shot. Like so many drive-in films of the 1960s and ’70s, I grew up thinking that the fact they were all kind of shitty looking was based on some sort of crappy industry standard or a secret and bizarre director mise-en-scene. Thank goodness that further decades of careful DVD and Blu-ray transfers are performing restoration miracles on all sorts of films.

One of my favorite shots in the film is a seeming throwaway, the shot of the teaming spider web on the porch. We can all talk six ways to Sunday about that shot’s power to foreshadow what lies ahead or its symbolic value; I just like the way it looks. Like George Romero’s extreme low-angle view of the trees early in the cemetery sequence in Night of the Living Dead (or indeed, the strange mirrored music box we spy Barbara through in the same film) I delight when directors just take a second to show us something strange and inexplicable and beautiful. 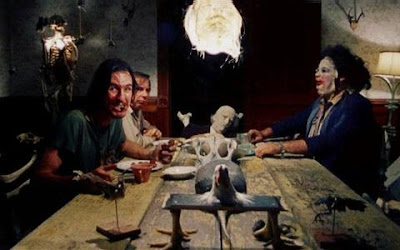 I first saw The Texas Chain Saw Massacre at a drive-in when I was in high school, and the film’s reputation preceded it. What I had heard and read about the film beforehand led me to believe that I saw a cut version of the film that night, but in reality I was experiencing a phenomenon that many people would write about in regard to The Texas Chain Saw Massacre: Tobe Hooper’s brilliance here is suggesting all sorts of gore and horror THAT DOESN’T ACTUALLY APPEAR ON THE SCREEN. Hooper marches us right up to the line of what we can stand, and then backs off. The film isn’t really any bloodier than the average 1980s action movie, but it is extremely suggestive. That is where we find the art of this film. Alfred Hitchcock would be proud.

Compounding the effect of this suggestive content are themes that are sure to make the average American cringe. If horror film themes are represented as poker hands, well then, my friend, The Texas Chain Saw Massacre is a full house, dealing with themes of family, cruelty, responsibility and guilt, and economic deprivation. There is a desperate undercurrent of poverty to the film that both feeds (sorry) the narrative as a whole and lends a genuine sadness to every frame.

Speaking of which, I here include a picture of the drive-in where I first saw The Texas Chainsaw Massacre—the famed 53 Drive-In in Palatine, Illinois, now defunct. It looks like it could be an unused set from the picture. 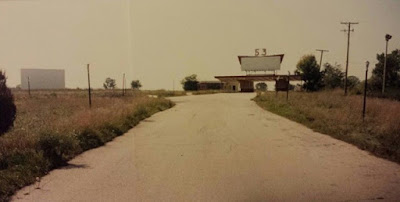 From what I have read, the conditions surrounding the making of The Texas Chain Saw Massacre mirrored the film. Like both Apocalypse Now and The Evil Dead, the circumstances and adversities the filmmakers faced turned the production into an inconvenient metaphor for the content being filmed. Whether it’s a monsoon destroying the sets… or crew members gradually abandoning the project after too many 72-hour workdays… or a hot-as-hell farmhouse where an actress is tied to a chair, convinced to jump out a window, or hectored into crying and screaming for hours on end… after awhile, it begins to make no difference if you are terrorized by a family of hungry psychopaths or a family of hungry, low-budget filmmakers, it’s one and the same. (Just ask Shelly Duvall about The Shining shoot—that shit gets under your skin.) 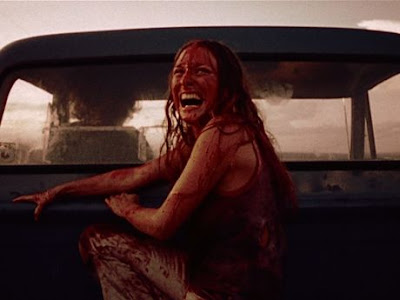 THRILLS: 110%
(To see Hooper and his merry band of young actors and filmmakers wrestle this film from the yawning chasm of mediocrity? The definition of thrilling.)

CHILLS: 110%
(The final shot of the film is one of the five most chilling in horror film history.)

SPILLS: 110%
(Stunts that seem real because they are real.)