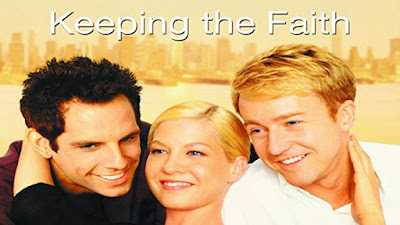 Welcome to 2K Replay, the home of the year 2000 in Film. This month I’m revisiting the movie I saw at a dollar theater on a “Is this a date?”: Keeping the Faith.

• Best Scene/Moment: I like the Yom Kippur service near the end of the movie where Ben Stiller underlines the theme of having faith in the goodness of other people and not prematurely deciding they’ll react to something negatively. See, you think “keeping the faith” is going to be about your own relationship to religion, but it’s not knowwhatImsayin.

• Best Food: For a movie set in New York City, there’s a surprising lack of food. I guess I’ll pick whatever unseen food Anne Bancroft makes Ben Stiller-Edward Norton-Jenna Elfman as Best Food, because Norton says he can’t believe Stiller stayed so thin with Bancroft cooking like that for him. Would it have killed them to show me some brisket? C’mon, movie. You know what I like. Show me brisket!

• Best Song: “Pitseleh” by Elliott Smith. It plays over a sad people montage.

• Best Merch Available on eBay Right Now: “Keeping the Faith Movie Wardrobe: Ben Stiller worn shirt COA & Tag” for $125.00. It’s an undershirt he wore in a shot lasting two seconds. At least you get a certificate of authenticity. Happy to pay for the pit stains. 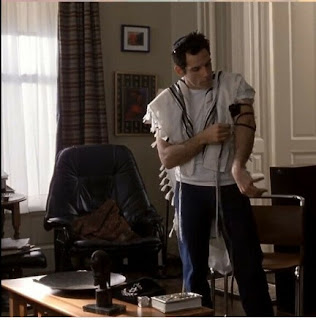 • Director Check: After a successful acting run (this was probably his peak), Edward Norton had enough goodwill to get his directorial debut off the ground at Touchstone Pictures with Keeping the Faith. It was made in tribute to his late mother, Robin Norton. The movie’s a lot less edgy than most of Norton’s acting work up to that point. The movie did ok ($60M earned on a $29M budget) and Norton went back to acting afterwards until he directed his long-gestating passion project Motherless Brooklyn, which was finally released last year. I like Norton as a director. I give him an A for effort and a B- for execution. His passion projects as a director have a lot of sentimentality, which I appreciate.

• Year 2000 Movies to Trailer Before It: High Fidelity, Meet the Parents, What Women Want

• How Did It Rent at Blockbuster? I don’t know, because it came out on video when I was at college and not working at Blockbuster. I came back for the following winter break and remember transferring a few to Previously Viewed Tapes. They were priced at $9.99, so a certain level of class.

• Mall Movie? Probably not. This feels like a movie people matinee at the classy theater before 5pm dinner.

• Only in 2000: There’s a shot of Stiller and Norton walking down the sidewalk in slow-motion with sunglasses on (they’re the “G-D Squad”) set to the song “Smooth” by Santana ft. Rob Thomas. There’s barely a hint of irony. You couldn’t do that today. 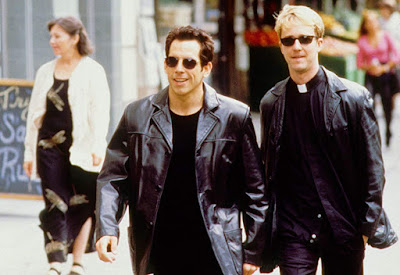 • Poster Score: 1 out of 5. Edward Norton wouldn’t even put it on his wall. It’s tapioca.

• Scene Stealer: I’m surprised I’m saying this, but Jenna Elfman really stands out in this one. She has a tough task of playing the woman everyone loves and she’s good at it. It helps that she has an easy chemistry with both Stiller and Norton.

• I Miss: Elliott Smith, Eli Wallach, Anne Bancroft, and Milos Forman. I especially liked Forman in this movie (“I was dreaming of my mother’s sausages”). One of my favorite things ever is when directors give supporting performances in other director’s films.

• I Don’t Miss: The “A-WHAAAAA????!!!” face that filmmakers give Jewish characters whenever something goes against the grain of tradition. E.G. “A-WHAAAA???!!! You brought a Gospel Choir to sing at temple!” or “A-WHAAAA????!!! You’re at the movies with a woman who isn’t Jewish?” I’m just saying, give us a little bit more credit than that. We can handle audibles. 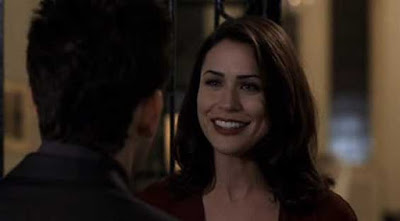 • What I Thought in 2000: I wasn’t expecting anything out of this movie and then was really charmed by it. I bought it on DVD back in the day.

• What I Think in 2020: It’s the type of movie I wish were still being made and playing in theaters.
Posted by Patrick Bromley at 5:00 AM