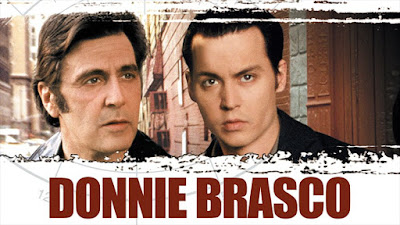 The review duo who always carry their money in a roll.

Rob: Our All Pacino series returns for its fourth year with 1997’s Donnie Brasco. Based on the memoir of the same name and directed by Mike Newell (Four Weddings and a Funeral), the thriller stars Johnny Depp as FBI Special Agent Joseph Pistone, who infiltrates a Brooklyn mob outfit — posing as the titular “Donnie Brasco,” the name we’ll be calling him in order to avoid confusion — in hopes of taking down its core leadership. Although the years-long undercover process has alienated Donnie from his wife (Anne Heche as Maggie) and daughters, it has allowed him to forge a bond with mid-level captain Lefty Ruggiero (Pacino), whose own career struggles are exacerbated by the sharp young Donnie’s arrival. As Donnie endears himself more and more to underboss Sonny Black (Michael Madsen), he realizes he’s becoming more crook than cop.

Adam, why don’t you start us off on Donnie Brasco?

Adam: You mean the great Donnie Brasco? I’ve always been a fan, but each new time I watch this movie I'm convinced it’s a mob classic and one of the best films of 1997. I want to start by praising the Michael Madsen performance. I think this is his career-best work. It plays into everything he brings to the table as an actor: he has a charisma that draws your attention, it’s a period film so his greaser/disco look still kinda fits, and he’s believable as a guy who could take charge of this type of crew where his underlings are mostly either jokesters, muscle, dim, or a combination of all the above. It’s the type of performance that makes me happy for an actor I like because he’s perfectly cast. It’s too bad Madsen wasn’t around in the ‘50s and ‘60s. I think he would have had a huge career back then (not that his actual career hasn’t been charmed itself). He just seems sometimes like a man lost in time. Who gives your favorite performance in Donnie Brasco? Do you think it should have won an Oscar for Best Sound Effects Editing? The crunching of leather jackets and car seats are their own characters in the film. 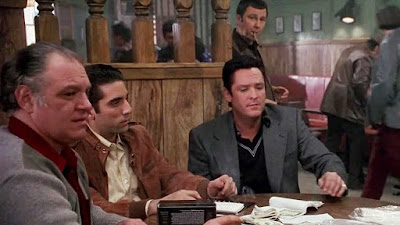 Rob: The leather jackets are absolutely incredible, as is almost everything the characters wear throughout the movie. I’m glad you pointed out Michael Madsen’s commitment to the bit, here, because this is absolutely the kind of movie he was built for. Another favorite performance of mine might actually be Anne Heche, who plays the Nagging Wife character with a little more suppressed rage than is typically found in those kinds of performances. She has a real (and justifiable) vitriol, especially in the couples therapy scene, but it’s cut with exasperated devotion. She’s tried so hard to make this work — she wants it to work — but she’s starting to feel that hopelessness that comes with the territory.

Adam: I miss Anne Heche. She’s great in Donnie Brasco in the type of part where it’s difficult to bring new layers. I looked forward to each time she came back because she elevates her scenes with Johnny Depp. He has to be all “I put food on the table…” and she gets to run the scene for a bit. It’s good work that might get overshadowed by the lead performances so I’m glad you called it out.

Rob: So, this was my first time viewing of Donnie Brasco since I watched my grandfather’s archive copy way back when (He would tape movies from HBO or Blockbuster rentals, store multiple movies on a tape, and then give each one a number and list titles in an old address book), and I’m at an interesting crossroads with it. It’s incredibly watchable, and there’s a really endearing thread of campiness throughout. But I have to be honest when I say that this is clearly a mob movie made by...well...not an Italian. It may be because we just went through Irishman season (and possibly because I finished reading Charles Brandt’s I Heard You Paint Houses last night), but I was bothered by the obtuse framing of the cultural and procedural elements. There’s no romance to it, no music. Some of the mob lingo stuff is great (the “fugazi/ fuggetaboutit” conversations), but there are times when capital-M Mobsters are calling each other “Boss” and talking about gun calibers and how guys “are going to get blown away” in ways that real wiseguys never would. Does reality matter? No, of course not. But something tells me that in 1997, Newell and Co. were so invested in pummeling us with authentic-feeling aesthetics that they lost sight of the logic and let it occasionally become a cartoon.

Nor does the character pathos entirely stand up to muster. Donnie’s relationship with Lefty doesn’t have a ton of interiority to it, and it would have been nice to see a bit more of what made their bond so special outside of Lefty’s “lost son” angle. There are times when Lefty is posturing so hard to impress Donnie, and we could have used a bit more depth in that respect (The whole “money in the greeting cards going back and forth” thing? More stuff like that). Pacino takes a major back seat in the second half of the film, and Donnie’s inner conflict is mostly shown in external things, like fights with his wife. Honestly, these are quibbles! But Donnie Brasco is one of those movies that feels right in so many ways that you’re a little disappointed when it doesn’t land every note. It’s just a bit inelegant. A bit flat. I would love to see a Donnie Brasco directed by Paul Schrader, Brian De Palma, or, of course, Martin Scorsese. 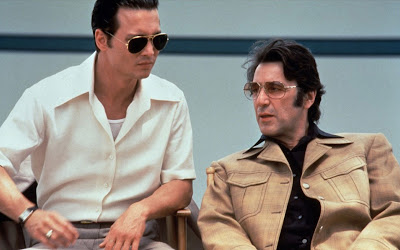 Where would you put this Al performance in the pantheon of Al performances? He’s more somber and understated than he usually was at this mid-career point. He feels a little boxed in after the first forty-five minutes or so and gets progressively detached (which he plays wonderfully) from there. What do you think?

Adam: Whoa! This might be the biggest disagreement we’ve had during the All Pacino series. And that’s kind of neat! I thought the Depp and especially the Pacino characters had interior life to them. Donnie Brasco was a rising star in Sonny Black’s ranks and appreciated in a way that he wasn’t at home by his wife or by his handlers in the F.B.I. At heart, Joe Pistone is a good man, but his allegiances are all out of whack and I thought that was done convincingly. He wasn’t drawn in by the lifestyle so much as he appreciated recognition for being smart, resourceful, and ambitious. I think he genuinely loves Lefty, too, and not in a father figure way. Pacino’s character thinks of Donnie Brasco as a second-chance (improved) son, but I always got the sense that Donnie can see Lefty for what he is and pities him. If insurance was involved, Donnie would claim Lefty as a Dependent. Lefty’s still around because he’s loyal and willing to do the dirty work. That’s it. He has a thin margin of error otherwise. The scene where he buys a greeting card for the Miami mob boss and puts a $100 bill inside is everything you need to know about Lefty. He’s not dumb but he also has very little awareness for the interpersonal world of the mob. I think this is one of Al’s best performances. As you alluded to, it’s subtle in comparison to much of his ‘90s work. I completely believe Lefty has lived a full life when we meet him and that’s a credit to how well the actor gets under the hood of the character. I think he recedes from the spotlight later in the film because we’re starting to see Lefty for what he is and that’s relatively small in this circle. In the first 45 minutes, as Donnie is taking everything in, Lefty feels like a more important figure.

Rob: I don’t want to mischaracterize my position. I like the movie, and I like their moments together, I just wish I saw a bit more of how the stakes of that relationship change. More depth to the second half.

Adam: I wanted to call out the great score by Patrick Doyle. Mafia movies have a strong track record for hitting sentimental beats and I think (besides the performances) Doyle’s score does a lot of heavy lifting here. I love its melancholy tone. One scene where I noticed it the most is when the King’s Court lounge in Miami gets busted up. Madsen’s reaction and the score make the scene into tragedy. I like when a filmmaker can manipulate my emotions like that. I shouldn’t care that Sonny Black’s dream is being destroyed but I do and most of it is due to how the scene is put together technically. I also can’t say enough good things about Lefty’s final moments. It’s a heartbreaking sequence that I’ve never seen before in a mob movie. 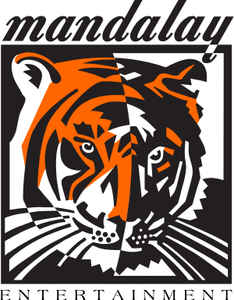 Rob: There are a ton of these I haven’t seen, and I don’t remember much about the ones I have, but let’s wing it!

List your favorite Mandalay Pictures productions in the comments and join us next week as we break down the Best Original Song Oscar nominees! Until next time…