Review: COLOR OUT OF SPACE 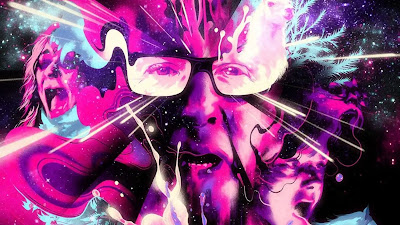 My favorite movie of the year so far.

Color Out of Space, director Richard Stanley's first narrative feature in almost 25 years, is the best Lovecraft adaptation since From Beyond in 1986. It's a neon-soaked nightmare, a headtrip made all the more hellish because of how much humanity Stanley infuses into the proceedings before Shit Goes Bad. We meet a family we like and care about deeply, then helplessly bear witness as some unknown, unspeakable terror tears them apart -- or, in some cases, fuses them together. 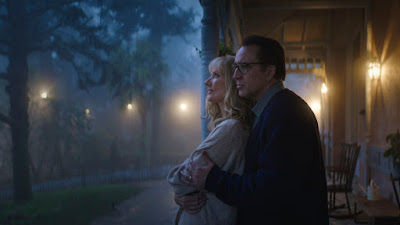 Nicolas Cage plays Nathan Gardner, a father who has recently relocated his family of five out to a secluded house in the woods where he raises Alpacas. His wife Theresa (Joely Richardson) continues to work remotely and fights a cancer diagnosis; his daughter Lavinia (Madeline Arther) has taken up witchcraft. One night, a meteor hits the property and infects the family's water supply, creating gorgeous pink flowers everywhere but having much, much worse side effects on everything else.

As a lifelong Nicolas Cage fan (who has also recently begun working my way through his entire DTV filmography, an exercise I've found enjoyable much more often than not), we are currently living in the best possible timeline to be a fan of the actor. Between this and Mandy, Cage is really giving himself over to outrageous and extreme visions of horror. It's clear that he trusts Stanley the same way he trusted Panos Cosmatos, and the result is a performance that is fully dialed in: he's quirky and funny and sweet and believably human in the early going, becoming more unhinged and aggressive once the meteor's effects have taken hold. In short, yes, he goes full Cage, but he completely earns it here. The madness that overtakes him is heartbreaking because we like him so much. 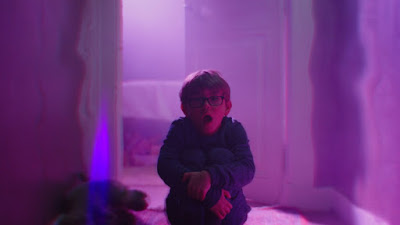 It's not just the Cage character, though. Color Out of Space is kind of a heartbreaking movie, one about the dissolution of the family told as Lovecraftian nightmare. Sometimes it's the little things that frustrate and cause tension, like a bad WiFi signal. Sometimes it's big life decisions that may or may not prove to be a mistake, like moving the family out to seclusion and buying a bunch of alpacas. It can be disease that threatens to take loved ones away, or the rebellious phase of teenage years. These seeds are sown before the meteor even hits, making the problems of the Gardner family very real and very relatable. The arrival of the Color out of Space creates and then ramps up even the tiniest bit of aggression and animosity among them, twisting and mutating their loving family into something unrecognizable the way those things like Sickness and Time only can. Great horror films like The Shining or Cronenberg's The Fly also double as tragedies. Count this movie among them. 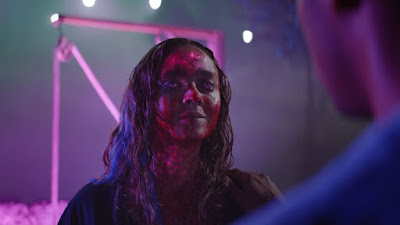 Reportedly, Richard Stanley already has a deal to make two more Lovecraft adaptations with producing partner SpectreVision (the genre company run by Elijah Wood, Daniel Noah, and Josh C. Waller). On the basis of evidence provided by Color Out of Space, that is the best possible news. This is a bold, confident film, one that's weird but never cold and disturbing without the nihilism of, say, Stanley's own Hardware. It's a horror film that's not afraid to go to really big places. It presents us with a true, exciting vision. Richard Stanley is back, and he's brought the best Lovecraft adaptation in 30 years with him.
Posted by Patrick Bromley at 5:00 AM