This piece of my parochial school past has finally received a decent video release.
Jesus, that only took 46 years.

Yes, that is Bradly Cooper sitting next to Amy Poehler at the piano!

The presentation of the number is true in spirit and costuming to its Seventies/Hippie/Broadway/Guitar Mass source, and the campers in the audience are shown really enjoying it. They clap and sing along joyously, until it’s over. Then they boo the performers off the stage.

This scene encapsulated my complicated, love-hate feelings about Godspell… but this new release helped me sort things out. 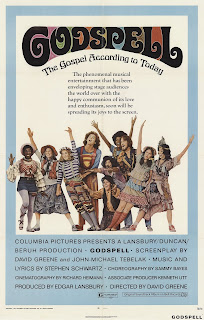 Attending a screening of Godspell at a real movie theater was my sixth-grade field trip in 1973. I attended Our Lady of the Wayside Catholic School, where field trips were about as common as Jewish kids. The first record album I ever purchased with my own money was the Godspell Original Motion Picture Soundtrack. (“Fascinating” bonus fact: the first 45 rpm vinyl single I ever bought was Elton John’s “Someone Saved my Life Tonight.” Discuss.) I thought the film was very entertaining—certainly more entertaining than the literally thousands of Catholic masses I had attended up to that point. My family went to mass every Sunday morning, and from first grade on, we attended mass as a class (#classmass) an average of twice a week.

In eighth grade, an ambitious and talented classmate of mine, Joe, persuaded the school to let him direct and star in a production of Godspell as a fund-raiser. It was presented in the school’s gymnasium. Because our little school did not have the musical talent to form a pit band, Joe just played the soundtrack over the school’s PA system and had his cast sing loudly over the vocals on the record. I remember the whole thing as very amateurish (because it was) yet I sat in that audience and wished that I had been asked to audition. When I search my memory bank to answer the question of why I was not asked to audition, the only answers I can come up with was that 1) Joe and I had hated each other since third grade, and 2) in junior high, I was a dick.

Maybe Joe could have forgiven me? You know, LIKE JESUS WOULD HAVE? 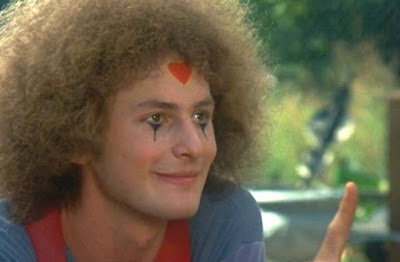 The Plot in Brief: John the Baptist (David Haskell) appears to a group of ordinary New Yorkers, exhorting them through song to “Prepare Ye, the Way of the Lord.” He leads them to Bethesda Fountain in Central Park and baptizes them. Jesus (Victor Garber) shows up in clown makeup and a Superman shirt and gets baptized as well. Jesus then leads his new followers through an eerily empty New York, stopping at a bunch of landmarks (Grant’s Tomb, the Hudson River, Times Square, Lincoln Center, the World Trade Center) where they act out parables and sing songs. After an hour of Bible-inspired tomfoolery, things do not wind up going well for Jesus.

SHOCK AND AWWWWWW: “All for the Best,” one of the best songs in the movie, is performed atop the almost completed twin towers of the World Trade Center. What was then a triumph of fun and imagination… now becomes a sobering moment of sadness and regret—kind of like my entire Catholic upbringing.

The Jesuits are fond of saying, “Give us a child until he's seven, and we'll show you the man.” So too is it true with Godspell. Though I obviously could use the space in my brain for something more important, I still have the entire show memorized. The. Entire. Show. This was proven the other day when the subject of that song, “All for the Best,” came up in the car, and my wife commented that she had learned it for a choir class in fourth grade. We then sang the entire duet, word for word. I can’t account for why that song is lodged so firmly into our skulls except to say that, as little Catholic children, we imprinted onto Godspell like a couple of orphaned ducklings. 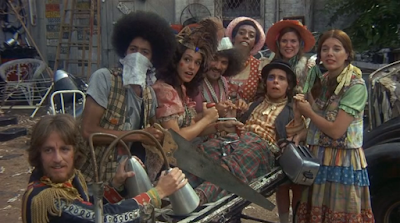 The new Sony MOD disc looks marvelous, reminding me of what a beautiful film this once was, before its reputation was marred by years of schmutzy reparatory screenings, a fuzzy and mis-framed VHS release, and an indifferent DVD transfer. Richard Heimann’s cinematography positively glows in this new transfer, the best I’ve seen since that field trip to the Mount Prospect Theater in 1973. (It’s almost as if New York City is a character in the film!) The new disc also boasts some impressive supplementary features: audio interviews with Stephen Schwartz (this was his first musical; he went on to write the songs in Wicked) and two of the cast members. Of particular note is Lee Gambin’s astounding feature-length audio commentary. Talking at breakneck speed—which I actually kind of like—Gambin essentially narrates for us a book-length history of the film and its players. It’s one of the best, most jam-packed commentaries I have ever heard and elevates this release to one of the best discs of the year.

Gambin’s commentary made me see that I had looked at the film all wrong for decades. I had classified the disciples in the film as mere hippies, and both the original Broadway show and film as products of flower-power and psychedelia. Gambin takes pains to explain that the stylization of the piece is actually playing upon the traditions of clowns and street theater, an interpretation that I found revelatory. It made me see the film in a whole new light. I let myself off the hook both for loving it so much as a pre-teen, and for being embarrassed by my love for it as a grown man. These new insights make the film much less of a “guilty” pleasure, and also made me wonder what other older films my youthful pre-conceived notions have kept me from fully embracing. 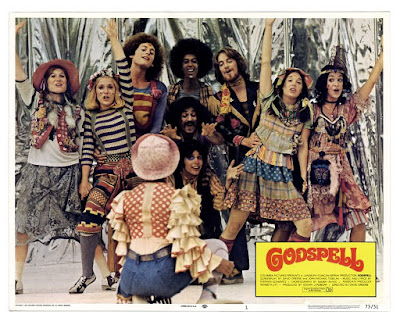 Proving that the best time to create supplementary material for an older film’s disc release is at least five years before you actually do it, the material on this new disc makes me wistful for what it could have contained if they’d gotten an earlier start. Of the ten original cast members, only six are still alive. Jeffrey Mylett died in 1986; Merrell Jackson died in 1991; David Haskell died in 2000; Lynne Thigpen died in 2003. I would have loved to hear from them, especially Mylett and Haskell, who originated their roles on Broadway. Where is Victor Garber? Arguably the most famous performer to come from the cast, I wish Garber had some presence on this disc. I found it funny that every time Garber is mentioned on the packaging of the old DVD or the new Blu-ray, we are reminded that he was in Titanic. But guess what?

Godspell is better than Titanic. It certainly has better songs.