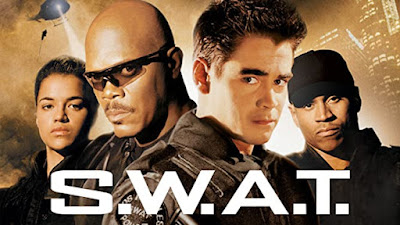 This installment of Heavy Action was suggested by our very own Adam Riske. Thanks, Adam!

I sat down with Erika in a quarter-full theater to see S.W.A.T. on its opening summer day in 2003. I had never watched the TV series on which the film was based. I had no real affinity for any of the cast members; studios were still trying to make Colin Farrell a thing (he has since become a thing, and justifiably so), Michelle Rodriguez seemed to be playing another Michelle Rodriguez part, and Samuel L. Jackson was in every fifth movie I saw back then. The trailers felt generic. Director Clark Johnson was all but an unknown quantity to me, having directed mostly TV that I hadn't seen (he wasn't yet Gus from The Wire). We went to see the first show that opening Friday because, like so many movies we saw back in those days, it was a new release.

It turned out to be exactly what I needed. 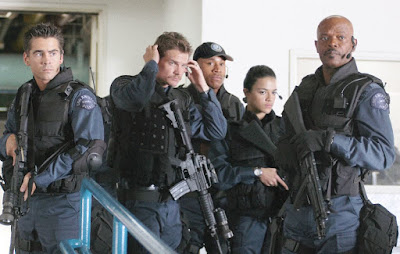 S.W.A.T. gets the job done. It's a real meat and potatoes action movie: little style, no characterization. One guy is the lead. One guy is the boss. One guy is L.L. Cool J. One guy has a mustache. One guy is a girl. The focus of the film is really on the team, on the job. I'm not suggesting that S.W.A.T. teaches us what it's really like to be on a S.W.A.T. team -- the detailed ins and outs of special unit police work. This isn't Michael Mann. This is Clark Johnson. But S.W.A.T. is very much about what it's about, not how it's about it. Except for some real 2003 trappings -- tramp stamps, tongue rings, spiky hair, Linkin Park -- it's about as straightforward as action movies of this period get. I mean that in a good way.

Colin Farrell is Jim Street, a member of S.W.A.T. who gets busted down with his partner (Jeremy Renner) after they disobey orders and put an end to a hostage situation but shoot a civilian in the process. Street is assigned to the weapons cage; his partner is fired outright. Six months later, Street begins to catch the eye of Hondo (Jackson), the sergeant who has returned to S.W.A.T. to head up a new team. Hondo puts his career on the line to get Street on the team with the likes of Deacon (L.L. Cool J), Sanchez (Michelle Rodriguez), Boxer (Brian Van Holt), and TJ (Josh Charles). When international fugitive Alex Montel (Olivier Martinez) comes to Los Angeles, he's brought to jail and offers $100 million to whoever can break him out. Plenty of criminals take him up on his offer -- including someone from Street's past. 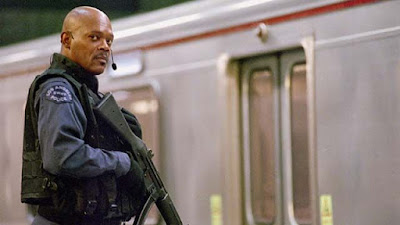 It takes the majority of its running time for the main conflict of S.W.A.T. to actually come into focus. The movie is in no hurry to get where it's going. It spends a lot of energy putting the team together and is then happy to follow tangents like training exercises or kids' birthday parties. Screenwriters David Ayer (because of course because L.A. and because police) and David McKenna come up with a great premise -- the team has to fight off a siege of criminals all looking to collect $100 million -- but the movie shows no real interest in exploring said premise. It's introduced and dealt with in the span of about a scene, which I still remember being disappointed by in 2003 because the trailer made it seem like that would be the major conflict of the movie. Instead, the movie has no real major conflict, just a bunch of smaller ones that continue to pop up. In an era (era) of otherwise high concept action movies, that's one of its charms.

The choice to structure the movie the way the filmmakers have can make it feel like an episode of a TV show. It has those kinds of stakes, that kind of interest in its big bad, who amounts to little more than a villain of the week. The criticism here is that in its translation to the big screen, S.W.A.T. fails to be appropriately "cinematic." As someone who sees a lot of action movies, I don't mind it. It's how S.W.A.T. distinguishes itself: by being about the job more than the personalities of its heroes or villains. It never invests itself too much in any one thing. Even the bad guy death is sort of casually tossed off in a way that feels less dramatic and more realistic -- it's just a thing that happens almost by accident and then it's over. That moment has made S.W.A.T. stick with me all these years when other action movies have faded away. I respond to how low-key the whole film is, especially in a genre known for so often being overblown. 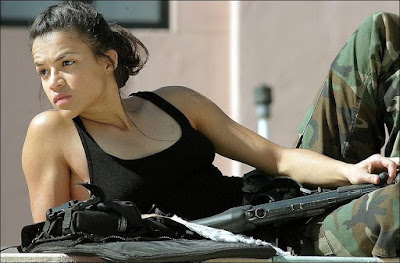 I'm pretty sure S.W.A.T.'s legacy is "one of those movies that tried to make Colin Farrell a movie star," but it's better than that. I'm not ready to cement its status as a #HeavyAction classic, but as the second feature on a double bill, you could do much worse. It's the kind of movie for which I could have easily seen a sequel, which might have had the potential of being even better now that the character dynamics and "the job" are established. They did make two DTV sequels with none of the returning cast; I have only seen the first of them and it's just ok. This one succeeds at doing what it wants to do and doing it well. It's not The Fugitive or Miami Vice, but it's not Wild Wild West either. It's a perfectly good Saturday afternoon action movie.