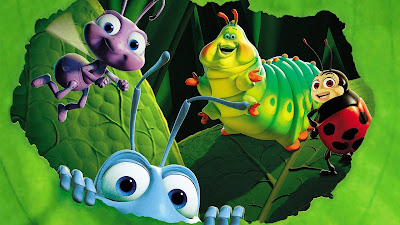 The review duo who hired circus performers to protect them from grasshoppers.

Adam: We continue our stroll through the Pixar library with 1998’s A Bug’s Life, directed by John Lasseter and featuring the voices of Dave Foley, Kevin Spacey, Julia Louis-Dreyfus, my boy Denis Leary, and Pixar regulars Bonnie Hunt and John Ratzenberger. The film is a clever take on the Seven Samurai story template, where an ant colony being extorted by a gang of grasshoppers gets protection from a troupe of outsider circus bugs who the ants don’t know are only actors. A Bug’s Life is one of the less-discussed Pixar movies (as far as I can tell) and this was my first time watching it since my first time watching it on DVD back in 1999. I remember it not leaving much of an impression back then on me (Antz vs. A Bug’s Life was a battle I had no stake in), but I enjoyed it a lot on this viewing. What changed in the years since is that I’ve seen Seven Samurai and its antecedents, so part of the enjoyment for me was seeing how A Bug’s Life adopted its tropes and subverted a few along the way. I don’t think the movie has memorable characters (by Pixar’s high standard) and it took me awhile to get over my aversion to bugs, but it’s a movie I don’t have a long history with like Toy Story so it felt new to me as I watched it.

How did the movie play for you? Were you a fan before?

Rob: I don’t remember seeing this in theaters, but I definitely remember getting really defensive of Antz once I entered my Woody Allen Phase (yikes), and I’m fairly positive that this was my first viewing of A Bug’s Life in quite some time. To be honest, it fell kind of flat. Fresh off the success of Toy Story, Pixar was clearly going for another high-concept, “What if _____ behaved like people?” premise (a well they’d return to in subsequent years), but this one largely lacks its predecessor’s warmth and emotional pathos. It’s a fine story — as you said, a Seven Samurai riff with nods to Aesop — but I found myself constantly distracted by the bug-related winks and gags in a way I’m not in Toy Story (or even Cars) and sort of bored by the plot mechanics, overall. This could just be a 2020 problem, and I’m trying to allow for the fact that Pixar is going through growing pains in ‘98, feeling out their evolution into their signature style, but A Bug’s Life traces with the Toy Story template to a much less successful result. 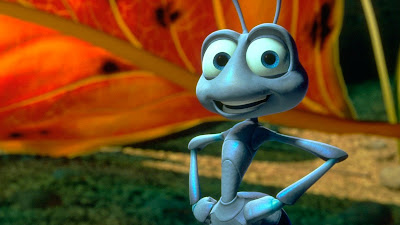 Now, is this all just because I have more sympathy for toys than I do for bugs? I honestly don’t think so. Toy Story gets a leg up because we have built-in emotional connections to toys like Woody and Buzz, for sure, but the movie also never skips an opportunity to better help us fit into their shoes or see things from their perspective. A Bug’s Life seems to focus more on having a larger number of thinner-drawn characters (variations of bug species, mostly) than it does on just a few from whom we see genuine arcs. I just didn’t feel as invested. It’s not bad, necessarily, but it makes the overall movie a hell of a lot more forgettable.

Am I crazy, here? Is there a particular character, theme, or set-piece you found really moving? I want to like this more than I do.

Adam: I don’t think you’re far off, although I’m more of a fan than you are of A Bug’s Life. The movie earns points because of its general good nature and the easy-button emotional goodwill you get from having characters start as strangers and become #Family by the end of the movie. I do think the movie is remembered less and less fondly though because it’s about bugs. Even when you have the best animators in the world working on a movie about bugs, it still looks like bugs, which I know some people love but most think are gross to look at for 98 minutes. I feel bad for picking on bugs, like if I was picking on humans. I guess that goes to show 1) I have heightened empathy right now and 2) The filmmakers did a good enough job making me sympathize with Flik. This is a movie I like but don’t want to use mental real estate for when I’m not watching the movie (does that make sense?). My other big takeaway from A Bug’s Life was being impressed by how (combining this and Toy Story) in control Pixar was so early out of the gate with their storytelling, characterization and animation style. I might not think it’s cute or especially engaging, but they always seem like they know what they’re doing. It’s never sloppy like most entertainment geared towards kids and family audiences.

Were you taken out of the movie every time Kevin Spacey showed up like I was? I watched Se7en earlier this year and it felt even creepier to me now, if that’s even possible. So did A Bug’s Life. Not to harp on an uncomfortable topic (which we probably should outright avoid so I’ll tread lightly), but this didn’t feel like a normal Pixar villain. This motherfucker felt like he meant it. Tell me about Antz. I avoided that movie because it’s about ants. Is it that much better than A Bug’s Life? 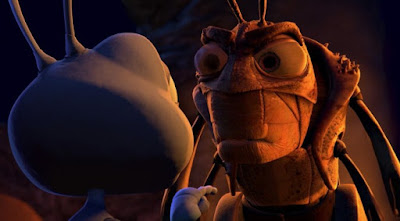 Rob: Knowing what a monster Kevin Spacey turned out to be actually helped me engage with Hopper as a more dynamic villain on this re-watch, for sure. Feels wrong, but it’s true.

It’s been a while since I’ve seen Antz, and I feel uncomfortable going to bat for a movie starring Woody Allen, but I remember it being a lot more interesting and idiosyncratic than A Bug’s Life. It’s more of a Romancing the Stone-type adventure farce with Allen and Sharon Stone playing the odd couple trying not to kill each other on their way to save the colony from Dennis Hopper. I remember liking Sly Stallone’s beefcake best friend character and Christopher Walken as Hopper’s second-in-command. Its sensibilities are a lot more adult and abrasive than A Bug’s Life, but it’s the one I’d put on if — setting aside the fact that they both have problematic casting issues — I had to choose.

Let’s close with a question to help structure this column going forward: Can you identify one aspect of a Pixar film that makes it unquestionably “Pixar”? Or, at least, can you name one thing you really enjoy about their style?

I’ll give mine first: The best Pixar movies embrace human emotional complexities without watering down tough issues or relying on absolutes like right/wrong or good/bad. Movies like Toy Story 3, Inside Out, or WALL-E tackle frightening concepts in kid-friendly (but not sanitized) ways. It’s especially noticeable when their films don’t do this, which makes me appreciate the ones that do even more.

Adam: Great question! Pixar films (at their best, which is more often than not) give me something that I didn’t know I wanted or expected. I tend to not seek out details about Pixar movies before seeing them because they’re so much more “how it’s about the thing” than “about the thing.” They also are masters at the eureka moment. For example, in the underrated Monsters University, it had an awesome thesis about how you can still be a part of something even if you’re not the best at something. Or as cliche as it might be now - from Ratatouille - anyone can cook. 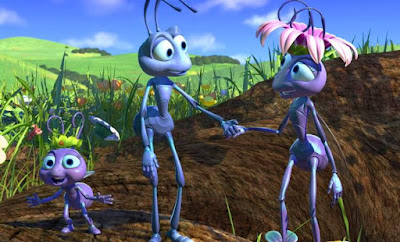 They’re also endearing to me because they do what I remember family entertainment did when I was a kid and that’s giving children something they might not understand right away but can catch up with as they get older. Or even in the case of something slight like Cars, how excited kids get about it on a primal level. It’s more than just them being marketed to; they seem to really connect with it and it’s cool to see the unironic joy it brings out of them.

Next week our All Pacino series returns with a review of The Humbling, which has maybe the worst poster I’ve ever seen. Until next time…