Here’s another one of those movies with a trailer that’s somewhat intriguing and then… poof! The film dies a quick death… like a horse being electrocuted.

Why didn’t this film get more attention and a wider release? I realize that the subject matter (the turn of the 20th-century battle between Thomas Edison and George Westinghouse over which system would deliver the electricity that Americans needed to take advantage of the new Edison light bulb) is a little esoteric, but with this cast it should have been an easier sell. The film stars Benedict Cumberbatch, Michael Shannon, Tom Holland, Katherine Waterston, Matthew Macfadyen, and Nicholas Hoult. 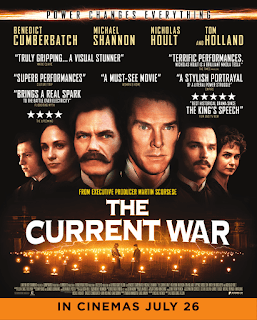 Unfortunately, this film was one of the many victims of Harvey Weinstein’s criminal behavior. After his company purchased The Current War at the Toronto International Film Festival in 2017, the Weinstein scandal broke and bankrupted the company, placing the film’s ownership in limbo. It was then bought by Lantern Entertainment; director Alfonso Gomez-Rejon expressed his desire to reshoot a few scenes and re-edit the film. Executive Producer Martin Scorsese raised the money for the reshoots. Five additional scenes were shot and ten minutes were trimmed from the final running time. The Current War finally received a wider release in October, 2019, to indifferent reviews and middling box office. The film wound up grossing just under 12 million dollars; the budget was reportedly 30 million dollars.

The Plot in Brief: Thomas Edison (Benedict Cumberbatch) wishes to electrify the East Coast, so that cities and towns can enjoy the benefits of his new incandescent light bulb. Edison believes the key to this proposition is the use of Direct Current (DC), which is expensive and doesn’t travel far, but is very safe. George Westinghouse buys up several patents and decides to compete with Edison for the light sockets of America. Westinghouse cobbles together a system using Alternating Current (AC), which is cheaper and travels farther, but is more dangerous. Both men realize that winning the contract to electrify the upcoming World’s Columbian Exposition in Chicago that summer would be a public relations coup that would cement the success of the victor. 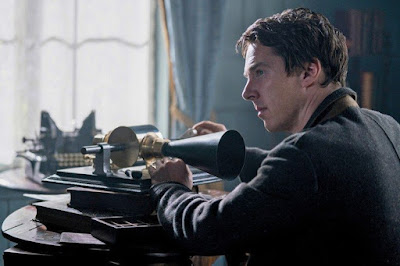 Perhaps my favorable reaction to the film says more about the difference between “choosing to go to a movie theater in the fall of 2019” and “watching something on the Pay Per View Machine during a Global Pandemic Quarantine.” I found the film fascinating, the performances engaging, and the production design incredible. Clearly, I was set up in advance to delight in the subject matter; Edison was an important part of the Early Film History unit in the class I taught for more than thirty years. Screenwriter Michael Mitnick and director Gomez-Rejon even tease this eventual invention: Edison is shown toying with flipbooks and later shows his son a prototype of the Kinetoscope. In the film’s conclusion, Edison proudly tells Westinghouse that what he is now working on will eclipse all of his early work and that he would be surprised if history would even remember his involvement with the electric light.

Critics were not kind to The Current War (one even compared it to an episode of Drunk History) but I learned so much. I must confess that I did not know very much about wunderkind Nicola Tesla (who briefly worked for Edison but later invented an electric motor that would work with Westinghouse’s Alternating Current). At the end of the film, dreamer/genius Tesla muses about an electrical system that doesn’t need wires. I knew very little about George Westinghouse. I did not know that industrialist J.P. Morgan had a financial interest in both competing electrical systems. I did not know that Edison consulted on the manufacture of the first practical electric chair. Fascinating! 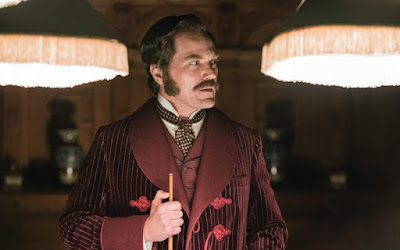 Another aspect of the film that I really loved was its theme of Art Vs. Commerce. It often seems that in the United States, whenever the forces of art and commerce meet, art pretty much takes it up the keister. The Current War posits its three principals as existing on a kind of capitalist spectrum: Thomas Edison is somewhere in the middle, almost the perfect marriage of innovation and business savvy, though he keeps getting robbed and exploited by unscrupulous businessmen. (I never realized that he was so protective of his motion picture patents because he got stung so badly in the electricity business. Do you know why movie-making settled in Hollywood? To be as far from Edison’s lawyers in New Jersey as was physically possible in the continental United States. Hollywood had the added advantage of being just steps from the Mexican border should rogue filmmakers need to take it on the lam.) George Westinghouse stands on one end of the spectrum (He buys and promotes but does not invent.) and poor old Nicola Tesla stands at the opposite end. Tesla is a bona-fide genius (At the end of his life he was working on the transmission of electricity without wires!) but he has no business sense at all. Of the three men, guess who died young and penniless? 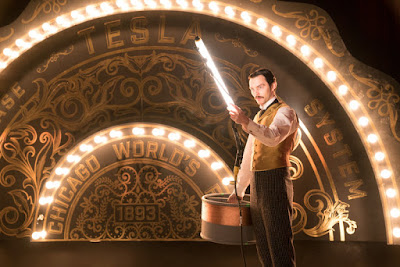 The performances are uniformly excellent. The costumes and production design are all done on a grand scale. The film is beautiful to look at; I love how dark most of it is, reinforcing the idea that this is what life was like before Edison’s bulb changed everything.

I am guessing that most of us these days have six dollars, two hours to spare, and working electricity. Check out The Current War; it’s illuminating.
Posted by Patrick Bromley at 5:00 AM