Celluloid Ramblings: CURSE OF THE WEREWOLF

Hammer Film’s Curse of the Werewolf has a muddled legacy. Critics and fans agree it has one of the best werewolves ever; they just wish there were more of it in the film. Oliver Reed gives a star-making performance as the doomed title character, Leon; it’s a shame that he only appears in the film’s final forty minutes. The production design, sets, costumes, cinematography, and makeup are all fantastic, but they are all in the service of the film’s first forty-five minutes, which are awfully slow going. By focusing so intently on the backstory of the werewolf’s parents, we have here the film equivalent of asking someone the time and being told how to manufacture a watch.

The Plot in Brief: A beggar (Richard Wordsworth) is imprisoned after crashing the wedding party of the evil Marques Siniestro (Anthony Dawson). He rots in a dungeon for fifteen years, when a mute serving girl (Yvonne Romain) is thrown into his cell after refusing Siniestro’s advances. The beggar rapes the serving girl, then dies. The next day the serving girl is released and sent back to Siniestro’s bedroom. She again refuses his advances, though this time she up the ante considerably, by using a wall sconce as a dagger and stabbing Siniestro to death. She escapes the castle.

Are all of you following this? Are any of you wondering where THE WEREWOLF comes in? 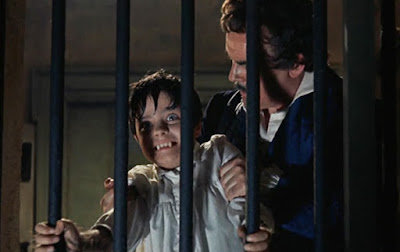 Like most Hammer Films, the performances in Curse of the Werewolf are all first rate. From the grotesque evil of Dawson’s Marques and Richard Wordsworth’s crazed beggar, to the quiet calm and kindness of Evans’ Don Corledo and Talfrey’s Teresa, and from the lively naivete of Catherine Feller’s romantic lead to Oliver Reed’s intense, physical brooding, there isn’t a bad performance in the film. Even smaller roles are filled out with lovely turns by Hammer regulars Martin Matthews, Michael Ripper, and George Woodbridge. The film’s prologue features a blink-and-you’ll-miss-it-cameo from Desmond Llewelyn, who was then only two years away from playing “Q” in the James Bond adventure From Russia With Love, a role he would play for the next 36 years! 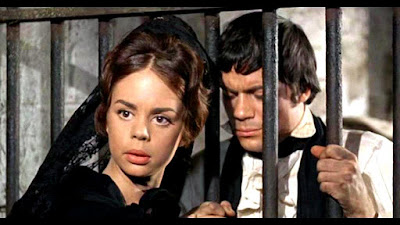 Scream Factory’s new restoration of this title is stunning, one of the best Technicolor transfers I have ever seen. I can still remember watching this after school on the fabled ABC Seven 3:30 Movie and suffering through a) an indifferent, smeary tele-cine conversion, 2) a 93-minute film that had been cut to fit in a 90 minute time slot WITH COMMERCIALS, and 3) further cuts for content as well as time. When the beggar lurches toward the girl in the prison cell, the station cut to a commercial. After the commercial, the girl is shown holding her new baby. That strange ellipses left little Johnny scratching his head...

The transfer is so beautiful and, well, scrumptious that it had me looking at the film in a whole new way. I started noticing how the set designs featured vertical bars of all sorts, not just prison bars in the multiple scenes in dungeons and jail cells, but in Leon’s childhood bedroom, his winery apartment, and elsewhere. I applauded the production team and especially designer Bernard Robinson for reinforcing the film’s themes about the imprisoning nature of fate with this clever visual motif.

One fascinating bonus feature on the new disc focuses on Benjamin Frankel’s unique score for The Curse of the Werewolf. I am the least musical person in the Northern Hemisphere, but I was impressed by musicologist David Huckvale’s ability to explain complicated material about music theory in ways that even I could understand. Seems Frankel’s score was one of the first to feature a compositional style known as “serialism,” pioneered by composer Arnold Schoenberg in the 1920s. A serial composition begins with the composer rearranging the notes on a chromatic scale into a 12-note row. No note is repeated until all 12 are played. The order of the notes remains unchanged, but they can be played in any octave, sometimes with big leaps between octaves. The intervals between notes can be reversed, the order of the note row can be reversed, and the reversed note row, with reversed intervals, can also be reversed. This lends a score that is the essence of both repetition and uncanny déjà vu: although our ears are being tricked into thinking new melodies and patterns are being created, the music is the same incessant progression played again and again. I thought this was a brilliant decision by composer Frankel, as this element of the film would also emphasize the repetitive nature of the main character’s plight and tragedy—the same violent things keep happening again and again and he is powerless to stop them. 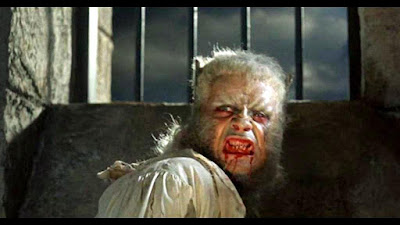 Scream Factory has given us a full boat of special features here, from two new audio commentaries, a forty-minute “Making Of” documentary, and featurettes on make-up wizard Roy Ashton, composer Benjamin Frankel, the film’s problems with the British censor board, and lycanthropy. This is surely one of the best classic disc releases of 2020.