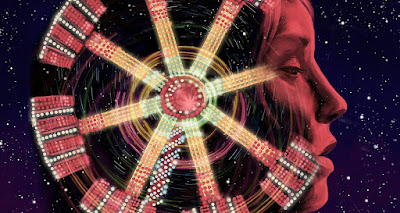 With movie theaters closed due to the ongoing Coronavirus pandemic, most film festivals haven’t quite figured out what to do, leaving cinephiles missing the theater experience and almost in a state of panic. CFF 2020 to the rescue.

Over the past few years, Chattanooga Film Festival has quickly become known as the genre film festival to attend, especially for fans of independent film. This past weekend, in a groundbreaking precedent, the festival introduced the first-ever totally virtual film festival, which included more than twenty-five features, forty short films, and a mind-numbing number of live events. This was my first year “attending” Chattanooga Film Festival. I spent four days intimately and completely immersed in genre films and Zoom live panels in my living room, and I have to say, even though I didn’t get much sleep due to the amount of content, I had a blast. Out of the nineteen feature films I watched, Jumbo is the only movie I watched twice. 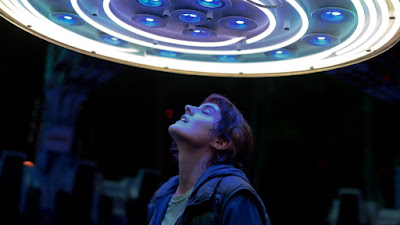 When I first read the synopsis for the French film Jumbo, which is based on a true story about a woman who falls in love with a Tilt-A-Whirl, I didn’t know what to expect. I saw someone online describe it as, “The Shape of Water, but with an amusement park ride.” I loved The Shape of Water, but expected Jumbo, which premiered at Sundance this year, to be weird. Surprisingly, it wasn’t.

Jumbo is the first feature film written and directed by Zoe Whittock, who is known for short films like This is Not an Umbrella (2011) and A demi-mot (2014). The film tells the story of a shy, young woman named Jeanne, played by Noémie Merlant, who works at an amusement park. In her free time, Jeanne builds small versions of the rides in the amusement park, complete with lights and moving parts; her room is filled with them. Jeanne lives with her mother, Margarette, played by Emmanuelle Bercot. Sexually open and free-spirited, Margarette is always trying to fix Jeanne up with men, but Jeanne is a bashful introvert who daydreams about the amusement park, so it never works out. When the park welcomes a new ride, a Tilt-A-Whirl, Jeanne is oddly drawn to it.

With the ride turned off, Jeanne climbs up on the Tilt-A-Whirl, and the lights and motions seem to be communicating with her. Soon, Jeanne is spending hours being gently twirled around on the ride with the lights brightly blinking. She can’t stop thinking about it and names it Jumbo. Jeanne and Jumbo communicate with each other using words, lights, sounds, and movements. The subtly exhilarating cinematography by Thomas Buelens, combined with the colors and lights on the Tilt-A-Whirl, give the film a dreamy, almost trancelike atmosphere at times, and soon it doesn’t seem so strange for a woman to fall in love with an amusement park ride. I don’t know the true story the film is based on, and it might sound crazy because of the subject matter, but Whittock’s writing makes the characters feel genuine and Merlant’s quirky but exquisite performance as Jeanne make Jumbo a heartwarming story. 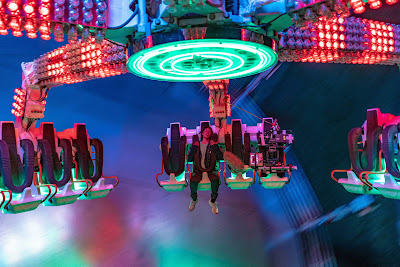 Margarette is involved with a new boyfriend, and when she discovers that Jeanne is romantically involved with a Tilt-A-Whirl, she vehemently disapproves. There is a sexual element to Jeanne’s relationship with Jumbo, but it is portrayed in a touching way that isn’t freakish or overtly graphic. Noémie Merlant is absolutely delightful as Jeanne and Emmanuelle Bercot is a riot as her outspoken mother Margarette. Enhanced with music, the electrifying, unexpected final sequence of Jumbo causes the film to end on a sweet note. It’s a fantastical story, but the visuals and performances in Jumbo left me in awe. This movie made me feel happy. Movies like Jumbo are the reason I embrace independent film.
Posted by Patrick Bromley at 12:00 PM