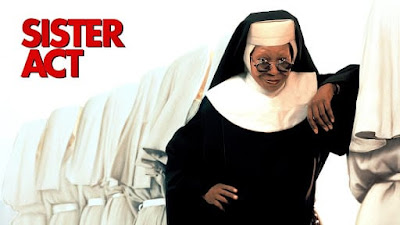 What if I were to tell you we were having nun of this movie?

Adam: Welcome back to Summer ‘92 Redux, our revisit of the Summer 1992 movie season. Sister Act stars Whoopi Goldberg (fresh off a Ghost Oscar bump) as Deloris Van Cartier, a Reno-based Motown tribute singer and mobster’s girlfriend who goes into witness protection at a convent after witnessing a murder. Despite a grittier, Midnight Run-style premise, Sister Act quickly goes the family-friendly route with the expected shenanigans and misunderstandings of Whoopi Goldberg imparting her influence on a group of nuns and the disapproval of the strict, traditional Reverend Mother (Maggie Smith) in charge. The film co-stars Harvey Keitel as the mobster, Bill Nunn as a detective, and Kathy Najimy as the awkward nun created solely as a vessel for trailer moments. The movie was directed by the late Emile Ardolino (Dirty Dancing) and was a sleeper/word-of-mouth hit, finishing the summer season as the third-highest grossing film.

Watching the movie today reminded me of more innocent times, when a movie as genial as Sister Act could clean up at the box office and on home video. Nowadays, this is the type of movie that would show up on Freeform. It’s also a time capsule of when Whoopi Goldberg was at the peak of her powers as a movie star. She’s good in the movie and not the problem. The issue on this rewatch (which had to be my first since the mid-90s) is how dopey the whole movie is handling the premise: the gangsters are declawed, the rise to worldwide fame with the convent’s singing is absurd, and the notion of nuns singing Motown somehow solving neighborhood blight is naive to the point of being pandering. Sister Act always feels like it’s playing under the intelligence of its audience and after a while I resisted it despite its good cheer.

This was your first viewing of the movie. What did you think and (despite it being a hit) was there a reason you didn’t watch Sister Act until now? 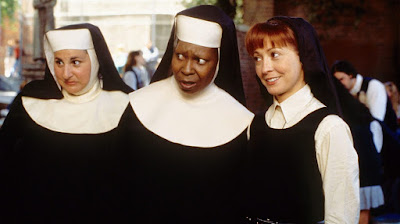 Patrick: I have to believe I’ve gone my whole life not seeing Sister Act because there’s really nothing in it that appealed to me. I like Whoopi Goldberg, but maybe not so much that I’ll see anything she does. Singing nuns didn’t seem that funny to me on its face. Maggie Smith is a good actor but rarely a draw for me. The trailers didn’t convince me to see it. Had I not had to watch it for this week’s column, it’s very possible this would be a movie that I just never got around to seeing.

Now that I’ve seen it, I can say that it’s exactly the movie I expected it to be. Nothing about it surprised me except how lame it all is, and I don’t even mean that to sound as negative as it does. I just mean that the first girl group number the nun choir does is kind of exciting and I get why it would draw attention, and then everything after that (like “My God”...ugh) is totally toothless and almost sleepy. I know people love this movie. I want them to love it and I’m happy they have found a movie they love. Like you said, Whoopi Goldberg is good and I understand why this was such a successful showcase for her after she won the Oscar. I can even understand why the movie was a big hit, because it’s a movie that appeals to a very wide audience that doesn’t always go to the movies. I’m just struggling to find much to say about the movie because it is aggressively not for me.

I’m glad you bring up Kathy Najimy as the human trailer machine. She’s indicative of what this entire screenplay seems to find funny, which is Nuns Doing Things. It’s funny when Nuns Do Things because they’re nuns, I guess. That level of comedy kept me away from the movie for 28 years and kept me from enjoying it much when I finally saw it.

What is it with these late ‘80s/early ‘90s comedies that try for four quadrant appeal by ending with people being chased with guns?

Adam: My guess is Disney decided Touchstone Pictures was going to be Disney for Adults but instead of making movies for adults, they just made Disney movies and added adult content. Once it proved successful in Three Men and a Baby, it became a formula copied by other studios (like Twins at Universal) and in-house (with another Touchstone Pictures movie like Turner & Hooch). That’s just my gut feeling. I have nothing to back it up other than a hunch. This movie would have been so much more interesting if it was just a gangster and his singer girlfriend comedy starring Whoopi Goldberg and Harvey Keitel. 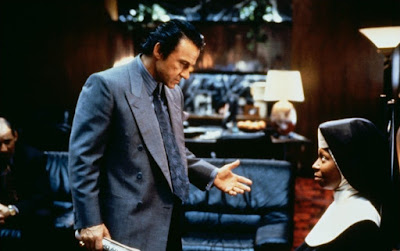 I want to get back to Whoopi Goldberg for a minute because I like her too, but often am not interested in seeing her movies. After Sister Act, she became the highest paid actress in Hollywood (for Sister Act 2: Back in the Habit) but also had a run of really underwhelming films like Theodore Rex, Bogus, Eddie, The Associate and Ghosts of Mississippi. Why do you think stars go on bad runs like this where they have the clout to get movies greenlit but repeatedly pick the unpopular/bad projects? This happens with so many stars.

Patrick: Who knows for sure, but I’m guessing it’s not just one thing. I think star vehicles tend to be a little flimsy to begin with at the script stage because they’re so often “high concept,” but maybe some actors are attracted to them because of the payday and because they’re so prominent in the film. Then I’m guessing there are a bunch of opinions from the stars themselves and from their agents/managers who need to have input about what that star would or would not do on screen, and eventually there are so many opinions that anything once artistic about the endeavor just dies. It’s easy for us to look at something like I Love Trouble and wonder why Julia Roberts ever thought it was a good idea, but maybe there was, at some point, a version that could have worked and that’s what she signed on for.

Do you think we would have more patience for this movie if it came out in 1962 and not 1992? I can think of comparable movies that I applaud for being timeless, but with Sister Act I just get stuck on it being lame. 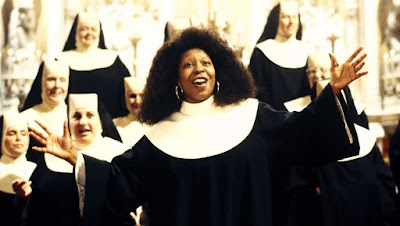 Adam: I absolutely do. Many older movies get more latitude to be quaint, corny, and theatrical than contemporary movies do. It makes sense as film and society evolved over time. I appreciate the attitudes of older movies because it provides a time capsule for how the era (era) felt. By 1992, so much was happening culturally that a movie like Sister Act feels deliberately unchallenging and lame as a result. It’s acting like Motown music (which is great, don’t get me wrong) is a new thing. By the speed of this convent, are they just getting to ‘90s music right now? Are they singing “I Would Do Anything For G-D but I Won’t Do That”?

This was the only wide release for May 29, 1992 so we’ll skip the portion where we go into the other movies that came out this week. Instead, did you have any surprises from going through May 1992? I thought it was a solid enough start. Some bad or flawed movies but interestingly flawed and a couple I still really enjoy with One False Move and Encino Man.

Patrick: Yeah, One False Move is the real gem for the month so far. The two franchise movies were an interesting study in that one (Alien 3) tried to go in new directions and, for me, comes up short, while the other (Lethal Weapon 3) desperately tries to give us more of the same and comes up similarly short. Of everything we’ve watched so far, I can’t believe Sister Act was the second biggest success. To me it seems like a movie that should have come and gone.

What are we talking about next week?

Adam: Patriot Games, starring Harrison Ford in his first film as Jack Ryan. See you next time!
Posted by Patrick Bromley at 5:00 AM