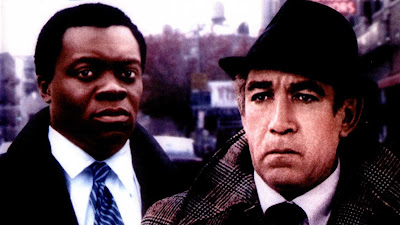 The review duo who's doing whatever they had to do to survive.

This was my first viewing of Across 100th Street, and I really enjoyed it. It’s elegantly made (shot on location in New York) and beautifully acted, with particularly strong performances from Kotto, Benjamin (whom I primarily know and love from Do the Right Thing), and Gilbert Lewis as Johnson’s enforcer, Shevvy. Moreover, Luther Davis’ screenplay authentically weaves tension and conflict between the rival factions without getting didactic; despite all the racial differences, the most important color is always green. This is my favorite #Junesploitation discovery so far, a movie I’ll be coming back to quite a bit in the future.

Adam, what did you think of Across 110th Street?

Adam: Overall, I liked the movie. I had one drawback that affected my enjoyment and that’s the A-story between the two leads, Anthony Quinn and Yaphet Kotto. Maybe I was tired when I was watching the film, but it seemed like this section of the movie was either underwritten or not enough scenes were dedicated to it. I kept expecting In the Heat of the Night, but their dynamic didn’t ever come alive for me. Maybe the subtlety was the point? I thought the rest of the movie was terrific when it focused on the robbery (especially the Paul Benjamin scenes) and the dueling factions between Anthony Franciosa and Richard Ward, who is incredible in this movie. He reminded me of George C. Scott in his voice especially. I think this part of the film is so good that it only makes the Quinn and Kotto material suffer by comparison, despite Quinn’s performance being strong and different from the silliness I knew from many of his ‘90s roles. When the final moment happens (which I won’t spoil), I think it’s meant to land really impactfully, but it felt like more of a shrug to me because the main story is concluded, and the rest are odds and ends. Am I missing something here? Also, to no fault of the movie, I kept wanting the title song to come back because the version played in the movie is different from the one I was used to from Jackie Brown. 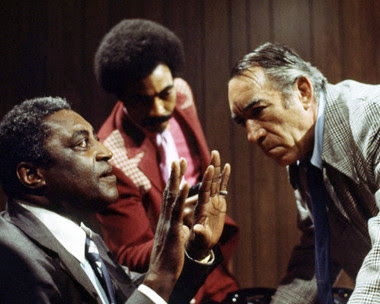 Rob: I can definitely understand your point when it comes to the drama between the lead cops, but I actually found the subtlety of their dynamic more interesting than some of the more pronounced approaches we see in other films. So much of Kotto’s anger is repressed and unspeakable because of his inability to connect with the black community (as a cop) or the cops (as a black man). He’s stuck in the middle, and it seems he’s committed himself to the straight and narrow despite the temptations to waver. The key to the Quinn/Kotto relationship, to me, is the scene where it’s revealed that Quinn is on the take. Not only is he on the take, but he’s on the take from the black crew rather than the Italian one. It really undercuts a lot of what Quinn sees as the “moral high ground” of his own bigotry. Once that corruption is exposed, he has to rely on Kotto’s professionalism for his own preservation. It’s super gross, but it’s human. That’s what I meant when I said the conflicts were more layered than we’d expect. So much of it is in what isn’t said between them, rather than what is. The film seems to assume its audience — and its characters, actually — has already seen In the Heat of the Night. I’d still like to see more between them, though, just because I like the characters so much.

And yeah, how is it possible that we don’t get a reprise of Bobby Womack’s title song? It feels like a no-brainer. What else stood out for you?

Adam: It was really violent in a way I wasn’t expecting. I figured it would be somewhat violent, but the shootings really land impactfully in Across 110th Street. Maybe I was set up by Jackie Brown again, thinking it was going to be more of a lounge movie than a dive bar movie, so to speak. I also really appreciated being able to see a fully fleshed-out Paul Benjamin performance since I’m so familiar with him as one of the three neighborhood observers in Do the Right Thing. I’ll never be able to watch his performance in that movie the same way again (in a good way). 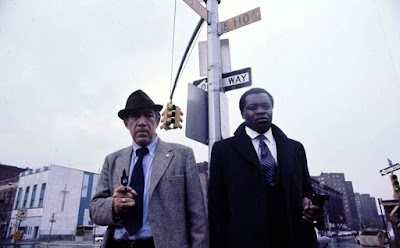 Again, not getting into spoilers, but do you ever find yourself reacting with irony to bleak endings in an American ‘70s movies? I wonder if at the time it ever became like an inside joke, where a film ends in the most despairing way possible and the audience was like “Of course! Because the 1970s!” Maybe JB can chime in on that one in the comments if he’s reading this. To be clear, I don’t think the filmmakers did this ironically (my impression is they were mirroring the national mood), but it’s such a trope of films from the era (era).

Rob: It is kind of funny how much of a trope it became. I guess it was a reflection of our collective social consciousness? “I’m mad as hell,” and all that. There’s a degree of verisimilitude to the bleak ending — especially in this movie — but there’s one particular thing that happens that definitely feels thrown in for misery’s sake. Anything else on Across 110th Street? What are we covering next week?

Adam: Nothing more other than a recommendation. It’s at minimum a solid crime thriller and often more than just that. Next week we’re back celebrating Cannon Films day with a review of Cyborg. Until next time…