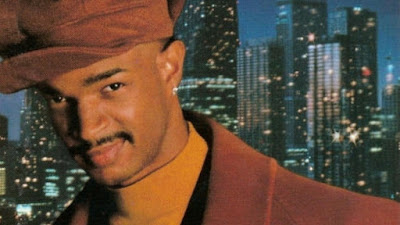 Adam: Welcome back to Summer ‘92 Redux, our revisit of the Summer 1992 movie season. This week, we’re discussing the Damon Wayans star vehicle ‘Mo Money, directed by Peter Macdonald (Rambo III). Wayans plays Johnny Stewart, a con artist who decides to straighten his life out and get a job to appease his deceased cop father’s former partner (Joe Santos) and impress a woman he meets and crushes on (Stacey Dash) who works at the Dynasty Club credit card company. Little does Johnny know that this company is a hotbed of crime and murder under the direction of Keith Heading (John Diehl). Dynasty Club apparently doesn’t have a CEO or Board of Directors who would advise wholesale black market crime and fraud isn’t a good idea. The film also stars Harry J. Lennix as a dweeby third wheel and Marlon Wayans (in his screen debut) as Johnny’s brother Seymour, who takes part in Johnny’s hustles.

I could watch ‘Mo Money every month. In fact, I’ve watched it twice already since quarantine began. It’s a very watchable mess of a movie, telling three separate stories over the span of 90 minutes: 1) a con-artist comedy consisting basically of In Living Color skits; 2) a romance with Wayans and Dash and 3) a violent and dark corporate action thriller. If you would have told me in 1992 about how many murders were going to take place in a movie featuring the hit Luther Vandross-Janet Jackson single “The Best Things in Life are Free,” I wouldn’t have believed you. This is such a curious star vehicle for Damon Wayans. It’s basically a bridge between his light comedy on television and the action star persona he started cultivating with The Last Boy Scout. It doesn’t work as a movie, but it’s a fascinating comedy that I have to admit I like.

What did you think of ‘Mo Money? Did Damon Wayans’ career go as you thought it would? It didn’t for me. He was the funniest man on television (imho) for a while and it never quite translated on the big screen. 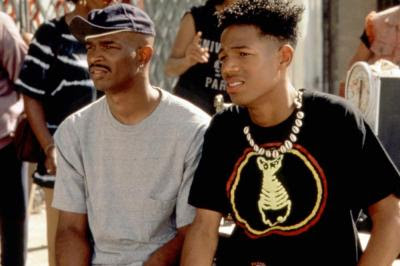 Patrick: Mo’ Money will always hold a weird, special place in my heart because it was the first first-run movie I ever saw by myself. I had been walking to our local second-run theater to see stuff by myself for a few years at this point, but somehow I convinced my mom to drive me to a theater, buy my ticket at the box office (because it’s R-rated), and pick me up for the opening night showing of Mo’ Money. I don’t think I had seen it since then.

This is, as you point out, a crazy movie. I think much of that can be attributed to the fact that Damon Wayans wrote the screenplay himself and lacks the discipline as a writer to dial in on any one idea -- he wanted to make a movie that worked as a vehicle for himself while still being all things to all people. It reminds me a little of the movies someone like Fred Williamson used to make in the ‘70s, only a comedy version: it’s got to have action, he’s got to get the girl, but more than anything he’s got to be a movie star.

Back when he was on In Living Color, I thought Damon Wayans was the funniest person on the show. I don’t think that translates to Mo’ Money, in part because there are only a few sequences that are outright comic but way more so because those few scenes have not dated well. All of the “humor” is at the expense of gay people, women, or people with special needs. They’re carryovers from In Living Color -- Damon Wayans doing his greatest hits -- and they stop the movie cold. Truth be told, I think something like The Last Boy Scout is a much better vehicle for Damon Wayans, but maybe that’s just because it’s a way better movie.

Marlon Wayans comes off pretty well, I thought, He has his usual tendency to go way too big, but he’s got energy and comic timing and it made me want to see more of him on screen. Plus, I like his Fishbone shirt. Speaking of Fishbone, I’m guessing you’re a big fan of this movie’s soundtrack?

Adam: The soundtrack is great. My favorites are the Luther-Janet track I already mentioned and “Money Can’t Buy You Love” by Ralph Tresvant. It’s like honey being poured into my ears. I love slow jams! I laugh every time “Forever Love” by Color Me Badd plays in the movie because Damon Wayans and Stacey Dash are at a club, but they have a junior high slow dance for some reason. I miss the early ‘90s when every movie had a soundtrack and those soundtracks were basically record labels making a statement by giving their acts an opportunity to shine. 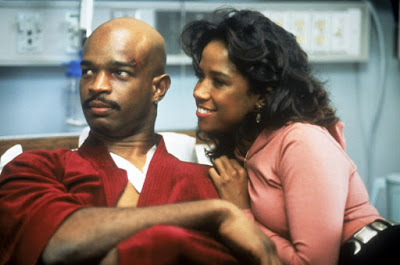 I remember being a little bit scared of this movie when I saw it back in 1992 (1993 on video?), specifically the subway scene where the mailroom supervisor is beat up and then stabbed in the back while a dude is playing the bongos. For some reason the detail of him trying to eat and then getting murdered (and punched with pizza) is forever burned in my brain. I think about it 20 percent of the time I take the CTA. Speaking of that subplot, I’ve grown to appreciate John Diehl’s performance as the main villain. He seems to be having a lot of fun playing such an evil person. Diehl always plays a sketchy character (except in Kickboxer II, where I was waiting for a heel turn that never materialized). He might crack the top 10 actors I’m afraid of who I don’t think are acting. Plus, he looks a lot like a kid from across the street when I was in grade school and junior high. Not the kid’s dad; the actual kid looked like John Diehl.

Do you think Harry J. Lennix believes he’s typecast at this point? He’s so good at playing the stuffy prick in movies. It’s not high comedy, but I always find it funny when Damon Wayans impersonates him in ‘Mo Money. It’s one of my favorite parts of the movie, although in hindsight I wish it were Wayans and Lennix making fun of Stacey Dash. Why is she buying the Ice Cream Dream book for herself?

Patrick: This was the movie that put John Diehl on my radar. He acted in a ton of stuff before this, some of which I had already seen at this point, but didn’t register him as an actor. Since seeing this movie, I always think to myself “That’s the bad guy from Mo’ Money” instead of committing his name to memory. I guess he makes an impression, even if I sometimes think he’s in a different movie. I can’t believe how long that chase/action sequence goes on at the end. 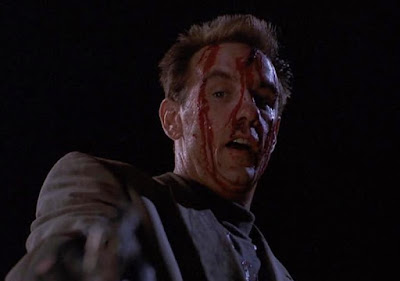 I, too, like when Damon Wayans impersonates Harry Lennix, especially his line about what a guy with a tiny penis eats for breakfast. He’s so good at playing a stuffy prick that he’s rarely asked to do anything else. I like getting to see him play a sympathetic character on a show like Dollhouse, because he’s actually very likable when not forced to be an uptight douche.

How was this a summer release? How did this not come out in like February or September? And would it have fared better if it did?

Adam: Summer ‘92’s film calendar is an enigma. This movie practically had its opening weekend all to itself except for Mom and Dad Save the World, which I didn’t rewatch because Jeffrey Jones is the star. I don’t remember liking that movie anyways. ‘Mo Money grossed $40M domestically (5th highest for the month) on a $15M budget, so it was a hit. I’m not sure if it would have done better in that specific February or September, although I get what you’re saying. It would have been in the wake of Wayne’s World and Medicine Man in February and behind The Last of the Mohicans and Sneakers in September.

Patrick: This is a weird movie for a weird summer. I wish it would have been a better vehicle for Damon Wayans, because he had the goods to be a real-deal movie star. Instead he went on to vehicles like Blankman and Major Payne. In fairness, I haven’t seen either one.

Adam: I saw both. You’re not missing much. We’ll be back next week with a revisit of Robert Zemeckis’ Death Becomes Her, a movie that I want to rewatch even more because the trailer uses the Tales from the Crypt theme. See you next time!
Posted by Patrick Bromley at 5:00 AM