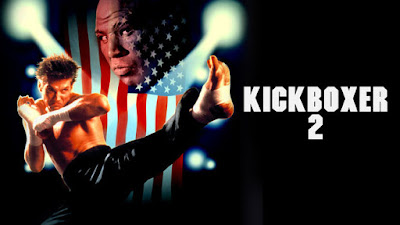 Rob: Our #Junesploitation coverage continues with 1991’s Kickboxer 2, Albert Pyun’s follow-up to the original 1989 film starring Jean-Claude Van Damme. Set one year after the events of that film — in which Van Damme’s Kurt Sloane achieves kickboxing supremacy with the help of his brother, Eric (Dennis Alexio) — Kickboxer 2 introduces a third Sloane brother, David (Sasha Mitchell). Driven from the kickboxing scene by family tragedy, David runs a small gym for neighborhood kids and refuses most offers to fight competitively. When the bills pile up, however, David agrees to work with a smarmy promoter (Peter Boyle), which leads to a confrontation with Thai fighter Tong Po (Michel Qissi) and his manager, Sangha (Cary Tagawa). When David’s protege (Vince Murdocco as Brian) is drawn into the drama, David will need the help of Xian Chow (Dennis Chan), the man who trained his brother in the first film, to settle the score once and for all.

This was my first viewing of Kickboxer 2, and I had a great time with it. It’s that Platonic ideal of an ‘80s-’90s sports movie sequel, one that follows the familiar beats of series like The Karate Kid and Rocky while retaining enough charm and charisma to not feel like a rip-off. Like Pyun’s Cyborg, it plays its genre tropes so sincerely that we don’t mind their familiar nature. I love sequels that introduce lost/unknown siblings of previous protagonists. I love sequels that dramatically recontextualize the endings of the previous film (even though this particular variation might anger some fans). I love movies that are fun. Remember fun? This felt a lot like our viewing of The Karate Kid Part III, honestly: It’s an easy-to-watch movie with medium-sized stakes that gives us exactly what we expect in exactly the way we want. It’s so movie.

What did you think of Kickboxer 2? 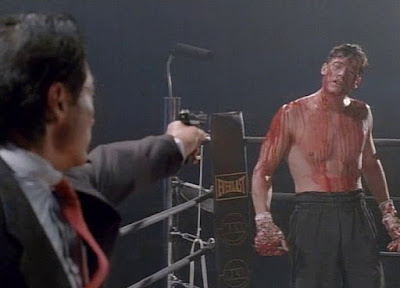 Adam: I liked it just as much as you. I’ve seen the original Kickboxer and enjoy it, but my memory of the movie is hazy. It’s not a JCVD I return to all that often because if I want a tournament movie from him, I just go back to Bloodsport. I had never seen Kickboxer 2 before either. I felt a bit gross sometimes watching this because of Sasha Mitchell being the lead (you can do an internet search to read about his personal life) but the cast is so stacked with “that guy” character actors and fun newcomers that it’s easy to not get bogged down into thinking this is a Sasha Mitchell movie alone.

Rob: Full disclosure, I often lost track of the difference between David and Eric. I kept having to scroll back to that opening bit to get better looks at their faces.

Adam: This feels like the most 1991 movie to me. That was a time when so many guys with fighting/martial arts experience were getting a shot in film. A lot of the results worked because, imho, tournament movies are very hard to screw up. Even the bad ones are usually fun. Kickboxer 2 is interesting because it starts out relatively campy and light (the teenage girl who brings street kids into Sasha Mitchell’s gym literally pulls them by the collar to the building, Dennis Chan trains not only Mitchell but eventually an entire park full of homeless men in martial arts warm-ups), but then it gets real dark. For the first act, I kept wondering why they were saying Van Damme’s character died because my memory was he beat that film’s big bad - also Tong Po - but in Kickboxer 2 it’s revealed (spoiler) that Tong Po was so humiliated by losing that he shot and murdered the Van Damme character. The rest of the movie I kept thinking to myself how Sasha Mitchell better kill Tong Po because even if he wins, wouldn’t Tong Po just shoot David Sloane anyway? I wonder if Albert Pyun deliberately killed off the Van Damme character as a screw you to the actor since my inference is they didn’t get along on Cyborg (Van Damme re-edited that movie himself, which I’m guessing Pyun didn’t appreciate).

Rob: The way the camera lingers on the dead body of the van Damme look-alike, it feels pretty pointed.

Adam: Rob, please describe the music in this movie. We were texting about it this morning. It’s special.

Also, just for the record, I think I really like Albert Pyun movies. He’s 3 for 3 for me with this, Cyborg and Nemesis thus far. 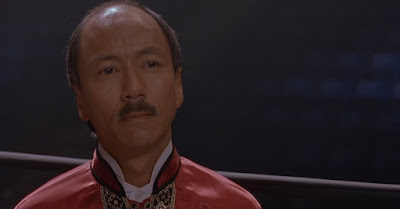 Rob: The music! This goes back to what I was saying before about playing genre tropes straight: Pyun needs to introduce his new protagonist, right? Other filmmakers might open with David in a coffee shop, talking to a friend who explains his background to us: “I know you haven’t fought since your brothers died. You seem haunted by their memory!” Pyun is a smart filmmaker who likes to have fun, though, so we instead get a montage of David training set to “My Brother’s Eyes” by Eric Barnett. “Suns will set and suns will rise; But I still see my brother’s eyes.” Twice the work in half the time! In the second act, David has rejected the help of his friends. Some might argue he’s a man alone. Cue “A Man Alone” by Savory Brown. And then, when it’s all up to him, we get “It’s All Up To You” by Daniel. To be clear: These are brilliant decisions that add to the film immeasurably. What do you call this genre of soundtrack rock? I want one for each and every situation in my life.

And yeah, it’s safe to say we’re both solid Pyun fans, now. Maybe not Bromley-level, but we’ll get there. One last thing I want to mention was how much I loved that the final battle took place in front of an empty arena a little while after it was packed to the rafters. After some fairly intense drama that I won’t spoil, Shang Tsung walks over to David and is like, “We’ll do your match in two hours. We don’t have any movie time left for training or promotion, so we’ll just get it over with.” This climax is COVID approved!

Anything else on Kickboxer 2? 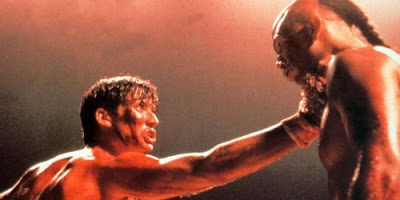 Adam: Just to call out a trio of supporting performances I enjoyed. I was really caught up in the Vince Murdocco arc. The bad guys eventually chew him up and spit him out. I think it’s the little details like adding his mom and her bad pot roast that made it feel more impactful. Don’t get me wrong, it’s still action cheese but they brought a new depth to the “overeager young upstart” trope that we’ve seen in Backdraft and Lethal Weapon 3. I also thought it was cool Pyun brought Vincent Klyn back (from Cyborg) to basically stand around and look scary in a suit. He does nothing else, but it’s charming because it’s like if I were making a movie and I gave you that part just as an excuse to have you around on-set to hang out. Lastly, John Diehl is in this movie and this movie breaks the John Diehl Rule that once you introduce John Diehl in the first act, he has to be evil by the third act.

This movie’s fun. It’s a great choice for Pyun Day.

Rob: Agreed. It’s a fun time. We’ll be back to our normal rotation next week, which means we’re back to Pixar! Join us then for a discussion of 1999’s Toy Story 2. Until next time…