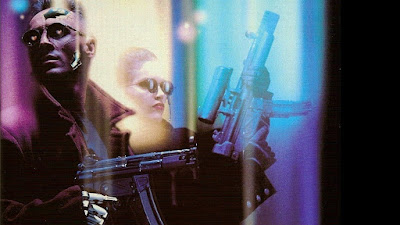 This is some Top 5 Pyun right here.

Though he's probably best known for being a Video Store Director -- a guy whose movies lined the rental shelves in the '90s and '90s, always available for customers looking to rent something -- few genre filmmakers have been better served by the high def revolution in recent years than Albert Pyun. While movie fans first experienced many of his movies on cable and VHS, they're really made for Blu-ray. That's because Pyun is a visualist -- a filmmaker who communicates his ideas with style and imagery and not through the scripts he's shooting, which don't always make a ton of narrative sense. Revisiting his work in HD and seeing it the way it's supposed to look can sometimes be like seeing the movies for the first time all over again. At least, that's the way it was with Nemesis.

One of only a few Pyun movies I can specifically remember playing theatrically around Chicago, 1992's Nemesis feels like the biggest, most expensive movie the director made since his debut feature The Sword the Sorcerer -- a film that was also deceptively cheap but stretched its budget to the max. In many ways the sum total of much of what Pyun has been working through his entire career -- it's a post-apocalyptic cyberpunk shoot-'em-up about the nature of reality, identity, and the dangers of technology -- Nemesis is one of Pyun's slickest, most satisfying films despite having a lot of rough edges. As an action movie, it kicks a bunch of ass. 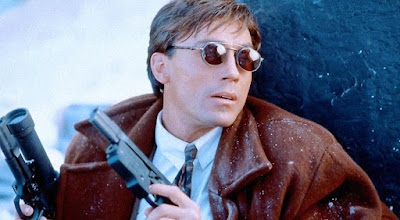 I already know I'm not going to be be able to coherently explain the plot of Nemesis, because it's not an especially coherent movie. If you watched Mad Max and Blade Runner and RoboCop and had a touch of food poisoning and then went to bed, Nemesis would be that night's fever dream. Olivier Gruner plays Alex Raine, a blade runner bounty hunter tasked with taking out illegal androids, now commonplace in an unspecified future Los Angeles. An encounter with a group of android resistance fighters leaves Alex badly injured and reconstructed with cybernetic technology, now working as an independent contractor free of the LAPD. However, his old boss Commissioner Farnsworth (Tim Thomerson, always welcome) brings him in for One Last Job: he has three days to locate his ex lover Jared (Marjorie Monaghan) and stop her before she can leak the plans of an upcoming summit between the U.S. and Japan to the resistance; if he fails, a bomb implanted in Alex's chest will detonate and kill him.

That's a pretty stripped down, straightforward summation of Nemesis, except the movie is anything but straightforward. It jumps around in time and place more than once, constantly introducing new characters who all speak in exposition and backstory. Star Olivier Gruner goes through three different haircuts in the first half hour. I've seen the movie a couple of times and I still find myself disoriented each time I come back to it, enough that it's easy to become disengaged from the mechanics of the story (such as they are) pretty easily and let the nonsensical cyberpunk speak wash over me. But then Pyun will stage another action sequence and I'm pulled right back in, because Nemesis is a movie that works much better as orchestrated violence and kinetic movement than it does as a movie about ideas. Like I said, kicks ass. 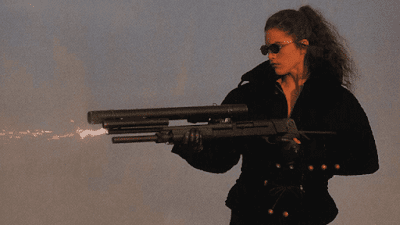 The story goes that Nemesis was meant to be a vehicle for Megan Ward, whom Pyun had directed on Arcade, one of his two collaborations with Full Moon Features. Some of the financiers, however, were looking to make kickboxer Olivier Gruner a star and agreed to fund the film provided their guy was cast as the lead. So, for the second time in a few years, Pyun was saddled with a leading man who wasn't his pick, but rather foisted upon him by people in suits looking to anoint a new action star (Jean Claude Van Damme wound up in Cyborg the same way). Writing under the pseudonym Rebecca Charles to avoid the perception of too many Albert Pyun projects, Pyun reworked much of the dialogue -- like Van Damme, Gruner is a native French speaker -- and the plot to focus on a cop instead of the intended 13-year old girl. The results close the gap between this and Blade Runner even more, but there are worse movies to which one could be compared.

The cast alone makes this one of Pyun's most accomplished efforts, as it reunites many actors from his stock company and introduces some welcome new faces. In addition to Gruner and the aforementioned Tim Thomerson, there's Brion James and Nicholas Guest, both Pyun regulars. There's Thom Mathews of Friday the 13the Part VI and Return of the Living Dead. Yuji Okumoto and Cary-Hiroyuki Tagawa both show up. Vincent Klyn, so memorable as the villain from Cyborg, is in the cast. Deborah Shelton from Body Double is in here. Hell, even Tom Jane shows up, billed under the name Tom Janes. It's a veritable who's-who for Albert Pyun fans, or just fans of ''80s and '90s genre movies in general. 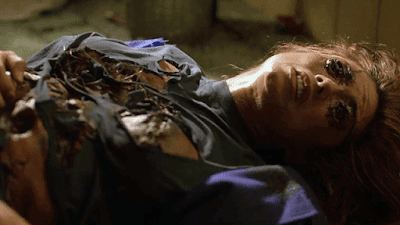 It's also some of the best action Pyun has ever directed. The pyrotechnics (everyone is a robot, so everyone showers sparks when they get shot) and stuntwork are first rate, and Nemesis finds the filmmaker particularly inventive with his camera. One standout sequence finds Gruner escaping a hotel room several stories up by shooting through the floors and free falling to the bottom, with Pyun's camera attaching itself to his body as he drops through each level. It's so goddamn cool. Another scene has Gruner and Thom Mathews in a fist fight-turned-firefight as they slide down a chute covered in mud. The prosthetics are effective, and one stop-motion sequence near the film's end is particularly cool. The photography is fluid throughout, making the movie feel bigger and more expensive than its low budget would suggest. This is one of Pyun's best-directed efforts -- a low-budget classic of the cyberpunk genre. I don't totally know what's happening at all times, but I love it.

I've said it before and I'll say it again: Albert Pyun is one of my favorite filmmakers (I have a lot of favorite filmmakers). I love his commitment to making movies no matter what and his love of genre, particularly fantasy and sci-fi. I love the way he never allows limitations to stand in his way, whether budgetary or interference from producers insisting on casting decisions or for cuts to be made. Even the theatrical release of Nemesis isn't exactly what Pyun intended; I bought a copy of the director's cut directly from Pyun at a screening a few years ago (a set that also included the Slinger cut of Cyborg and a proper widescreen version of Mean Guns), and a version is available with commentary on MVD's Blu-ray of the movie. The theatrical cut is still one of my favorite Pyun movies, and one of the best expressions of what he's about as a filmmaker as I've seen. If you want to understand what makes him great, Nemesis is a good place to start. It's pure Pyun.