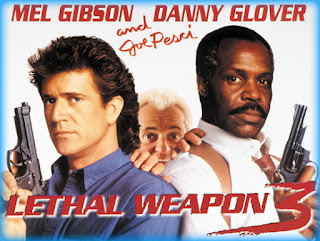 It’s hard to say it. I hate to say it. But it’s probably Patrick and Adam Riske.

Adam: Welcome back to Summer ‘92 Redux, our revisit of the 1992 Summer Movie Season. This week, we’re covering the second highest grossing movie of the summer: Richard Donner’s Lethal Weapon 3, with returning stars Mel Gibson, Danny Glover, and Joe Pesci and a welcome addition to the franchise by Rene Russo. Like its contemporary action series rival, Die Hard, the Lethal Weapon movies are a study (I think) of diminishing returns. The original further popularized the buddy cop movie formula after earlier successes like 48 Hrs. and Running Scared (1986) and Lethal Weapon 2 upped the mayhem and smoothed out the rougher edges of the first movie (namely the Martin Riggs character played by Mel Gibson) but to a degree that was still appealing. By the time of Lethal Weapon 3, the invention was gone and the franchise was a money machine starting to need occasional repairs (e.g. Joe Pesci as Leo Getz, who by LW3 is a cartoon). That being said, Lethal Weapon 3 is totally watchable and a pretty interesting revisit in 2020, benefiting in no small part from Russo bump. I mean that in a rated-PG way.

An autobiographical pause: This was my birthday movie in 1992 (I turned 10) and the first Lethal Weapon movie I saw in theaters (at One Schaumburg Place, to be exact). I also remember this being the first R-rated movie I saw in theaters since the first R-rated movie I saw in theaters, Terminator 2: Judgement Day. My parents were encouraging me to pick Encino Man, but I was all in on Alien 3. The compromise was Lethal Weapon 3, which was the less severe R-rated option. What also made this a memorable screening was my sister said she’d pay me $5 if I laughed at Danny Glover bits but not at Mel Gibson, so I did to the confusion of my parents. I also recall leaning to my dad halfway through and asking, “Do you like this movie?” and he shushed me. He did the right thing. I have a friend of over 20 years who comments to me during movies in theaters and I just grunt and wave him off. Like father like son.

Patrick, what is your history with Lethal Weapon 3 and how did it hold up for you on this watch? Isn’t the Sting song during the opening credits fucking fantastic? 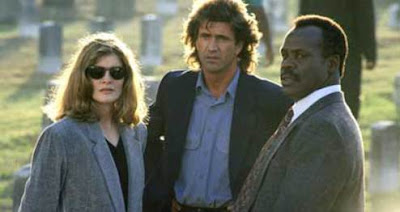 Patrick: I hope you saved that $5 bill, because you totally earned it.

I, too, saw LW3 at One Schaumburg Place with my Dad. It was a divorce movie, because pretty much any action movie that came out was a divorce movie. This was the first Lethal Weapon I saw in theaters after seeing Lethal Weapon 2 about 100 times because it was constantly showing up on our Pay Per View channel for free (by some accidental glitch) and I watched it every single time because I thought it was some kind of miracle that it was on for free and I couldn’t afford to not watch it. I’ve long felt, like you, that Lethal Weapon is proof of the Law of Diminishing Returns, and that Lethal Weapon 3 is only slightly worse than the movie that precedes it. This viewing changed that, because now I’m thinking it’s a pretty fucking huge drop-off from Lethal Weapon 2. I agree with you that the addition of Rene Russo is something the movie does very, very right, but this time it felt like just about the only thing the movie does right. Otherwise, this might as well be Lethal Weapon 4, which I’m convinced is a movie they were making up as they went along. This has the same kind of loose, aimless messiness, and not in a good way. They lean so hard into the comedy that the action has very little stakes, and, as you point out, all the rough edges that make Martin Riggs such a great character in Lethal Weapon -- a movie I still believe to be the best buddy cop movie ever made -- kind of a nothing of a character. The only moment that recalls the old Riggs is near the end when he tells another character he’s going to eat his fucking heart. Then again, that’s just Mel Gibson’s pillow talk.

Adam: It’s a weird line of dialogue. I wrote it down in my notes.

Speaking of which, Gibson says this line to the film’s main villain, Jack Travis (Stuart Wilson). He’s not a good villain but I do find him interesting for a variety of reasons: 1) Jack Travis is such a stock-interchangeable movie name that two years later the great Keanu Reeves was named Jack Traven in Speed, 2) Stuart Wilson looks like every asshole little league baseball coach who cares more about winning than the kids having any fun and 3) I love that his master plan is to walk in and out of the LAPD stations stealing guns to sell to gangs to launder the money to build houses using former collars on parole as his laborers. It’s so ridiculous.

Before we get to the other characters, is Riggs a bully and I just never realized it? Also, it needs to be said that Riggs is guilty of one of my least favorite tropes, which is laughing at everything during The Three Stooges because that’s how comedy works, right? 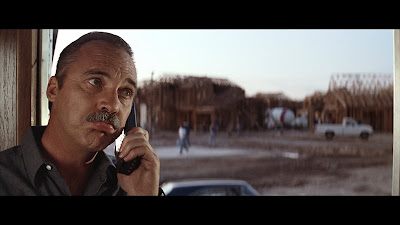 Patrick: Jack Travis kind of sucks. If this was a Lethal Weapon TV show (of which there now is one), maybe he would be fine as a villain of the week. As the Big Bad of a franchise entry, he’s pretty lame. Even the “dirty cop” angle is mostly left unexplored.

There’s so much of Mel Gibson ad libbing that made the final cut of this movie and I wish Richard Donner had told him “NO, MEL.” It’s never, ever funny and it’s always obvious when it’s him being all “Hey, I have an idea for a joke here” and not something that was in the script. It starts with that “cat-tastrophe” joke in the opening scene. Speaking of which, that opening started the movie on a sour note for me this time. Like, just wait for the fucking bomb squad guys. It’s not funny that blew up a building because you’re assholes.

Adam: I couldn’t unsee The Hurt Locker during that scene.

Patrick: Since we’re talking about stuff that’s not funny, what do you think of Joe Pesci this time around?

Adam: He’s not funny here. Everything about Leo Getz is a bridge too far in Lethal Weapon 3, down to the marketing of the movie itself. Remember the poster where his name is in cursive for quirk sake? I also read that movie theaters had standees for LW3 where Leo Getz would bob up and down to peek over Riggs and Murtaugh’s shoulders. OK! The only positive I’ll say about Joe Pesci here is I’m happy that he probably got a big payday this time around to capitalize on his clout from Lethal Weapon 2, GoodFellas, and Home Alone. I love the guy as an actor in most cases, but not here. He had a hell of an early-90s. In 1992 alone he was in this, Home Alone 2: Lost in New York, The Public Eye, and My Cousin Vinny. Do I need to see The Public Eye?

But, question for you, is he the worst character in the movie? My vote goes to the armored car driver with the hots for Danny Glover. It’s an endless bit to begin with and then the filmmakers think we love it so much that it requires a callback…. what?!

I should probably mention a few things I like about the movie. Here’s what I can come up with:

1. I enjoy imitating the saxophone score. Next time I’m on the podcast I’ll show that talent off. Plus, unrelated, I know the release date off the top of my head for almost any movie released in the ‘90s.
2. This movie features a trope I adore which is the upstart rookie who then gets either horribly injured or killed and we’re supposed to be like “Oh that beautiful angel, if only he checked that door for heat!!!!”
3. The freeway chase scene is fun because every highway chase scene is exciting. Even the one in Lethal Weapon 4 is good.
4. I like Russo’s line “Close is a lingerie shop without a front window.” Riggs doesn’t get it and neither do I. Apparently this was (according to IMDB) an ad-lib by Russo that Gibson didn’t understand either, but it remained in the movie.
5. That Sting song! I’ve watched the music video for it at least six times this week.

He was a great character in the second installment, but Leo Getz is like the Urkel of this movie, because this is when the Lethal Weapon franchise turns into a full-blown sitcom. The humor is so broad and often obnoxious. The action is ok because Richard Donner knows what the fuck he’s doing, but then the movie tries to take on some issues of the day and you’re like “Wait, I’m just trying to watch this stupid buddy cop movie” and you feel bad for enjoying watching people get shot. 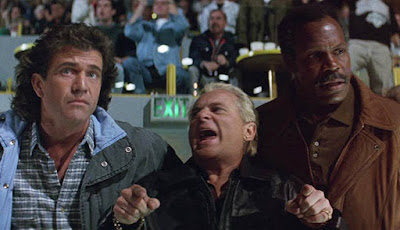 I think you’re right about Delores Hall’s armored car driver being the worst character, though. Talk about something that starts bad and only gets worse.

Adam: Sure you can. The good always outweighs the bad in such considerations. Also released this week in a very limited release was a Bill Paxton/Michael Ironside horror comedy directed by Chris Walas called The Vagrant. Have you ever seen that? I watched it last night. It’s fine. It felt a little long even at 90 minutes. When it’s good it reminded me of a pleasant discovery you sometimes come across at a 24-hour horror marathon.

Patrick: I’ve never seen it. I remember Scream Factory putting it out on a four-pack, but I never picked it up. I like Bill Paxton enough to want to see it, though. Are there good effects at least? I would hope so, with Chris Walas behind the camera.

Adam: Yeah, I bought the four-pack. The effects are good. I liked the tone which was somewhere between Freaked and a Tales from the Crypt episode. It just ran out of gas for me.

Next week is Alien 3 or Alien Cubed, which I refuse to write correctly because it irritates me for some reason. Real talk: I don’t know how to type the cubed function. I never learned out of protest in high school and it stuck for over 20 years. No need to leave a comment; tell me at my funeral. Just a heads-up to our readers, we’re only revisiting the theatrical cut of Alien 3 since that’s what was out in Summer 1992. Feel free to chime in the comments of the review next week on the assembly cut, which I’ve heard is better. See you next week!
Posted by Patrick Bromley at 1:00 PM