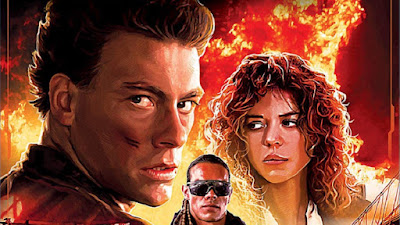 The review duo who are named after guitar companies.

Adam: Cyborg is a movie I’ve grown to love. When I saw bits of it on cable back in the early ‘90s I found it perplexing. Despite having those sweet Cannon Films rhythms I knew from Masters of the Universe, this was a beast unto itself. I was 7 years old, so I didn’t quite get what Albert Pyun was going for, let alone was I able to handle Vincent Klyn as Fender, who was nightmare fuel for young me. In recent years I’ve gone back to watch every theatrically released Jean Claude Van Damme movie and Cyborg is an underrated bright spot that feels similar to some of his other movies (like the original Universal Soldier) but also entirely unique in others. I mean this as a compliment, but Cyborg often feels like you sent a student film crew out to a rock quarry or state park with leftover clothes from a school theatre department and shot an apocalyptic action movie. Therein lies much of the movie’s charm. It was edited into its current release by Van Damme (director Albert Pyun has a preferred cut of the movie known as Slinger) and morphed into a to-the-point, barebones action film. As that, I think it works really well. It also has a low-fi sincerity I just adore. I want to live in the world (not literally, but cinematically) long after the end credits roll.

Rob, what did you think of the movie? Was this your first time watching it?

Rob: This was my first viewing of Cyborg, and you really nailed it with “low-fi sincerity.” This is the best kind of B movie, one that isn’t cynical about its genre or constricted creatively by its low budget. I haven’t seen enough of Pyun’s work to recognize his signatures (though the more I watch, the more I’d like to), but I was amazed by how much care and invention he puts into Cyborg. Frankly, he directs the hell out of it. Through blocking and shot sequencing, he squeezes life out of so many moments that other filmmakers (especially on this budget) would approach more conventionally. It’s those “in-between” moments, the ones that connect one action set piece to another, that separate the Terminators and Halloweens of the world from the less-successful films of that ilk. Even though it’s stripped down, as you said, it makes just enough time for character and subtle dramatics. 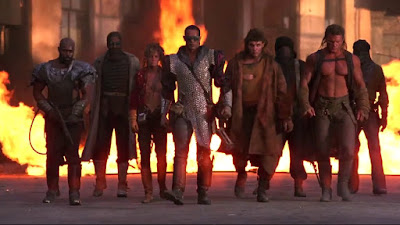 One of the things I really admired was how well Cyborg mixes subgenres. We all know it’s a reappropriated Masters of the Universe sequel, but it never feels like it’s knocking anything off. It’s a little Mad Max, a little Terminator, a little Blade Runner, and each of those adds a little shade without taking over the entire movie. It all works because there’s an actual narrative to go with the genre trappings. Earlier this #Junesploitation, I watched a movie called Wheels of Fire, a Mad Max-sploitation movie that acted as though getting everyone into post-apocalyptic S&M gear was 80% of the work. It had no other ideas, and that made me appreciate Cyborg that much more.

Have you seen Slinger? What else stands out to you about Cyborg?

Adam: I haven’t seen Slinger, but I’d be curious to see it. Maybe Patrick has. PB, what are your thoughts on Slinger? Is it easy to come by? I thought it would be on Albert Pyun’s website but it’s not unfortunately. (Ed. note: I have seen Slinger! I bought a DVD of it from Albert Pyun and his wife a few years back when they were in town for a one-night Pyun retrospective. It's an interesting curiosity, but I think I prefer the theatrical cut -- though that may just be because it's more of a finished film.)

One element that stood out to me with Cyborg is how good Van Damme is at the “Man with No Name” type of character. He’s an actor with a lot of range (it’s been shown over time even if he didn’t have that reputation right away), but he’s rarely called upon for stoicism. Normally, directors want to tap into his good looks or sense of humor and Pyun didn’t go that route for this Cyborg character. The actions literally speak louder than words in this one. I also really liked the presence that Vincent Klyn brings as the main villain. He’s immediately imposing and kind of alien as presented in the movie, which works because his gang is supposed to be lacking in all forms of humanity and empathy. If you like Cyborg, I would definitely recommend Nemesis to you. It was part of Patrick’s birthday marathon and has a lot of the same attributes as Cyborg. And Thomas Jane is in it! 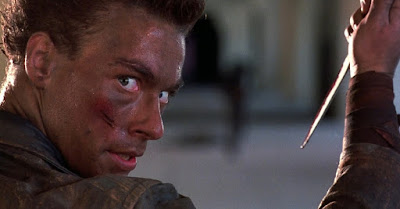 Cyborg was the last theatrically released Cannon Films movie after the studio went bankrupt in 1989. What are some of your favorites from the studio?

Also, here’s something that might be fun, what are your top Van Damme movies?

Rob: Oh, I’m not nearly enough of a completist to be able to compile a rated list of favorite Van Dammes, but some of his movies I enjoy include Timecop, Bloodsport, Kickboxer, and Hard Target. You and I watched Street Fighter earlier this year, which was...interesting. I still haven’t seen the original Universal Soldier, which I’ll try to rectify this month. You did turn me on to his YouTube channel recently, which feels very fun and wholesome.

As for Cannon — and it has to be said that I’ve probably seen 20% of the total Cannon canon — I like anything that leans into the schlock factor. Death Wish sequels, the Ninja series, Cobra, etc. Other than that, I remember liking 52 Pick-Up (#Scheidersploitation) and I’ll always maintain that Superman IV: The Quest for Peace is better than Superman III.

What are your favorites?

Adam: Like you, I’m not an expert on Cannon Films either. I do have some favorites, though. I adore Masters of the Universe. It was exactly what I wanted at age 5 and at age 38. I recently watched New Year’s Evil and thought it was a really fun, sleazy slasher movie. Lifeforce is one of my favorite Tobe Hooper movies. Death Wish 3 is quintessential Cannon Films to me, and, of course, Bloodsport and Kickboxer, also starring Jean Claude Van Damme. I’m an easy mark for martial arts tournament movies.

Fun story: I really want to see Platoon Leader. I remember the video store right next to my Grandpa’s hardware store had the poster up back in 1989 and 6 year-old me was really invested if my Dad and Grandpa had seen “the sequel to Platoon”.

Rob: Honestly, they could have fooled me. And I totally forgot that Lifeforce was Cannon. Love that one. What’s up next week?

Adam: Another Albert Pyun joint, Kickboxer 2. Until next time…