Two for One: THE 'BURBS & FRIDAY 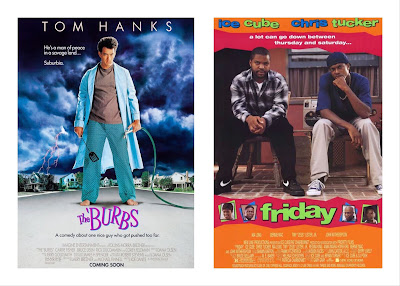 If I wasn't so obsessed with movies, I would be Ray Peterson or Ricky Butler from The 'Burbs or Craig or Smokey from Friday. I live a perfectly happy existence having never spoken to most of my neighbors. But it's simple human nature to be voyeuristic, and I know the lady across the street takes the trash out in her underwear every morning. People watching: It's the national pastime. Here we have two movies that couldn't be more different, yet they're both cut from the same Rear Window cloth. Alfred Hitchcock showed voyeurism perfectly in 1954. Thirty-five years later, Joe Dante shows it perfectly. And six years after that, F. Gary Gray and Ice Cube show it perfectly. Three films that show how our inner voyeur can end up consuming our lives.

Now, before anyone says anything, I realize I'm already breaking my own double feature rules. There's not a ten-year difference between The 'Burbs and Friday, but for me, this is a perfect double bill. I watch both films multiple times a year. Both are endlessly quotable, contain unforgettable characters, have great scores/soundtracks. And both suck you into their respective worlds. You feel like you're living in that cul-de-sac in The 'Burbs. You can smell the grass of the manicured lawns. You can hear the garbage truck approaching down the street. In Friday, you smell the weed. You feel the heat. You can smell Felicia. I think all movies try to do this. While most fail, Dante and Gray created worlds to which the audience is transported. 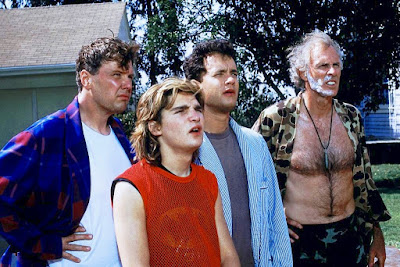 Watching these movies I found myself yearning for silly Tom Hanks and Chris Tucker. Don't get me wrong, serious Tom Hanks is great. But nothing compared to seeing Hanks lose his cool in The Money Pit or play the funny man to Dan Aykroyd's straight man in Dragnet. I know many agree with me when I say I hope we get at least one more silly Hanks before it's all over. I also miss Chris Tucker. According to the almighty Wikipedia, he's now a devout Christian (which is totally fine) and he won't be using profanity any more, but that motherfucker is funny, and I hope we get some more silly Tucker.

Getting back to our innate voyeurism, both films' explorations of the subject are honest and almost too perfect. In The 'Burbs, we have the new neighbors, the Klopeks. They're quiet, creepy, weird-looking, and drive their trash to the end of the driveway in the middle of the night. They're different. When they speak, they sound different than everyone else on the block. Surrounding the Klopeks we have upper-middle class white Americans that like their simple and perfect existences. But what if, instead, the Klopeks were the Joneses from Friday? Mr. and Mrs. Jones wanted to move their family to a safe neighborhood, and they just happened to move next door to Ray and Carol Peterson. Even though the Joneses are a completely “normal” family, they'd still be “different” enough to attract the voyeuristic eyes of everyone else in that cul-de-sac. This is what Joe Dante is throwing in our faces: as white Americans, anyone “different” than us seems to be the wrench in our cog factory. And it shouldn't be that way, obviously. Now, Dante is a great director and he's able to twist and bend the story to make it hysterical and enjoyable. But therein lies the danger of our obsession with voyeurism. 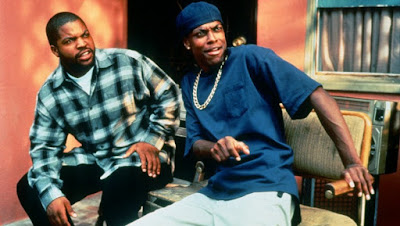 Both of these films document real life for most Americans. The 'Burbs takes it to another level, sure, but the underlying theme of the movie resonates like crazy. The late '80s and mid '90s seem like a world away at this point, but these are two timeless movies. They ask the question, “What's interesting about your neighborhood?” The answer is “Tons!” My dad taught me about people watching. His dad taught him. And I'll teach it to my sons. So the question we have to ask ourselves is, “How far are you willing to go to find what's interesting? Are you willing to break into your neighbor's house and dig up their basement? Or are you willing to just sit back, don't meddle, and watch what happens?” I know the correct answer is the latter, but I have some crazy-ass backyard neighbors, and I really want to know what they're hiding in that big tent they just put up.
Posted by Patrick Bromley at 12:00 PM