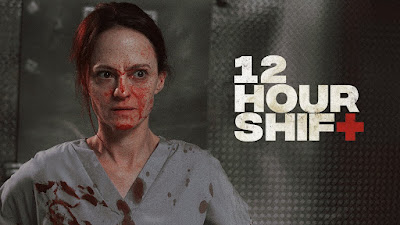 The only thing better than a movie starring Brea Grant is a movie directed by Brea Grant.

12 Hour Shift, written and directed by indie horror mainstay Brea Grant, is a dark comedy in the best Coen Brothers tradition. It sets up a bunch of colorful characters, some smarter than others, then puts them in seemingly impossible and often bloody situations that just get progressively worse until it seems like the only way out is more violence. It's twisted and it's tense and it's funny and it's my favorite movie of Fantasia Fest 2020 so far. 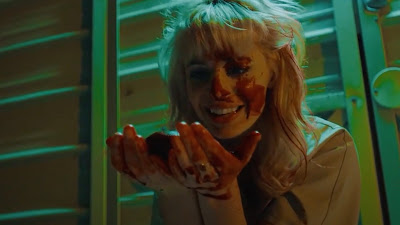 In a welcome return to form, Angela Bettis plays Mandy, a drug-addicted nurse in an Arkansas hospital. Mandy is involved in an organ harvesting scam, removing vital organs from recently deceased patients (she even sometimes assists with the "deceased" part) and selling them to local criminal Nicholas (Mick Foley), using her dim-witted cousin Regina (Chloe Farnworth) as the go-between. When Regina misplaces a kidney meant to be delivered, it sets off a chain reaction of events that involve more mayhem and murder for both the staff and the patients of the hospital.

Funny and twisted with a healthy dose of irony, 12 Hour Shift understands black comedy in a way that many other recent attempts haven't -- for proof, look no further than the "Wise Up" inspired musical number that accompanies scenes of organs being cut out of bodies. Most of the characters in 12 Hour Shift are terrible people, and the ones who are supposedly "good" are bad in different ways (except for Derrick the dancing EMT; he is pure light and rainbows). That doesn't make them unworthy of our emotional investment, as both Grant's screenplay and Bettis' performance ensure that we care about what happens to Mandy, even if she is a fuckup. As an addict, she's not necessarily responsible for all of her choices -- though she's still responsible for plenty of them, particularly those involving murder. Bettis, so known to horror fans for playing misfits and weirdos (May, Carrie White, Sick Girl), gets to play one of the most "normal" characters she's played in years -- she's the black heart at the center of a body that's rotten. I love the whole cast of characters Grant and the actors create, all expertly established before the shit really starts piling up and everyone must react according to their natures. It's how drama is supposed to work but so rarely does this well. 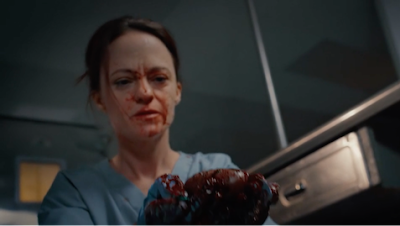 I've always loved Brea Grant as an actor, and I liked her directorial debut Best Friends Forever for the promise it showed, but 12 Hour Shift is a huge leap forward. I love the way the camera moves around the (mostly) single location set, never claustrophobic except when it wants to be because a character can't seem to get away from people or steal a moment alone. I love the way the insanity continues to pile up, the screws continuing to turn until it seems impossible to find a way out. I love the cast of characters and the ensemble cast, ably led by Bettis, long one of my favorite actors on the indie genre scene. Her experience in the film represents that of a lot of women: constantly putting out fires and cleaning up messes with little acknowledgement or appreciation. Of course, in this case, it's a mess that's at least somewhat of her own making, created by her own crimes and bad choices. I love that 12 Hour Shift never apologizes for it. The best black comedies never do. This is a terrific movie about bad people doing worse things.
Posted by Patrick Bromley at 4:00 PM