Review: I USED TO GO HERE 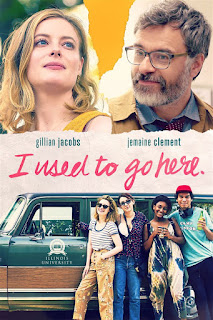 On coming of age in your mid-thirties.

The nice thing about youth is all the forward momentum. We’re invincible. Unmarred. Assuming the best of circumstances, our young lives are blank slates waiting for etching. Or chalk. Or watercolor. Crayons? Look, I’m not an artist. But that’s the beauty of it, right? It’s supposed to be messy. Our colors are bright, our pencils are sharp, and one day, if we believe in ourselves enough, we MIGHT become artists. Great! But then what? We don’t just become something and then maintain a static existence in that state, after all. Accountants have to keep accounting. Doctors have to keep doctoring. Artists have to keep arting (again, not my field). In Kate Conklin’s (Gillian Jacobs) case, a writer has to keep writing. Trouble is, it’s not going well. Her newest novel — a trite, obvious romance — is dead on arrival. The reviews are scathing. The book tour is cancelled. So is her engagement. Posing for a photo next to three pregnant friends, Kate is starting to look around for a fresh slate. 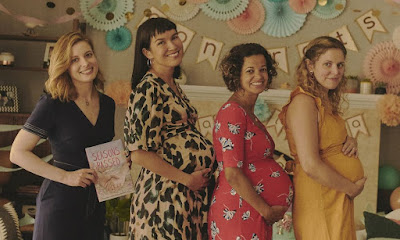 Thankfully, she’s about to get a timely invitation from her favorite writing professor (Jermaine Clement as David) to speak at her alma mater. That reading engagement leads to a job offer, and suddenly, everything's coming up Conklin. She reconnects with the greying David, who’s as charming as he was back when she had a crush on him. She stops by her old house, the one on the street that still smells like weed. It’s still teeming with co-eds (Hannah Marks, Josh Wiggins, Brandon Daley, et al), but these kids know Kate only as the three-time published novelist from Chicago. They think she’s pretty cool; a little old to be at a college party, sure, but cool enough to hang. Before long, it starts to feel like being back on this campus is exactly what Kate needed. Maybe a fiancé, babies, more publishing, and a life in a big city weren’t the right moves. But what if college life isn’t the security blanket she thought it was? What if it’s just as complicated, messy, and frustrating as everything else in the last fifteen years?

With I Used to Go Here, writer/director Kris Rey (Empire Builder, Unexpected) is telling the story we all need to hear at one point or another: Life is full of stops and starts. Every now and then, we’re going to make bad choices and invest in failing endeavors. We’re going to spoil our potential and compromise our integrity. Sometimes, the best thing we can do is reset, refocus, and look for a new perspective. It’s not an earth-shattering story, nor is it especially well told, but what really works in I Used to Go Here is Rey’s unwillingness to paint any of these characters as inherently good or bad. It’s all nuanced. It’s all an experience. Yes, young April’s insistence that she can self-publish her work sounds naive to someone who’s weathered the hellscape of agents and editors. Yes, her affair with the much-older David is even more ill-advised and toxic than the one Kate herself tried to start back in the day. But Kate knows that mistakes are part of the deal. Recklessness is a byproduct of creativity, and April will figure it out.

As will Hugo (Wiggins). As will Animal (Forrest Goodluck). As will Tall Brandon (Daley). While the bulk of I Used to Go Here focuses on Kate’s experiences with young characters who aren’t particularly fleshed-out or interesting, these regressions provide Kate with a wider-angle lens on her own past and the reassurance that she’s not alone. I Used to Go Here is sweet in that way. It’s light and winning and reminds us that it’s okay to take a time-out when we need one. It’s okay to swim in your skivvies if you forgot a bathing suit. It’s okay to interrupt a couple mid-coitus because you needed to plug in your phone so you could stalk your ex on social media. It’s okay to sleep with a way younger guy and then offer a tepid apology to his more age-appropriate girlfriend the next day. Well no, that one’s bad, but the point is that everyone understands heartbreak. Everyone understands loss. Everyone knows what it feels like to be lost. Remember all that stuff about compromising our integrity? That’s how we grow. 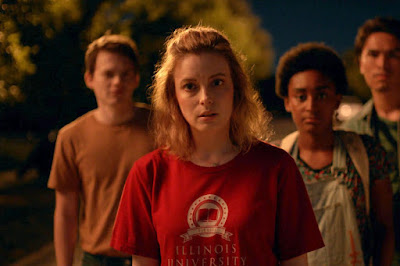 That growth is what makes Jacobs’ years playing Britta Perry, one of Community’s many resident underachievers, feel like prerequisites for making Kate work as a character. She doesn’t have many grand moments or philosophical epiphanies (“The personal essay is dead,” she laments to a friend), but that’s by design. She’s had them already. She’s learned. She tells us that real life is a lot more restrained than what we see in movies, books, and TV. It’s a lot of quiet. It’s a lot of wait-and-see. It just took her some time to realize that all that is actually good news. Even at thirty-five, not all is lost. Maybe Kate is a bad novelist. Maybe she’d be a bad professor. Marriage may be a few years off, too. But a short return to academic adolescence reminds her just how much progress she has made. She’s ready to stop texting her ex. She’s ready to help her pregnant friend through a painful delivery. She’s ready to wake up in time for breakfast. It’s as good a start as any.
Posted by Patrick Bromley at 5:00 AM