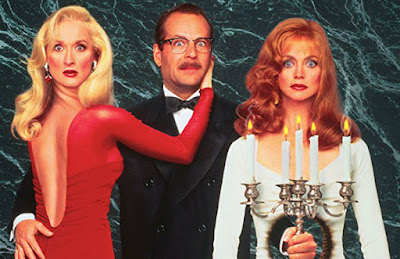 We’re allowed some pink drop potion. It’ll calm us down.

Adam: Welcome back to Summer ‘92 Redux, our revisit of the Summer 1992 movie season. This week, we’re discussing the Robert Zemeckis black comedy Death Becomes Her, starring Meryl Streep, Bruce Willis, Goldie Hawn, and Isabella Rossellini. Streep plays Broadway actress Madeline Ashton, who’s vain about her age and has a habit of stealing suitors away from her high school rival Helen Sharp (Goldie Hawn). One of those men is Dr. Ernest Menville (Bruce Willis), a plastic surgeon who enters an unhappy marriage with Madeline. Plotting her revenge, Helen returns to meddle with Madeline and Ernest’s lives which in part drives Madeline to Lisle von Rhoman (Isabella Rossellini) who offers her a potion promising eternal life and youthful appearance. Helen has also taken that potion unbeknownst to Madeline and the two square off once again with Ernest manically stuck in the middle of the two women.

Death Becomes Her is a movie I saw in theaters back in 1992 and thought was fine. I remember getting into a minor argument with someone in my family the day we saw the movie and it gives me almost a pain in my stomach thinking about it for some reason. I was surprised that this feeling lasts to this day. I was wracked with guilt the entire time I re-watched this on HBO last weekend. That aside, this is not one of my favorite Robert Zemeckis movies overall. In something like Used Cars, Zemeckis is so good at dialing up the energy and silliness, which he tries to do for the pitch of Death Becomes Her, but for some reason it just doesn’t work as well here as in Used Cars for me. The movie is slow getting out of the gate and the audience really doesn’t know a whole lot about Madeline, Helen, and Ernest until much later in the movie. Even then, a character like Helen is pretty underdeveloped. I think the movie gets better as it enters the third act and focuses on Bruce Willis’ character because it more thoughtfully reckons with the consequences of taking a potion that gives you everlasting life. It’s a weird movie from a director who has a lot of weird movies (and quite a few great ones). It ends just as it starts getting good and I wish we could have a re-do and eliminate much of the farce that takes up the first two acts. It’s been said by some that the movie feels like an extended Tales from the Crypt episode and I can see that (Zemeckis was a producer on the show, which was running at the same time as this film’s release), but unlike the show I don’t think it really gets in full gear as a horror-comedy hybrid. It seems like an R-rated movie handcuffed by a PG-13 rating.

What do you think of Death Becomes Her? Do you have a favorite performance of the three leads? 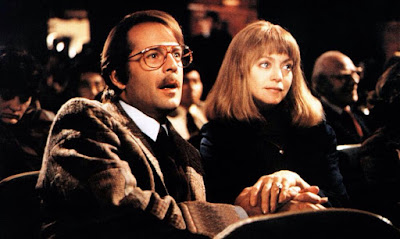 Patrick: I’ve always been a fan of Death Becomes Her. I like Robert Zemeckis in “zany” mode (the aforementioned Used Cars, I Wanna Hold Your Hand, his screenplay for 1941), and here he gets to scratch that itch and combine it with his love for cutting-edge visual effects. I totally agree that the movie takes too long to start exploring its premise -- it seems like all of the marketing was built around the end of the second act -- but I enjoy the earlier stuff, too. I think I saw someone recently refer to it as “All About Eve meets Tales from the Crypt,” which is a pretty good descriptor and a movie I would gladly see in a heartbeat. Its targets are pretty easy -- actors, vanity, etc. -- but I’ve never minded that the movie keeps things pretty simple because I think there’s enough dressing in the performances, in the effects, in the production design, in the photography to keep the energy up. It’s never felt like a movie straining to be “fun” the way so many movies attempting this level of wacky energy so often can.

It’s hard to pick a favorite performance in the movie because I enjoy the three leads so much, but I think I have to go with Meryl Streep. Like I said, she’s taking shots at an easy target, but she so rarely gets a chance to cut loose and be silly -- especially in 1992 (she’s had a few chances since) -- and it’s clear she’s really relishing the opportunity. The way she screams when Isabella Rossellini pokes her hand will never not make me laugh. It’s so over the top. Bruce Willis is really fun, too, cast completely against type. He’s gradual unraveling is very entertaining. Goldie Hawn is great in a part she could do in her sleep, but I’ll take this over Housesitter any day. Sydney Pollack is in the running, too. I love when he shows up in anything. Who gives your favorite performance?

Adam: I really like Willis in this for the reasons you already said and Pollack’s moment where he checks Meryl Streep’s heart rate and then immediately throws the stethoscope in the trash is really funny. I’m a big fan of Isabella Rossellini in this movie. It might just be a case of perfect casting but there’s something larger than life about her on-screen normally so having her vamp it up as an immortal temptress is very fitting. She seems to be having fun and comes along at just the right time in the movie and injects it with energy.

Patrick: I miss the Robert Zemeckis that would do weird little exercises like this, because within just a few years he became the “prestige” director whose every movie was an important event. I still like a lot of those movies, but I miss the fun Zemeckis. This was really his last appearance, which makes Death Becomes Her all the more special. 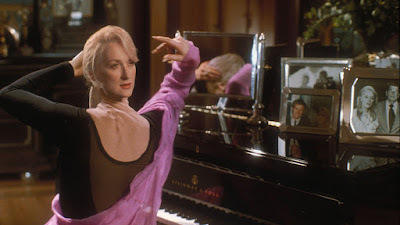 Adam: That’s a good point. I applaud him for trying to continuously grow throughout his career even if it’s led him to some dead ends. After his prestige stage, he had that weird detour into motion capture animation that never quite worked (but produced some fascinating movies in their own right) and then he’s now in this anything goes period which can also be construed as spiraling. I do like Flight a lot and I’m looking forward to eventually seeing his remake of The Witches with Anne Hathaway. He’s difficult to peg today in terms of what he’s trying to do, although he seems more interested in directorial exercises to challenge himself than telling engaging stories at this point.

Random question: Do you think Zemeckis would be considered one of the best directors of all-time if he made fewer movies? Sometimes I think directors like him, or Francis Ford Coppola, get a bit taken for granted because they made so many movies of varying quality that it ends up diluting their overall filmography. I’m trying to make sense in my head why the director of Back to the Future, Who Framed Roger Rabbit, and Cast Away is about as exciting to me as someone like Joe Johnston.

Adam: I like both Johnston and Zemeckis. I’m just not usually excited about a Zemeckis movie and it’s weird considering all he’s achieved.

Patrick: You raise a really good question, but it’s not one I’m able to answer. I tend to think of filmmakers in terms of their highest achievements, so I remember Robert Zemeckis for all of his great movies and rarely think of Allied or Beowulf or anything like that, just like I rarely think about Jack or One From the Heart (neither of which I’ve ever seen) when I have so many other classic Coppola movies to choose from. You’re right that some filmmakers never misstep by virtue of making fewer movies, but even the ones with huge filmographies are, for me, defined by the best efforts. Steven Spielberg is the guy who gave us Jaws and E.T. and Raiders of the Lost Ark and Schindler’s List and Jurassic Park, not the guy who gave us Hook even though he also made Hook. I don’t think I’m explaining myself very well.

I don’t think I would call Death Becomes Her as one of Robert Zemeckis’s best movies, but I’m happy to put it in that “B” category alongside Used Cars and Romancing the Stone. I like its nasty streak and the anarchic quality it gradually builds up. It’s clear that he set out to make a very specific kind of movie and I think he succeeds, but I also get if that kind of movie is not for you. Since he’s not a director you’re totally into (it sounds like), what would your top 3 or 4 Zemeckis movies be?

Adam: Back to the Future is my favorite. It’s a perfect movie. After that it would be Cast Away, which I just watched again earlier this year and still absolutely love. Then it gets a little murkier. I’ve never seen Romancing the Stone and I know I should. I think my third favorite is Used Cars. I need to re-watch Who Framed Roger Rabbit and Forrest Gump again. It’s been awhile (been awhile). Other ones I like are Back to the Future Part III, What Lies Beneath, The Polar Express, and Flight. Sorry I tore apart Death Becomes Her and Robert Zemeckis. I didn’t even mean to, but I guess that’s what happened. 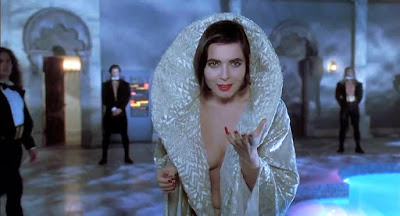 Also released this week in 1992 was Buffy the Vampire Slayer and Bebe’s Kids. I re-watched both. Buffy has grown on me over the years and I like it more now than I did back in 1992 even though it’s tough supporting (?) a few of its participants in 2020. It’s a great premise. I’ve seen Bebe’s Kids about ten times and really like it. Other than The Princess and the Frog, I can’t think of too many African-American led mainstream animated films and that’s too bad. Because of that and it being a movie based on a stand-up comedy routine (by the late Robin Harris), it feels entirely original. Plus, it’s 72 minutes! I didn’t know until my most recent viewing last week that Faizon Love voices Robin Harris in the movie. I always thought it was Robin Harris and he had just recorded his voiceover prior to his passing. Faizon Love does a great job.

Patrick: I’ve never seen Bebe’s Kids, but I remember seeing the trailer a lot in 1992. I saw Buffy the same day I saw Death Becomes Her (did a double feature of them both opening day, obviously emboldened by my Mo’ Money experience) and was crazy excited to see it because I thought it was such an inspired concept. The movie has never lived up to the idea for me -- I still think it’s just ok -- so I’m glad they decided to explore it further on the show, which remains one of my favorite TV shows of all time. Of the two, I’ve always preferred Death Becomes Her but I’m guessing you don’t agree?

Adam: I’m more of a Buffy the Vampire Slayer fan than Death Becomes Her, but it’s the difference between a 3 out of 4-star movie (probably 2.5 rounded up) and a 2 out 4- star movie for me. I like how sincere Buffy is despite its over-the-top premise. I recognize Death Becomes Her is better made and more ambitious, but it’s not my personal preference. What do you want to revisit next week? Unforgiven? Raising Cain? 3 Ninjas? Whispers in the Dark?

Patrick: Oh, boy. So many choices! I feel like my head says Unforgiven because it’s the one that “matters” from this summer, but my heart says Raising Cain. Which one would you rather do?

Adam: Both! See you next time.
Posted by Patrick Bromley at 5:00 AM