I laughed… until I stopped.

The fine folks at Kino Lorber have dropped a big early package of Halloween goodness on our doorsteps with their Blu-ray release last week of Bob Hope’s first two starring features: The Cat and the Canary from 1939 and The Ghost Breakers from 1940.

The Cat and the Canary is one more reminder that 1939 was the greatest year in the history of motion pictures. In no particular order, 1939 saw the release of The Wizard of Oz, Stagecoach, Ninotchka, Wuthering Heights, The Roaring Twenties, The Rules of the Game, The Hunchback of Notre Dame, Destry Rides Again, Of Mice and Men, Only Angels Have Wings, Son of Frankenstein, Gunga Din, Young Mr. Lincoln, The Four Feathers, The Adventures of Sherlock Holmes, Drums Along the Mohawk, Beau Geste, You Can’t Cheat an Honest Man, and Mr. Smith Goes to Washington. 1939 reminds us of the immortal words of Frank Capra, writing in his autobiography The Name Above the Title, “Don’t make your best picture the same year some other guy makes Gone with the Wind.” 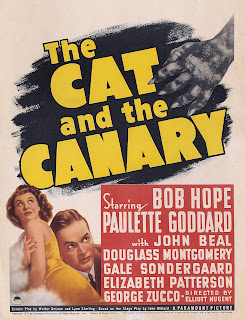 The Plot in Brief: A disparate group gather at a creepy New Orleans mansion for the reading of Cyrus Norman’s will. Radio personality Wally Campbell (Bob Hope), sweet artist Joyce Norman (Paulette Godard) and a bunch of other folks who don’t stand a ghost of a chance of inheriting the fortune try to survive a night at Spook Central. Is there a maniac on the loose or is someone just trying to bilk the rightful heir out of untold riches.

I am rightfully obsessed by this story, the third screen adaptation of John Willard’s Broadway smash, The Cat and the Canary. (The first sound version was titled The Cat Creeps and today it is considered a lost film.) A few years before I retired, I directed a high school production of the Broadway play; it was a highlight of my career. My technical director built us a big, spooky mansion for us to play around in. My assistant director went above and beyond and assembled costumes and make-up that were just this side of parody. Every character was a cartoon, but not quite. My cast was comprised of truly nice kids who worked their tails off resurrecting a classic bit of stagecraft that happened to be so old that it farted dust. This play involves difficult stagecraft, difficult blocking, and difficult memorization, but they handled it like pros. 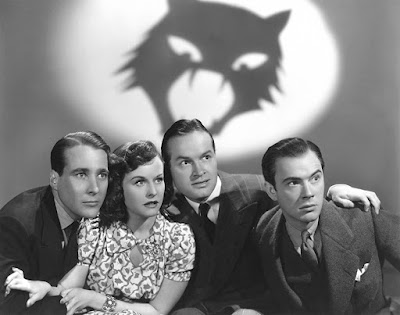 One of my pet peeves in the realm of high-school dramatics are directors who cut shows to ribbons under the dubious pretext that modern audiences can no longer sit through anything longer than 90 minutes. I have even seen “streamlined” musicals that cut whole songs and plot points the director deems nonessential! Now, I don’t want to get into the legality of this. (I always assumed that when you contract with Samuel French, you’re agreeing to do the entire show as written.) I am proud that we presented the original 1922 Cat and the Canary in its entirety… and it alternately amused and frightened our audiences every night. There is a moment at the end of the second act, which I will not spoil, that honestly knocked the audience on its collective ass. What fun to scare strangers! One of the nicest compliments I have ever received was from an older staff member who made it a habit to see all the shows at my school. The morning after she saw my production of Cat and the Canary, she took me aside in the hallway to express how much she had enjoyed it. “It was like A REAL PLAY,” she whispered. Well, I thought, it doesn’t get much better than that.

Whoever it was at Paramount who figured this old haunted house chestnut would be a great vehicle for Hope deserved a raise. Hope’s comic persona throughout the forties and fifties was the brave coward always ready with a light-hearted quip. This film comes across as ahead of its time and the template for all the scare comedies that were popular for the next three decades. I mean, Cat and the Canary was made a full nine years before Abbott & Costello Meet Frankenstein, which is now considered one of the best scare comedies ever made. One of the reasons Universal made that film was that the team’s Hold That Ghost, released in 1941, made oodles of cash. Hold That Ghost is clearly beholden to Cat and the Canary. Look, no one loves Abbott & Costello as much as me (and I know it is not fashionable anymore to sing Bob Hope’s praises, given the Right-Wing Hawk/Sleepwalking Comedy Special Host/Annoying “Surprise” Talk Show Guest he became late in his career.) but credit is due here. Cat and the Canary is just so much fun… … and made so much money that Paramount all but remade it the following year by re-teaming Hope and Paulette Godard in The Ghost Breakers, which only suffers because it is such a carbon copy of the previous year’s comic scare fest. Thumbing through online reviews of the two new discs, I was surprised to find that many critics prefer the second film over the first. Hmmmmm. There’s no accounting for taste. I prefer the original; perhaps I’m biased because of my love for the Cat and the Canary’s source material? 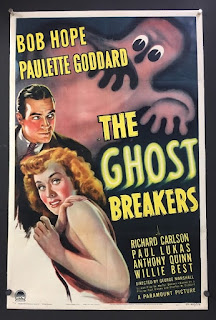 The Plot in Brief: New York experiences a terrific thunderstorm that puts out all the lights. Mary Carter (Paulette Godard) learns she has inherited a mansion and plantation in Cuba. She plans to set sail that night to claim her inheritance. Meanwhile, radio personality Lawrence Lawrence (Bob Hope) has run afoul of some mobsters and wishes to get out of town. Through a series of accidents and mistakes, Lawrence believes he accidently killed someone and stows away aboard Carter’s boat in her steamer trunk. Once in Cuba, the flirty pair are beset by helpful strangers, imposing zombies, and violent con men. Are the ghosts real? Are the zombies? Or did someone see The Cat and the Canary the previous year and is trying to bilk Paulette Godard out of her rightful property (again)?

The cinematographer here is the star: Charles Lang photographed Cat and the Canary and Ghost Breakers. His resume includes over 150 films in a career that spanned almost 50 years.: The Uninvited, The Ghost and Mrs. Muir, Ace in the Hole, Some Like It Hot, The Magnificent Seven, One-Eyed Jacks, Charade, and Bob and Carol and Ted and Alice are among the classics he lensed. Both films look great—sharp and clear enough for the jokes to land, but dark and mysterious enough for the spooky stuff. It’s a delicate balancing act, but Lang pulls it off with aplomb. These two movies look gorgeous. 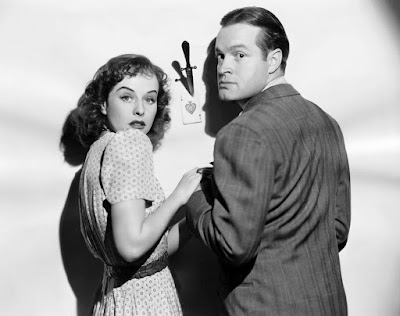 Lee Gambin’s commentary tracks continue to impress me. I was a big fan of his recent track on Godspell and really looked forward to hearing his talks here. Gambin does not disappoint: brisky, informative, “chummy,” inside, and thorough. When you’re done with the commentary, it’s like you’ve read two sizeable books on the films’ productions. Bravo.

Both films feature a monster, making them ideal Scary Movie Month fare. Cat and the Canary presents a strange, hunched-over, psycho-pathic brute and The Ghost Breakers presents an imposing, homicidal, giant zombie guy. I have it on good authority that both make-ups were the work of Charlie Gemora, legendary Hollywood “gorilla guy,” who I mentioned a few weeks ago in my column on the original War of the Worlds, in which Gemora played the one Martian we get a good look at. Gemora, you may remember, played a gorilla in scores of films over thirty years. Forget “Six Degrees of Kevin Bacon,” I’m in the mood for a rousing game of “Six Degrees of Charlie Gemora.”
Posted by Patrick Bromley at 5:00 AM

Email ThisBlogThis!Share to TwitterShare to FacebookShare to Pinterest
Labels: bob hope, movies is good, the cat and the canary, the ghost breakers