One Moment on a New Stage: Wes Craven’s MUSIC OF THE HEART 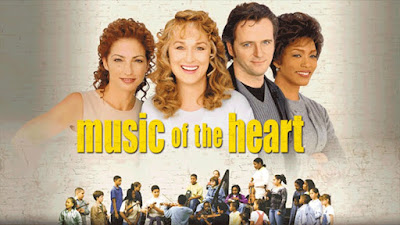 I recently tried a little experiment. I decided to watch the entire filmography of a filmmaker I love in order from beginning to end to see how they developed as a director over time.

The director I chose had been an idol of mine for decades—Wes Craven. Over the course of a few weeks, I watched everything he ever directed from Last House on the Left to Scream 4 including TV movies and episodes of The Twilight Zone, The Wonderful World of Disney, and Nightmare Café. Though I had seen most of his movies already, there were several surprises along the way. One of the biggest was a film I had seen years ago, but written off as a good, though lesser, movie in his filmography. I never expected Music of the Heart, his one big shot at the mainstream outside of the horror genre, to move me quite so deeply.

After the massive success of Scream in 1996, Craven was given the opportunity to make any property owned by Miramax at the time. When shown a list of possibilities, he immediately gravitated to a documentary the studio had distributed about a violin teacher at several East Harlem elementary schools called Small Wonders (1995). The film had been a modest hit for a documentary feature and Craven was drawn to several themes found throughout his body of work as well as the opportunity to make a film that dealt with his passions for classical music and education. 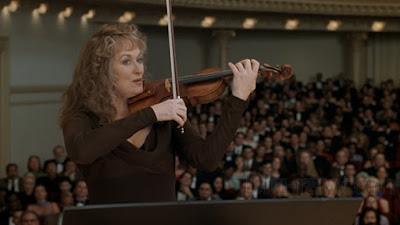 When Music of the Heart was released in 1999, I was in the final stretch of earning my Bachelor of Music Education degree and the film was marketed directly to music teachers and students. Seeing Craven’s name on the project both excited and bewildered me. Two years earlier, I had taken a girlfriend to see Scream 2 and she still hadn’t forgiven me for it. Here was the Master of Horror making what appeared to be Mr. Holland’s Opus (a film that music education majors at the time found to be, well, problematic in some ways), Part Two. I saw Music of the Heart in theaters and enjoyed it. A couple years later, I bought a used copy of the DVD from a local video store, and more or less forgot about it.

Now, more than twenty years later, I am a music teacher with several years of experience under my belt. In those years I have worked with multiple ages in several facets of music education including general music, choir, and recently assisting with an elementary strings program. Now, I am an elementary school general music teacher separated from traditional classroom teaching by a pandemic and I miss my students. All these factors worked together to make this viewing a profoundly emotional one; something I in no way anticipated.

The film begins with Meryl Streep as Roberta Guaspari, recently divorced with two young sons, moving in with her mother, wonderfully played by Cloris Leachman in a rare dramatic role. Roberta is an emotional wreck just trying to pull her life together when she meets an old friend, Brian (Aidan Quinn) who, over a conversation about Roberta’s musical talent and teaching career, encourages her to meet with a friend of his, Janet Williams (Angela Bassett), who runs an alternative public school in East Harlem. Roberta convinces Janet to hire her as a substitute and start a violin program in the school. The first half of the film is her struggles, personally and professionally, in her new community, school, and domestic situation and her ultimate success in starting the program. The second half jumps to ten years later and her fight to save the program from budget cuts by the school board, which leads her and the children to performing in a benefit concert in Carnegie Hall alongside violin greats such as Isaac Stern and Itzhak Perlman. 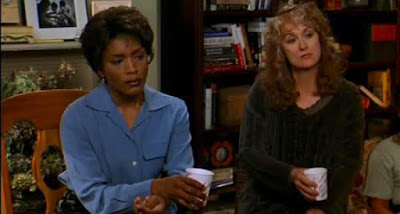 But that is just plot. What makes the film truly wonderful is the people that inhabit it. There is an authenticity to everything here, that, though some elements were embellished, makes it an inhabitable world for the two-hour runtime. When the film came out, there was some criticism for the dramatic license taken by the film. There were no conversations about “dead white men’s music,” few of the students at the East Harlem alternative schools in the film were as impoverished as the film suggests, and a student was not killed in a drive-by shooting. But I feel these criticisms miss the larger picture. Movies based on true events always stretch the truth for dramatic purposes. Craven had always been interested in racial and socio-economic disparities in his films, so it is not surprising that he would want to include these elements. In depicting some of the difficulties that students, families, teachers, and administration face, the film speaks to a broad section of society. I work in the suburbs and much of what is dealt with in the film is dealt with even in my supposedly affluent school and district. Problems of weapons and drugs being brought to school, abusive situations, and, of course, broken homes are issues everywhere, not just the inner city. It is not a stretch to say that school is a refuge for many children, and the arts, including music, are a safe space of much needed creative expression.

Several details of the film are 100% true. For example, Guaspari was an itinerant teacher working in several schools. She would carry multiple instruments plus music and resources from building to under-equipped and under-funded building. The business of putting an old parking ticket under her windshield wiper in attempt to avoid another ticket was also a regular practice for her.

What I like most about the film is the fact that Streep’s Roberta Guaspari feels like a real teacher. In fact, I would go so far as to say that her performance is the most realistic depiction of a music teacher, or maybe even any teacher, ever filmed. So often, teachers in movies are portrayed as great saviors or they start out terrible and become “Superteacher” by the second act. Not so here. Roberta makes mistake after mistake throughout the course of the film. She’s not a very good classroom manager (this can also be seen in the documentary), sometimes she yells, and often says and does awkward things. But I cannot name a teacher, including myself, who doesn’t sometimes say or do something they regret in the moment. The key is trying to get better. In one scene, Roberta is demonstrating how students should stand when playing and casually pushes a girl, Guadalupe, who stumbles. It was not meant to be malicious; she was trying to use a little humor to make a point. Then, when adjusting Guadalupe’s feet, Roberta discovers braces on her legs. Roberta is clearly embarrassed, but rather than drawing attention to it, she asks for a chair. Later, in what has the potential to be a sentimental and corny scene, she tells Guadalupe about Itzhak Perlman, one of the greatest violinists of all time, who also happens to walk with two canes due to a childhood battle with polio. 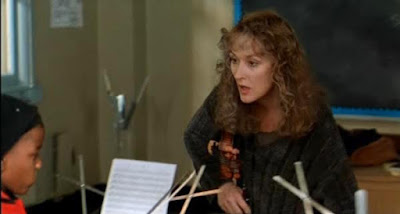 Scenes like this wouldn’t work in the hands of a less capable actress than Streep or a more sentimental director than Craven. The film is personal, but grounded. It rarely leans into the emotional elements in a pandering or manipulative way. Streep’s delivery of the dialogue is natural, even matter-of-fact. There are no stage whispers or false tears, only real and sometimes raw emotion. The supporting cast is very strong with everyone bringing their A-game to the film. From Craven veteran Angela Bassett to Aidan Quinn, film newcomer Gloria Estefan and child actors Michael Angarano and Kieran Culkin among others, performances range from very good to stellar. Craven had an ability to make his actors as passionate about a project as he was. His intellect, humor, and warmth routinely won over his sometimes skeptical casts and crews. Meryl Streep herself is a good example of this. She was convinced that she did not have enough time to prepare this character, and perhaps had reservations about the director’s ability to take on a film like this. But an eloquent, heartfelt, and passionate letter from Craven about the project changed her mind and the two worked together to yet another Oscar nomination for the actress.

The movie is not particularly well served by its title or its marketing campaign, both of which imply a much more precious and sentimental film than Music of the Heart actually is. Ironically, considering the film’s subject matter, the score doesn’t particularly work for me either, often falling into the trap of emotional manipulation that the acting and directing avoid. I admit that I scoffed at Craven’s name on this film when it came out, but frankly, in the hands of a more sentimental director and less capable actors, the film wouldn’t work. So, in many ways, Craven was the ideal director for this movie.

In the closing scene, after the triumphant finale at Carnegie Hall, Roberta is shown back in her tiny classroom in a huddle of kids, teaching them the parts of the violin. In this scene, Craven does something subtle, but incredibly effective. In an earlier scene, Roberta plays a single note on her violin while alone on the stage in the empty Carnegie Hall and revels in the resonance of the sound. Here, after describing to the children why horsehair is used for the violin bow, she plays that same note. But the sound used is not the dry screech that would be heard in a small classroom in East Harlem, but the reverberant echo of Carnegie Hall. It is a reminder that she will always carry that moment with her. It is also a reminder to us to put the same passion into the simple and mundane moments as the most significant ones. Craven loved horror and had worked his way from the independents to the big stage in that arena; he was ultimately very happy with his place in the history of the genre. Still, I’m glad he got this one chance to play on a different stage and I hope that the single note he played here will resonate through the years.
Posted by Patrick Bromley at 5:00 AM