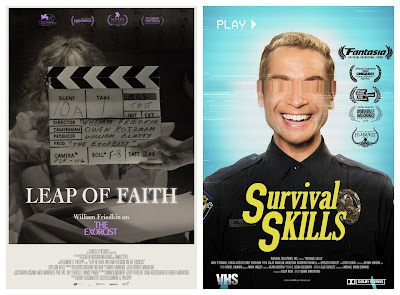 There’s nothing like a good tale well told. The best storytellers can make even the dullest topics more interesting, sure, but Alexander O. Phillipe’s Leap of Faith features the rare subject worthy of extended pontification by a noted raconteur like William Friedkin: The making of his 1973 masterpiece, The Exorcist. Interrupted only by the occasional film clips for nearly two hours, Friedkin waxes philosophical on topics such as art, cinema, religion, creativity, and the human condition. It’s not exactly a “making-of” story, in the strictest sense (though Friedkin does speak at length about The Exorcist’s casting, cinematography, themes, and soundtrack). Rather, it’s a look into how his humanity governs his filmmaking. Friedkin comes across as a deeply spiritual and introspective person, his ambivalence toward The Exorcist’s religious overtones notwithstanding. He’s also detail-oriented in the way the true auteurs always seem to be, able to recall specific lines of dialogue and lighting cues from his forty-five year-old film at a moment’s notice. As a result, Leap of Faith is a gold mine of insight for filmmakers and philosophers alike. 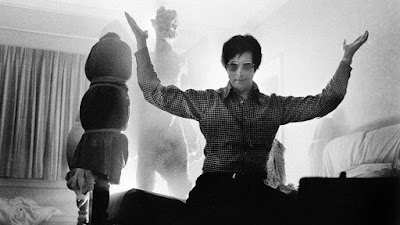 This isn’t to say that cinephiles looking for the inside skinny on The Exorcist will be disappointed. Friedkin talks with great relish about the day he threw Bernard Hermann out of his office after the legendary composer called his film “a piece of shit” and claimed that only his music could save it. That was just the beginning of the film’s scoring issues, apparently, as Friedkin also suffered a falling out with longtime friend Lalo Schiffren over his “disappointing” orchestral session. The Father Karras role was a problem, as well: Warner Brothers initially hired (and eventually paid off) Stacy Keach to play the tortured exorcist, and author William Peter Blatty even offered Friedkin his entire share of the film’s profits to play the part himself. Friedkin resisted, of course, eventually casting stage star and playwright Jason Miller. Friedkin goes on to discuss his inspiration for the film’s more iconic visual compositions, including the paintings of Caravaggio and René Magritte. And then lighting design. And then sound effects. And on and on. For as much as the director insists that The Exorcist was guided by celestial inspiration, it’s clear that his own impressive literacy played a significant role in its success.

Though not quite on the groundbreaking level of Lost Soul, Jodorowsky’s Dune, or Burden of Dreams, Leap of Faith deserves a spot among the notable “filmmakers on filmmaking” documentaries to emerge in the last few years. Director Alexandre O. Phillipe (78/52, The People vs. George Lucas) has the good sense to get out of his subject’s way for most of the running time, resisting the urge to crowd the film with an unnecessary B story or other talking heads whose insight would pale in comparison to Friedkin’s. More than anything else, Leap of Faith is notable in that it celebrates the production of a masterpiece that wasn’t fraught with constant drama and creative insecurity. I’ve always championed the power of “art through adversity,” the belief that since some of our greatest films — Back to the Future, Star Wars, Jaws, Citizen Kane, The Godfather, etc. — were disastrous productions, there must be some necessary correlation between that crucible and a project’s overall quality. It was true for those films, and it’ll be true for more, but maybe the guiding hand of a mad genius like William Friedkin is just as essential.

“People are just a nightmare,” insists a veteran cop (Ericka Kreutz) to her rookie partner. “A cradle-to-the-grave nightmare.” Framed as a comedic parody of 1980s police instructional videos (with VHS tracking problems and 1:33 aspect ratio to match), Quinn Armstrong’s Survival Skills seems to agree. Its gruff, imposing narrator (Stacy Keach, this week’s running theme) begins by introducing us to Jim Williams (Vayu O’Donnell). Jim’s a regular ol’ guy. Thirty years old. Two-bedroom in the suburbs. Doting girlfriend (Tyra Colar). It’s his first day on the local police force! Jim’s excited to Serve and Protect. He’s demonstrated bravery, honesty, and intuition, and now he’s ready to put those skills to work in his community. Our narrator guides Jim through a number of challenges: Speeding drivers. Stolen bikes. Stabbings. Domestic disputes. Some of these are tricky, huh, Jim? (Jim nods cheerily). Human behavior just doesn’t always seem to adhere to departmental guidelines, and the more our new recruit uses his academy training in the field, the more he finds that there are no perfect solutions to many of life’s problems. 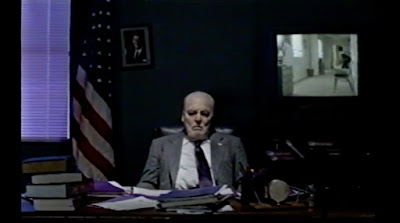 It’s not long before Jim is frustrated with the limitations of his training and his inability to do any real Good. Take his domestic violence case, for example: The victim has a young daughter and nowhere to live. She has no job and no money. Women’s shelters are underfunded, and her husband’s expensive lawyer has rigged the game against her. Her testifying in court will invariably lead to further abuse and even financial ruin. Jim wonders how the system could be this broken. He wonders why the Five Steps to a Peaceful Arrest aren’t working on the man currently stabbing him. He wonders why his partners mockingly call him “Robocop.” He wonders why no one at his church will help others who are truly in need. We soon learn that the titular Survival Skills aren’t the tools Jim uses to protect himself on the job; they’re the tools he uses to protect himself from the job. As Jim’s cheery disposition crumbles in the face of his disillusionment, the film evolves into a darkly hilarious and deeply unnerving commentary on the perils of public service.

But Survival Skills’ real miracle is that it actually uses its ‘80s aesthetics for thematic good. Many VHS-sploitation indies rely on period costumes or retro frame rates to trigger an audience’s nostalgia (which prevents them from questioning whether or not they’re actually needed), but director Quinn Armstrong uses the outdated technology to specifically emphasize Jim’s outdated education. Jim is a WASPy Reaganite with a Stepford wife who barely registers as human, while the citizens he serves are world-weary, dejected, and modern. The film milks this contrast for humor at every turn, at times clearly reveling in its sharp satirical bite. We’re never making fun of Jim, exactly, but we’re conscious of the danger inherent in his naivety. There’s even a meta-narrative arc, with Keach’s starchy narrator occasionally losing control over the video whenever his Model Officers are faced with real-world policing issues. Though Survival Skills has moments of pitch-black comedy, it’s also a disarming call for empathy, an indictment of uniforms, badges, and other organizational signifiers that strip us of our humanity and cause us to alienate those with whom we seek to connect.
Posted by Patrick Bromley at 5:00 AM