I’m guessing it was the goddamn COVID in some way, shape, or form that postponed these terrific new discs to AFTER Halloween. Still, let’s not cry over spilled pandemic vaccine, we should be thank-thank-thankful to Scream Factory for producing these discs at all. Let’s get to it. I’m going in. 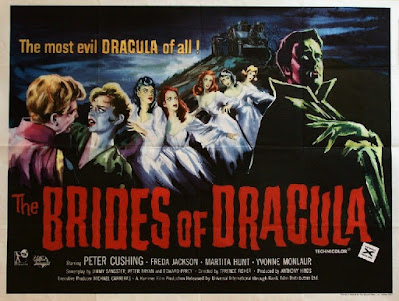 I had always held the fact that Christopher Lee does not appear in this one against it, but I am now prepared to offer an apology. This might be... my favorite Hammer vampire film (after Horror of Dracula, of course.) It’s so well done, as if Curse of Frankenstein and Horror of Dracula were dry runs for this film. From script to performances to set-pieces to direction, I give a big chef’s kiss to Brides of Dracula.

The Plot in Brief: Marianne Danielle (Yvonne Monlaur) is travelling to her new position, teaching at an all-girl’s school in the mountains when she is waylaid by a frightened coach driver, a town in panic, and a mysterious Baroness (Martita Hunt). The Baroness invites Marianne to stay at her castle, where she meets the handsome, haunted Baron Meister (David Peel) who just happens to be... chained to the wall. Marianne falls in love with him and helps him to unshackle himself. Big mistake.

In a coincidence familiar to fans of Hammer horror films, Dr. Van Helsing (Peter Cushing) has been summoned to the village to help solve a series of mysterious deaths. 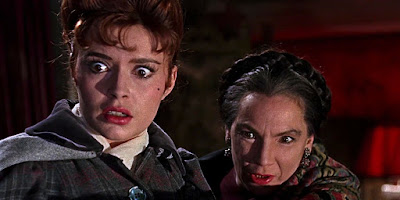 Van Helsing befriends Marianne and takes her to the school, finally. SPOILER ALERT: Baron Meister is a vampire, who intends to treat the all-girl’s school as a 24-hour Las Vegas buffet. He also intends to make Marianne (and a select few others) his wives, hence the title. Biting and staking ensue.

As much as I would like to spoil the ending of this film, I will not. I will say that screenwriters Jimmy Sangster, Peter Bryan, Edward Percy, and Anthony Hinds seem to be trying to out-do the excitement and cleverness of the “candlesticks and curtains” finale of Sangster’s previous film, Horror of Dracula. Thanks to a handy windmill and some “holy water in a drawer,” they just about succeed. 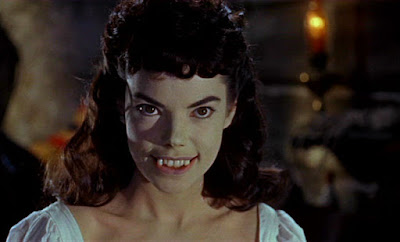 The transfer on the new Scream Factory Blu-ray is a new 2K scan of the interpositive. This film has always looked beautiful; I would argue that it is the best looking of all the Hammer films, and now it looks better. Never have Jack Asher’s painstaking cinematography, Bernard Robinson’s sets, Molly Arbuthnot’s costumes, and Roy Ashton’s make-up combined into such a jaw-dropping whole. The film is a visual feast.

Extras include an audio commentary with Steve Haberman and Constantin Nasr; featurettes: The Making of Brides of Dracula, The Haunted History of Oakley Court, Malcolm Williamson on the score, “The Men Who Made Hammer: Terrence Fisher,” and “The Men Who Made Hammer: Jack Asher.” The Terrence Fisher doc is particularly noteworthy, consisting of an hour-long reminiscence from Richard Klemenson, editor of Little Shop of Horrors magazine. It’s required viewing. 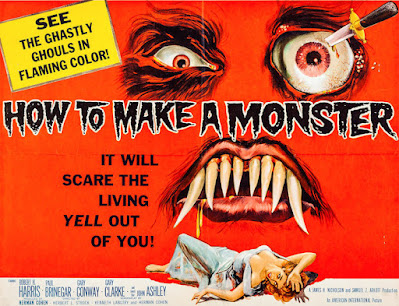 The Plots in Brief: Monster is the follow-up to the very successful AIP duo, I Was a Teenage Werewolf and I Was a Teenage Frankenstein. Pete Dumond (Robert Harris) is the resident make-up wizard at American International Pictures. It is clear that the popularity of AIP’s monster pictures is due in large part to Pete’s genius. Because their horror films have been so damn successful, the top brass at AIP decide to stop making them... and focus on musicals instead. Pete is given his notice, and so plots revenge on the studio. Pete blends strange chemicals into the actors’ make-up, which makes them slavishly follow Pete’s hypnotic orders to KILL. Biting and melting ensue.

Colossal Beast reveals that Colonel Glenn Manning (Dean Parkin) did not die when he fell into Hoover Damn at the conclusion of The Amazing Colossal Man. Glenn now has a scary, exposed skull, a lumbering gait, and has lost the ability to talk. Glenn stalks the Las Vegas dessert, grabbing bread trucks off the highway for food. He now roars like an amalgam of Godzilla and my father whenever he hit his thumb with a hammer. Glenn’s sister Joyce (Sally Fraser) shows up to find out what happened to her brother. Major Mark Baird (Roger Pace) thinks this is no place for a woman! Can anyone or anything get through to Glenn? I bet those high-tension power lines outside Griffith Observatory could get through to Glenn... Screaming and bussing ensue. 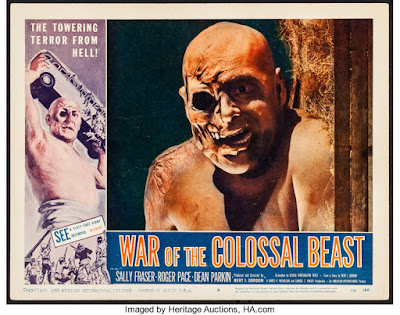 The transfer on Monster is a new 2K scan of a fine grain film element. The transfer on Beast is a new 2K film scan of a fine grain print. Both films have never looked better. Extras include two audio commentaries on Monster (The first with C. Courtney Joiner & David Del Valle and the second with Tom Weaver), a Herman Cohen career retrospective featurette, and a 45-minute Q & A with stars Gary Conway and Gary Clarke from the 2017 Monster Bash. Beast extras include a chummy audio commentary with C. Courtney Joiner, Eric Hoffman, and Don F. Glut (the latter two wrote for Famous Monsters of Filmland magazine in the Sixties and Seventies) and a Bert I. Gordon career retrospective featurette from Daniel Griffith’s Ballyhoo Productions.

Like I Was a Teenage Frankenstein before them, both How to Make a Monster and War of the Colossal Beast feature finales that are in color. The last 90 seconds of Beast and the last 11 minutes of Monster are in full color. On the discs’ respective audio commentaries, someone remembers an AIP producer saying that when audience members walked out of both films, they just might remember the entire film being in color! In Beast, the color footage comes across as a gimmick. Glenn grabs the power lines and Boom! Color! The color climax of Monster, though, is much longer and seems designed as an homage/rip-off of 1953’s House of Wax. I remember these color endings very fondly because, as I have mentioned in previous columns, my first exposure to these films was via sketchy Chicago UHF stations that one needed the fingers of a safecracker to tune into. If you got lucky, or the signal was strong that day, the picture was clear and sharp enough to actually show the color. Most times, it was a mess of black and white static, making you wonder if you had merely dreamed that the endings were in color. You know kids’ imaginations... right? 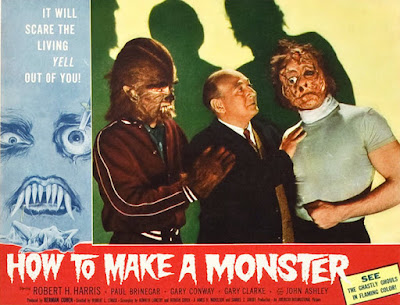 And why have the films that came before Monster and Beast, The Amazing Colossal Man, I Was a Teenage Werewolf and I Was a Teenage Frankenstein never been available on Blu-ray disc? Well, I will tell you... AIP co-founder James Nicholson was married to actress Susan (The Ghost in the Invisible Bikini) Hart for eight years. When he died, part of her inheritance was the rights to 12 of her late husband’s films (It Conquered the World; Zontar, the Thing from Venus; Invasion of the Saucer Men; The Eye Creatures; Terror in the Year 5000; Apache Woman; Oklahoma Woman; Naked Paradise; and The Eye Creatures are the other nine.) She has refused to license them for a legitimate disc releases, insisting that no company has ever offered her what she feels those three properties are worth.

Damnit. I’m glad she didn’t get the “Beach Party” films.

The bottom line here is that these discs are essential viewing; extend Scary Movie Month into November by purchasing and watching them. Like the Amazing Colossal Man himself, these discs are two-tons of fun. All three discs are being released TODAY.
Posted by Patrick Bromley at 5:00 AM

Email ThisBlogThis!Share to TwitterShare to FacebookShare to Pinterest
Labels: brides of dracula, hammer movies, how to make a monster, movies is good, scream factory, war of the colossal beast