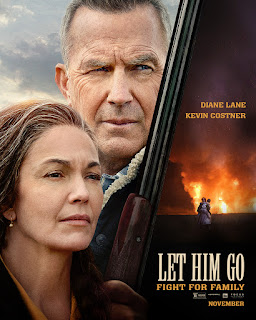 Ma and Pa Kent are back. With shotguns.

Despite its mid-century setting, Thomas Bezucha’s Let Him Go is a bit of a modern marvel: It’s an earnest drama for adults, a sweeping pastoral brimming with heart that avoids the Down-Home histrionics that often make the genre unbearable. Based on the novel by Larry Watson, it’s also literate without being too dense, layering in story through mood and tone whenever exposition would feel invasive or unnatural. The film is nearly silent for its first few minutes, in fact, yet its imagery is so provocative that we’re never left groping for details. It’s a simple tale, well told. Its eyes are exactly as big as its stomach. There’s something remarkable about that in this hellish Year of Our Vengeful Lord 2020, isn’t there? There’s something reassuring about seeing Kevin Costner and Diane Lane holding hands and kicking ass up on our big silver screens. I think there is. I think it feels good. And so, while Let Him Go likely won’t garner enough mainstream attention for Oscar buzz, it’s proof that Americana still works if it’s played with grace and integrity. 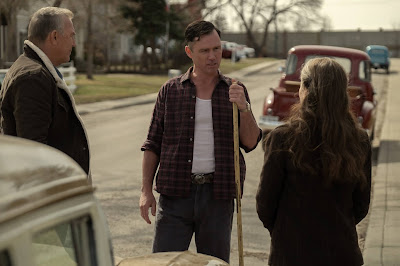 The year is 1963. Lane and Costner are Margaret and George Blackledge, a retired Montana couple still mourning the death of their son, James (Ryan Bruce), who himself left behind a young wife (Kayli Carter as Lorna) and son (Bram and Otto Hornung as Jimmy). Left alone in an era (era) inhospitable to unwed mothers, Lorna has decided to take up with the aptly-named Donnie Weboy (Will Britain), son of a notorious clan of North Dakota reprobates. The Blackledges are resigned to this necessity until, one morning, the newlyweds vanish without a word. Margaret knows that her son is gone. She knows that, despite their familial bond, what Lorna does isn’t any of her business. Mothers will be mothers, however, and Margaret soon recruits George for an investigatory road trip to the Weboy compound, where they find Lorna and Jimmy the prisoners of ruthless matriarch Blanche (Lesley Manville) and her smattering of Large Adult Sons. This will not stand, the Blackledges decide. It just will not stand.

Spoilers: It does not. The Blackledges are focused, united, and relentless. Costner carries his decades as America’s moral center right into his portrayal of George, the former lawman willing to risk life — and, in an unexpectedly awesome bit of violence — limb to bring his grieving wife some inner peace. It’s an appropriately understated performance with enormous deference to the passionate and resolute Lane, who continues to prove that only a worthwhile screenplay can fully encapsulate her godlike luminescence. Though Margaret teeters on the edge of reason, no parent would begrudge her a shot at righting what once went wrong. Love and loss permeate throughout her story, after all. They are inextricably connected; death is the price we pay for a meaningful life. But that doesn’t mean we go down without a fight. That doesn’t mean we let domineering trailer trash like Blanche Weboy corrupt the Blackledge legacy out of fear of losing her own sons. Margaret will go beyond what is rational to do what she feels is necessary. 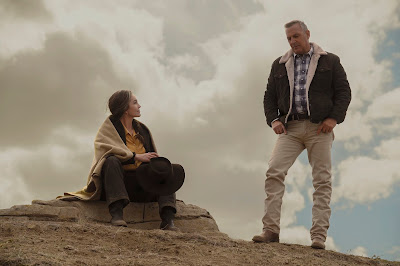 But is it? Necessary, I mean. There’s a degree of moral ambiguity to Let Him Go, a lingering sense that the Blackledge’s mission is predicated on the same false presumptions of authority that make the Weboys so repulsive. Donnie is abusive to both Lorna and Jimmy. He’s a stunted, pathetic man, and a poor substitute for James. He’s little more than the sniveling product of Blanche’s authoritarian hand. But he is Lorna’s husband. She chose him. Then again, what motivated that choice? Hopelessness, mostly. Numbness. Otherwise powerful women have long been forced to make concessions to the patriarchy, and many today would argue — for reasons passing understanding — that Lorna is making the right choice for her son by staying with him. Regardless, Margaret isn’t having it. She’s going to burn the place down, and we’re going to root for her while she does it. But, again: She is Lorna’s ex-mother-in-law. She has no real right to Jimmy’s future. So what premium can we put on the gut feeling that something is wrong? What right do we have, if any? 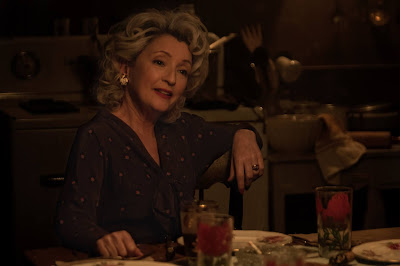 That ambivalence will ring true to anyone who grew up in a mixed family or felt resentful of the Most Favored Relative. Both Margaret and Blanche feel the same maternal urge to protect Jimmy. Both see him as a redemptive force in their own lives. Both are projecting their insecurities onto him, insisting that he needs them when it’s really a bit more the other way around. Let Him Go takes care to blur the moral line between them, and one could very easily imagine a version of the film set from the Weboys’ point of view. That complexity somehow makes the cathartic moments more resonant, though, and while Margaret’s Roaring Rampage of Revenge comes with an immense cost, the film’s sincere desire to see the vulnerable made safe and the virtuous reap their rewards is alchemically satisfying in all the right ways. It’s not crusty or fascistic or naive. It’s wholesome. Weirdly enough, that’s the best word for it. It’s wholesome. Things should be as simple as Let Him Go makes them. They’re not. But they should be. Being reminded of that makes the whole endeavor worthwhile.
Posted by Patrick Bromley at 12:00 PM