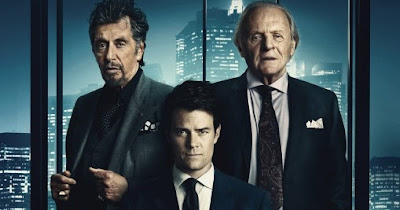 The review duo who orders cream sodas and then cancels the cream sodas.

Adam: Our All Pacino series returns this week with a discussion of the 2016 corporate thriller Misconduct, directed by Shintaro Shimosawa in his directorial debut. The film stars Josh Duhamel as an ambitious attorney who’s willing to cut corners (he has a hacker friend) in order to win cases. At one point he says something like he’s (I’m paraphrasing) “in favor of doing bad things to help good people.” Malin Ackerman is Duhamel’s ex-girlfriend who sends him a friend request out of the blue and wants to hook up. Duhamel is married to a nurse (Alice Eve, who could have benefitted from drinking a 5-Hour Energy in most of her scenes) but decides to meet up with his ex anyway and soon gets entangled with Ackerman, who wants his help taking down her evil boyfriend, a pharmaceutical CEO played by Anthony Hopkins. Duhamel enlists the help of Hopkins’ rival, played by Al Pacino, to back him. Complications ensue, including a terminally ill motorcycle riding assassin named “The Accountant” played by Lee Byung-hun, a hostage negotiator (Julia Stiles, who doesn’t strike me as the actor I’d choose to play a hostage negotiator), and Glen Powell as Duhamel’s office BFF. This movie’s all over the place.

Misconduct is forgettable and not very good, but I had some degree of fun watching it. I would place the film in the same category as Two for the Money, where you know you’re watching nonsense, but everyone is dressed well and the office buildings look nice so it’s easy to leave on. Pacino and Hopkins scenes are the most fun because they both feel about 50 percent committed and 50 percent laughing at the material. I joked in the headline about cream sodas and that’s because there’s a scene where Pacino meets Duhamel at an ice cream shop/diner and reveals that he comes in there all the time. The detail I love the most is he is on a first name basis with the teenager behind the soda fountain so when Pacino arrives he says “Anthony, make me a cream soda.” Then Pacino has a work conversation with Duhamel and leaves the scene saying “Anthony, cancel the cream soda.” I have to believe this is just a bit of business Pacino added to amuse himself. Hopkins has an air of “I’m smarter than all of you and this is such a waste of my time” in the movie, but it fits his character. This is like DTV Fracture for him, which is fine because I like Fracture.

What did you think of Misconduct? 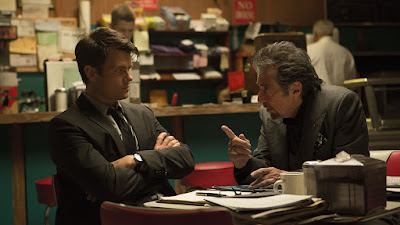 Rob: I think it’s a Reserved Seating movie of the highest caliber that nails the erotic-thriller-mystery trifeca: It’s neither thrilling, erotic, nor mysterious, but it REALLY thinks it’s all three. As you alluded to, nearly every actor is either visibly bored with or openly laughing at the material, and the movie is over-directed to such a staggering degree that the spectacle eventually becomes endearing. In short, I had a lot of fun with it. It’s one thing to grow up on Jaws and Alien rip-offs, but it’s even cooler to see smaller-profile movies riffing on modern genre trends in such sincere ways. Like, what movie does the Lee Byung-hun character actually belong in? Was that a John Wick thing? Did he get lost in Movieverse and just decide to make the best of it with Misconduct? How about the lip service to the Michael Mann corporate corruption stuff? I love the way this movie just throws spaghetti at the wall and walks away before any of it can stick.

Adam: I laughed near the end when there’s a dead body that winds up in two different locations and Josh Duhamel is like “You killed her!” and Lee Byung-hun is all “No, I didn’t. I moved her to the other place.” It’s so stupid.

Rob: This is prime DTV Supporting Al, though, the kind of performance that made me think he ended each work day by giving the director a noogie. But what the hell is with the Alice Eve performance? She’s a good actor, but this performance is like listening to a podcast at ½ speed. Shimosawa’s instinct to stage most of the more dramatic bits as long, static shots doesn’t help things, either. She’s acting like she’s waiting for the movie to fall asleep.

I found Anthony Hopkins’ presence in this movie hilarious. I can accept Al slumming it, but this felt like a major star doing their first convention appearance and then realizing they’re not cut out for it. He’s both wildly miscast as a ruthless CEO and insanely overqualified for this kind of project, in general. I mean, he’s a working actor, and any project would be insane not to use him if he was willing, but I just couldn’t help but laugh every time he was on the screen with his corporate overlord hair and swagger. It’s an odd contrast to Josh Duhamel, a person who -- right now, as I reflect on this movie that I just watched -- I could not pick out of a lineup. 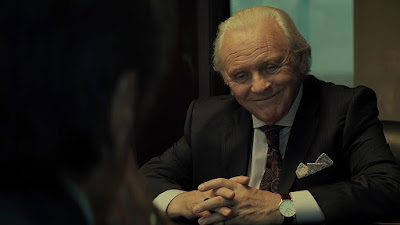 Adam: I can’t tell if Josh Duhamel is an actor that Hollywood is never letting do his unique thing or if he’s like an hourglass and we’re waiting for him to stop being handsome because that’s his thing.

Rob: Who was your favorite nonsense tertiary character? I liked Hacker Guy. I liked the way he insists he can “hack anything” and then explains that deleting social media messages is way too hard.

Adam: There’s a few. Glen Powell as the dude bro lawyer friend who is like Josh Duhamel’s Jiminy Cricket, the cops who go to Duhamel’s home to arrest him but don’t surround the building, the teenager who works at the soda fountain that hates his job, and Julia Stiles as the hostage negotiator who wears her emotions entirely on her sleeve.

Another part I thought was funny was when Malin Ackerman hired some guy to beat her up (so she can take photos being bruised) and the guy is like “I’m into rough stuff, but this is too far lady, but like, can I also get those photos too?” This movie’s bizarre. 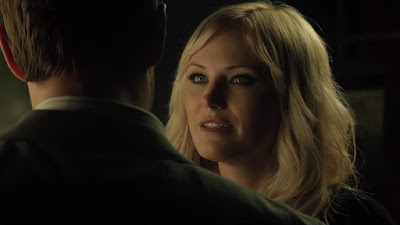 Rob: I like that Bruiser Dude never shows his face on camera. Were they afraid all the Central Casting white dudes would confuse us? What about when Josh Handsome has that final confrontation with Hopkins and then Hopkins just...lets him go? I was like, “Wait, that’s the end of the scene?”

Adam: What did you think of Al’s last scene? You can give spoilers.

This is your warning everyone, spoilers for Misconduct.

Rob: You mean Checkhov’s pen? I loved it. Early on, Pacino gives Handsome a $68,000 fountain pen to prove...something. Branding is important? I can’t remember. Later, after the cops have surrounded him (Pacino is the secret bad guy), Handsome throws it back and Pacino pretends to bobble it in order to grab a cop’s gun and commit suicide. What makes it art is that Pacino is the only one in the film who bothered with the New Orleans accent, so his dramatic exit ends up like something out of A Streetcar Named Desire. Not only that, but it’s all followed by a dramatic reveal involving Alice Eve that might be the biggest cinematic shrug I’ve ever seen. This movie is so weird.

Adam: Pacino’s fate reminded me of Carlito’s Way, where I expected a voiceover to show up of Pacino saying “I’m sorry, baby. Look at me - dead in a cafe. That’s how it goes I guess when you misconduct your whole life.” We’ll be back next week revisiting another box office bomb: 2005’s Sahara, starring Matthew McConaughey, Penelope Cruz, and Steve Zahn. Until next time…