by Rob DiCristino and Patrick Bromley 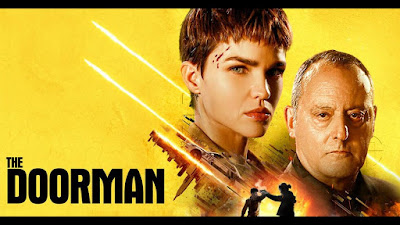 It's the crossover event you've all been waiting for.
Patrick: Rob! I was going to write a Heavy Action piece on Ryûhei Kitamura’s new Die Hard rip-off The Doorman, but my heart and sense of guilt simply wouldn’t let me write about an action movie with Ruby Rose in the lead without you. And since the movie feels made for renting at Redbox, this seemed like the perfect opportunity for our first-ever column crossover!

Rob: This is why we’re friends. I thank you for this consideration, and I sincerely hope our readership is ready for this blockbusting crossover: Today, Heavy Action goes Redboxing!

Let’s get into it: The Doorman features my beloved Ruby Rose as ex-Marine Ali Gorski, whose traumatic failure on an elite detail (?) causes her to leave the service (I think?) and head home in search of a job (Is that how this works?). Her uncle Pat (Philip Whitchurch) hooks her up with a doorman gig at a swanky New York apartment building (This movie absolutely, 100% was shot in the real New York City), where her brother-in-law (Rupert Evans as Jon Stanton) lives with his two children. Wait, her family lives in this building? These people let their uncle be their maintenance man? Is he literally their uncle? You know what? Whatever. Aksel Hennie plays Borz, the inside man who gives Victor Dubois (Jean Reno) and his crew of baddies access to the mostly-empty building on what is apparently Easter Sunday. Dubois is hunting for a collection of valuable art, which he eventually realizes is hidden in the Stantons’ apartment. When the baddies take the family hostage, Gorski goes all John McClane to take out the Eurotrash.

The Doorman is pretty dull. The action is poorly staged, the central relationships are ill-defined, and the dialogue is Action Movie Mad Libs. It’s yet another Die Hard ripoff that doesn’t actually understand what makes Die Hard good. Ruby Rose brings that signature angular androgyny I love so much, but there’s not enough to Gorski to make her interesting. It made me sad. However! The Doorman does feature some action movie tropes I very much enjoy:

- Standard-issue grenades produce flaming infernos.
- A guy gets electrocuted by a cable in the water, and the electrical current stops once he’s dead.
- A character knows Morse code because they “used to be a Boy Scout.”
- A baddie disguises himself as an authority figure.
- A baddie gets excited by a safe and describes its specs in salivating detail.
- First responders inexplicably abandon their responsibilities because the story requires it.
- Baddies with ranged weapons wait to be kicked in the face instead of shooting at their attacker.
- Characters indicate their refined fanciness by discussing art and wine.
- The tech baddie is irascible comic relief, and the second-in-command has his own agenda.
- The final boss gets an over-the-top CGI death. 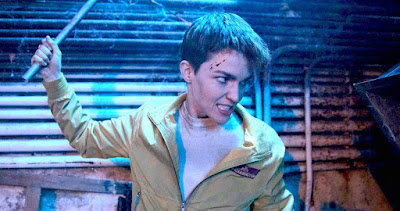 There are more, but I digress. What did you think of The Doorman? Are you familiar with any other Ryûhei Kitamura movies? Remember how that five-year-old girl had a Facebook account?

Patrick: Why is this movie not called The Aunt? She’s not protecting those people because she’s the doorman and feels a sense of obligation to the building, she’s protecting them because they’re her literal family. The relationships in this movie are so weird. Like, why is there a backstory that Ali and her brother-in-law were somehow romantically involved at one point? What dramatic function does that serve? And why does her uncle not mention that her family lives in the building when he gets her the job? I don’t think I even realized the uncle worked in the building when he first recommends the gig to her. Why does Ali need to be suffering from such trauma when the movie starts? How does that inform her character or what happens in the movie? This is a bad screenplay.

It’s also the most generic and uninspired Kitamura movie I’ve seen. Downrange, his last English-language feature, was deeply unpleasant but proved he could do ultra violent suspense very, very well. No One Lives is a crazy subversion of a serial killer movie. Versus is just all around nuts and great. He’s a filmmaker whose name gets me excited to see what he’s doing next, making The Doorman that much more of a bummer. As you said, the action is generic and flat. The effects are cheap and shoddy (there is some outdoor green screen photography in a late movie roof scene that’s downright unforgivable). The performances are mostly off, like they’ve been filtered through an unsuccessful Google translate.

What did you think of Ruby Rose in the lead? Unconvincing American accent aside (why not just let her use her real accent?), do you think she has the goods as an action star? 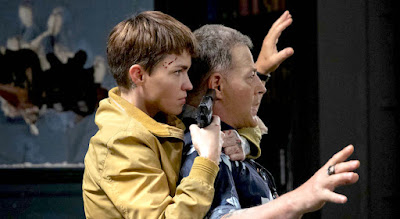 Rob: I think Ruby Rose is an engaging screen presence who knows how to take over a frame. The camera is drawn to her, which makes sense when you consider her modeling background. She definitely has a certain charisma, but I haven’t seen anything so far that makes me think she’s going to be an especially good action lead. My favorite performances of hers are things like John Wick: Chapter 2 or xXx: The Return of Xander Cage, where she’s able to slide in and out in supporting moments. Lead performances (like her mostly-forgettable turn on The Batwoman) still feel like a work in progress. She just doesn’t have a ton of range quite yet.

Here’s a question: Is Jean Reno bad in this movie? I haven’t seen many projects where he gets to use his real accent (As he at least seems to be doing here), but this Head Baddie dialogue is pretty boilerplate stuff he should be able to make work a little better than he does. Is he just holding his breath and cringing through it? I usually find him a bit more genuine.

Patrick: Jean Reno’s best performance is still Leon: The Professional, a movie in which he barely talks. Not sure what that says about him as an actor, but here we are. I’ve seen him be fun in movies before, but I can’t think of another movie outside of Leon where I thought “Hey, Jean Reno was really excellent there.” I haven’t seen his whole filmography, so that’s probably not even fair to say. This movie made me a little grouchy. To be honest, I can’t tell if he’s bad in The Doorman or not because he’s just another color in this shitty box of crayons -- he’s off, but so is everything else. It doesn’t help that his character is rendered pretty much pointless by the presence of Aksel Hennie as Borz, a name that’s said more than any other word in this screenplay. I was talking recently with a friend about action movie bad guy dynamics: that Die Hard once again wrote the template for having a Big Bad (Alan Rickman) and a featured henchman (Alexander Godunov) -- the brain and the muscle. The Doorman tries to have the same dynamic, but there’s nothing about Jean Reno’s character that suggests he’s the smartest, most devious guy in the room. He just wants some art. Borz ends up filling both traditional dynamics, leaving Reno nothing to do as the main bad guy.

Rob: Right? Why is everything so half-baked? There’s this checklist of incongruent character subplots that they just jam together without any real through-line. 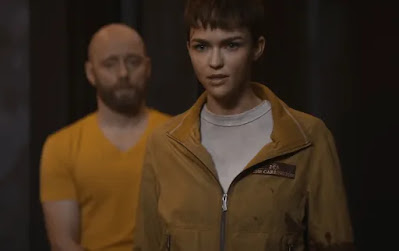 Patrick: Am I being too hard on The Doorman? There was potential here for it to be something kind of quirky and different, from the director behind the movie to the casting of the lead. Instead, it feels like just another DTV action movie in a marketplace glutted with product just like it. All it’s missing is Bruce Willis sleepwalking as DuBois.

Rob: It’s always more disappointing when you know something bad was made by talented people. The Doorman didn’t offend me, but it felt like a journeyman job for all involved. That final over-the-top villain death actually made me angry because it felt like the one time the movie had a pulse.

Here’s the real question: Will Ruby Rose return for John Wick: Chapter 4, or will I get Mantzoukas’d again?

Patrick: She was totally the Borz of John Wick: Chapter 2, wasn’t she?
Posted by Patrick Bromley at 5:00 AM