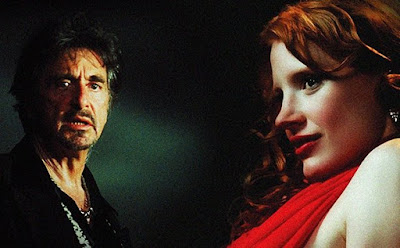 The review duo who go deep into the esoterica of Al Pacino.

Adam: This week we’re reviewing a double feature of sorts. First, the documentary Wilde Salome (directed by Al Pacino), which is similar to his earlier film Looking for Richard but this time about Oscar Wilde and his play Salome. The documentary is half a biography about the life of Oscar Wilde and half centered on the difficulties of putting on a production while also filming a documentary of the same show simultaneously. This is followed by an actual filmed version of the play Salome, also directed by Al Pacino. Salome is a one-act play that tells the story of Salome, the stepdaughter to King Herod, who requests the head of John the Baptist as a reward for pleasing King Herod by performing the dance of the seven veils. Aside from Mr. Pacino, both films feature some familiar faces including an early Jessica Chastain performance as the title character, Kevin Anderson (from Sleeping with the Enemy fame) as John the Baptist and Geoffrey Owens (from The Cosby Show) as one of King Herod’s (played by Pacino) men.

The combined length of both films is nearly three hours and the experience felt like I was going for a doctorate in Al Pacino. This is about as niche as it gets when it comes to movies. I was reminded of when I went to the Wilmette Theater in Illinois to see Genius Within: The Inner Life of Glenn Gould and then thought to myself “Is this a cry for help? Have I gone too indie??” Wilde Salome/Salome is like the 9th circle of independent film. That aside, I was often interested in what was happening. I preferred the documentary Wilde Salome to the filmed version of the play because it worked as an intro to Oscar Wilde (for whom I’m a beginner) and a capsule of seeing Al Pacino very much in his own artistic element. Only a celebrity of his stature could get this many people aligned to such a vanity project and there’s a certain fascination to seeing a group of people at the whim of Al Pacino. I’m sure the play is great (and I’m just not refined enough to enjoy it) but it felt like a 15-minute situation stretched out over 80 minutes. By that point in the experience, though, I was oddly hypnotized by the whole thing. It was hard to remember a time where I wasn’t in the world of Al Pacino, Jessica Chastain, Oscar Wilde, and Salome. When the play abruptly ends, it was like waking up from a dream.

Rob, what did you think of the Wilde Salome/Salome experience? 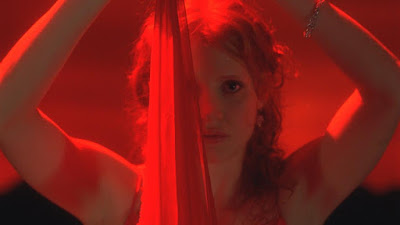 Rob: I almost wish this was the last entry in our All Pacino series, because I completely agree that we are both now Professors Emeritus in Pacino Studies. I’m not even sure how or where to begin. Remember that gag in Jack and Jill where Al kept answering his phone on stage and everyone in the theater would get angry at him? This feels like a feature-length version of that. Whereas Looking for Richard at least had the through-line of an intellectual passion project (in which Al tries to make Shakespeare more accessible for modern audiences), this came off rambling and desperate, as if we were given a front row seat for the actor’s midlife crisis. When it was all over, I just wanted to buy Al a beer and reassure him that he doesn’t have to work so hard anymore.

Adam: I like when Pacino and Estelle Parsons preemptively know they screwed up by making the production a staged reading in front of an audience when people thought they were going to a play.

Rob: That was so odd. And as bad as I felt, we have to point out that Pacino’s insistence that we sit through a documentary about his film before watching it in its entirety is egotistical as all hell. I agree that the documentary is the more fascinating half, though, and it’s kind of interesting that so much of it is footage of Al clashing with his cast and crew (and eating turkey sandwiches). There are more than a few moments in which people are visually uncomfortable and/or confused about what’s going on. It’s odd that Al would elect to construct the documentary in that way. Was it a metatextual thing, or was it just him doing the best with the footage he had? It’s hard to tell. Like, did I understand correctly that Al invited people over to a party and then surprised everyone by having cameras so that he could film it like it was part of the play? Did I get that right? I felt so bad for Jessica Chastain at that moment.

Adam: Oh G-D. I forgot about that part. Poor Jessica Chastain just wants to unwind, and she’s thrown into a weird ass evening of dinner theater. She’s a real trooper and the MVP of this production. She’s very good in the play. 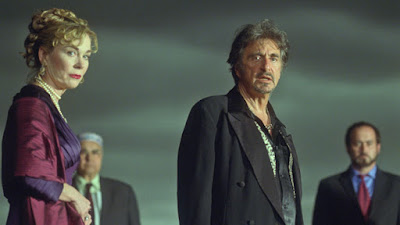 Rob: It’s clear that this project was inspired by Al’s then-newfound fascination with Oscar Wilde, but are we meant to draw a connection between the two? By playing Herod, it felt more like he was trying to get us into the whole “I am a king who fears the wrath of god” thing. Like, is this an exercise in ego in which an egotistical tyrant reckons with his own powerlessness in the face of a higher power? Is it a self-referential Mobius strip thing? There seems to be some discussion to that effect in the documentary, and I’m into that. Maybe the problem is that Salome (the play) is kind of bad and mostly about a drunk guy who is horny for his stepdaughter.

Adam: That was my main takeaway of the play, too. I would ordinarily say that there has to be more to it than that, but Al had an entire feature-length documentary to explain himself and it wasn’t done convincingly. I honestly think Pacino had a vision of this project in his head and he quickly realized he was in trouble and his intentions weren’t translating. Or that he was delusional. I laughed really hard when one of the crew members asked why he was playing King Herod with an effeminate voice and he’s like “Uh duh” and the other guy is like “Um, thanks.” That seemed to be the level of simpatico that was happening among the cast & crew.

Rob: The whole Herod voice and affectation are...I don’t know. A problem. I think we’re both fans of when Al goes big, but his characters in Heat and Scent of a Woman at least feel fleshed-out with elements that justify their eccentricities. This whole performance, on the other hand, felt undercooked. Al’s not the kind of actor who feels restricted by the stage, so I have to conclude that he just didn’t have a take on the character that gelled with the other elements, such as his decision to dress the actors in modern clothing while keeping the original Biblical-era (era) dialogue. Maybe it was the time crunch? At one point in the documentary he yells, “I only have these people until five o’clock,” so maybe he just needed a few more takes. I agree that Jessica Chastain is doing her best, and Roxanne Hart put on an eye-rolling clinic as Queen Herodias. 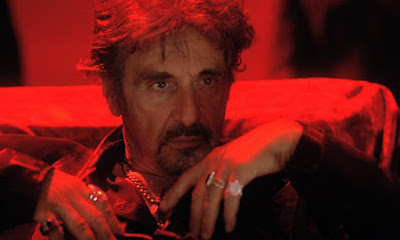 Adam: We’re being professional in our discussion but let’s get real. What the hell did we just watch? I feel as if I had a eureka moment that what I’m supposed to think is high art and class is really just a bunch of stuff and nonsense. Can you imagine if you paid to see this live in a theater? I watched this from 5 am to 11:30 am on Sunday morning. I started taking breaks and then I just said to myself “Just let it go. Even if you stop paying attention. No more pausing. It’s the only way to get through this.”

Rob: I’m an Oscar Wilde fan, generally, but this is just...yeah. This was a bad mix of flavors. I mean, the whole thing builds to a seductive dance from Jessica Chastain and I wasn’t even interested at that point. It just felt like I was leering. It made me sad.

Adam: Yeah, the whole thing was like a 1 percenter’s version of a Girls Gone Wild video. I’ll give Wilde Salome/Salome this much…it wasn’t The Humbling.

Rob: Never mention The Humbling again. What’s up for next week?

Rob: Until next time…