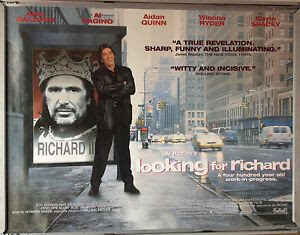 The review duo who know The Bard is The Ward.

Rob: This week (in a notable first for this series), we’re covering a film starring AND directed by Al Pacino! 1996’s Looking for Richard chronicles Pacino’s investigation of William Shakespeare’s continuing (?) social relevance to actors, scholars, and audiences through a performative analysis of Richard III. That’s...honestly the most straightforward way I can explain the film. Another way might be: “Al Pacino fucks around in castles with his friends and barks at random strangers on the street.” Both are must-see films, as far as I’m concerned.

This was my first time seeing Looking for Richard, and I appreciated it on two levels: One, I enjoyed seeing Al in his element: Hanging out with other actors, wearing Elizabethan battle armor, and cheesing for the camera. That’s just good fun. The second level, though, was a little more personal: As an English teacher, I spent years trying to convince young people — specifically young American people — that Shakespeare told enduring stories that would be relevant to their lives. I never did it successfully, I don’t think, for a lot of the reasons Al discovers in conversation with everyday people: The vocabulary feels archaic, the cadence is complex, and the plots are either too formulaic or hopelessly convoluted. I don’t agree with any of that, of course, but I can absolutely relate to someone trying to “teach” or “explain” something that requires a kind of intrinsic love that can’t be assigned by someone else.

What did you think of Looking for Richard? 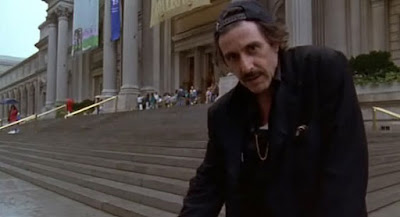 Adam: I’m glad to have finally seen Looking for Richard, which has been on my radar since 1996 after Siskel & Ebert reviewed it on their show (it made Gene Siskel’s top 10 list). The film reminded me of an episode of MTV’s The Real World but about Shakespeare and Richard III. Overall, I found a lot to enjoy in Looking for Richard, but I must admit I went in with a foolish expectation that I was going to be won over into “getting” or liking the works of William Shakespeare more than I do now. I figured if Al Pacino couldn’t teach me to love Shakespeare, there was no chance of it ever happening despite my best effort.

What you’re saying about your role as an English teacher and trying to relate it to students is interesting because I was having a similar conversation with Patrick last night about the movie and Shakespeare in general. I’ve tried a bunch of times to love Shakespeare’s plays, but have always struggled getting there. What happens is that I'll be at a loss reading the text, get one of those books that analyzes it page-by-page along with the play (which is like reading lyrics and expecting to hear a song), and then stop out of frustration. The best thing about Looking for Richard is Pacino’s unbridled love for Shakespeare’s work. That’s infectious regardless of it being about Shakespeare or acting or any number of other topics. When Al is fanboying about Richard III, I found myself the most invested. It’s when I see his right-hand-man, Freddie (I think that was his name), where I’m like “Oh, I’ll never get this like he gets this.” He comes at it from a much more academic angle. I think a challenge for novices having their first experience with Shakespeare is that the people spreading the gospel are often coming at it from an “Intermediate” or “Expert” stance and not at a bridge “Beginner” level. Even typing this makes me feel bad because I’m afraid it’s revealing me to be stupid or ignorant in some way. Pacino has a few more Shakespeare films that we’ve yet to review (including The Merchant of Venice). I hope Looking for Richard somehow assisted in tuning my ear to Shakespeare on film.

I also wish they didn’t cut from shots of child actors to Kevin Spacey’s sneering creeper face. Through no fault of the documentary, Spacey’s presence took me out of the experience several times. 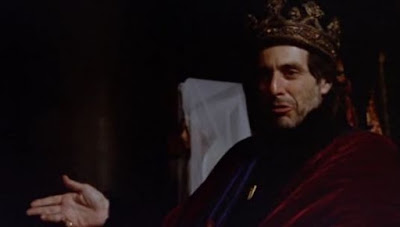 Rob: This movie has a Kevin Spacey problem, for sure. It feels gross to know he’s just lurking around there, waiting to strike. Also, there’s nothing stupid or ignorant about not being into Shakespeare. To continue your metaphor, it’s all about what your ear is tuned to and what appeals to you. I’ll never understand Ulysses or Finnegan’s Wake the way I’m apparently supposed to, and it’s probably because James Joyce doesn’t speak to me the same way Shakespeare does. I also totally understand what you mean when you talk about how hard it is to appreciate something like Shakespeare by way of “experts” who already love it. That’s always been a major roadblock for me in my teaching career, and I’m learning to lean more heavily on the textual, instructional part and hope that maybe the love will come in a more organic and lasting way, later on. And if it doesn’t, who cares? Everyone should just dance to whatever music moves them.

Can we talk about this amazing period in Al Pacino fashion history? How many combinations of blazers, baseball caps, and scarves can one man pull off? All of them. The answer is all of them. I also loved how clearly excited Al was to be playing a hunchback. That long shot of him dancing down the Met steps all hunched over is one of my new favorite things. I would have loved to have been walking around in Manhattan in the ‘90s and seen Al Pacino spinning around lamp posts and singing about the winter of his discontent.

Adam: One of the great things about the documentary is Pacino made it over the course of a few years so in one scene he’s rocking a backwards Scent of a Woman cap (not on eBay) and in another he’s grown out his Carlito’s Way beard. His fashion is enviable because he manages to look artistic and dress like a 7th grader from the 1990s all at once.

Rob: My one gripe or quibble with Looking for Richard is that it never really finds an answer to its questions about Shakespeare. Not that it has to, of course; there are no “right” answers. But the film is so formless (they’re not putting on a production of Richard III, nor are they making an actual movie version) that it would have been nice to have Al’s musings on the subject come to some kind of conclusion. Maybe I’m looking for too much, here? I still enjoyed it. Maybe I just want more Pacino voice-over.

Adam: Yeah, the movie sort of peters out as a doc, so the ending is more them acting out the end of Richard III and packing up their shit before the end credits roll. I wonder if that was intentional, since one of Al cohorts says how flat he finds the last act of Richard III to be once you’ve seen the superior acts preceding the finale. 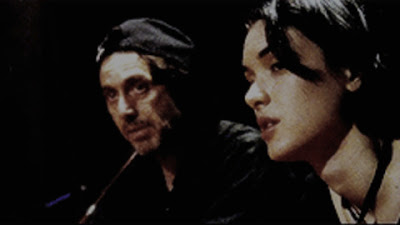 Who was your favorite of the Looking for Richard co-stars? Mine were Kevin Conway (from The Funhouse!) and the mustachioed guy from Die Hard with a Vengeance (he played John McClane’s captain). He’s like if Robin Williams became Inspector Clouseau. I also enjoyed the bit with Winona Ryder because I’m on a Wi-Ry high after seeing Little Women (1994) for the first time recently.

Rob: Pacino’s line about casting her was great. Something like, “We need an actress experienced enough to be captivated by the play, but young enough to not really understand it at all.” Showbiz! Anyway, my favorite co-star was probably Kevin Kline. I love the story he tells about taking his high school girlfriend to see a Shakespeare play, making out in the back row, and then bailing on it at the intermission. There’s a moment later when Al is reciting Shakespeare lines to a crowd of students, and the camera specifically targets a couple making out in the back. I thought maybe that was a callback? Al doesn’t mention anything about it, though. I just go by what Al says.

Adam: We should all go by what Al says. We’ll be back next week with a new Reserved Seating we’re calling “A Stack of Rentals.” In it, we pick a month from the past (in this case July 1996) and we watch four movies that were new to home video at the time. Until next time…