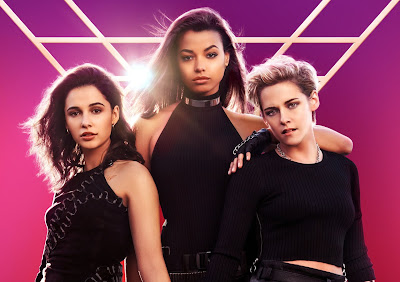 In which Elizabeth Banks tries to save Sony from itself.

The soft reboot train keeps rolling along with Charlie’s Angels, a sequel to both the original ‘70s television series and the ‘00s films starring Cameron Diaz, Drew Barrymore, and Lucy Liu. Sony loves this formula, huh? Jumanji: Welcome to the Jungle, Ghostbusters (2016), Men in Black: International? Throw in Terminator: Dark Fate, Star Wars: The Force Awakens, and Jurassic World, and The Soft Reboot just might qualify as its own genre. Well, Charlie’s Angels fits right in. Written and directed by Elizabeth Banks, this latest effort to reignite a dead franchise falls somewhere in the middle of the pack. It follows the Sony formula, sure: Glossy camerawork, obnoxious brand synergy, and a world-ending MacGuffin plot complete with predictable double-crosses and pointless cameos. But thanks to Banks (who receives sole screenplay credit), it also has a playful wit that mitigates some of the worst instincts of its corporate parent. It’s not Good, by any means, but we have to take our blessings where we can find them, don’t we? 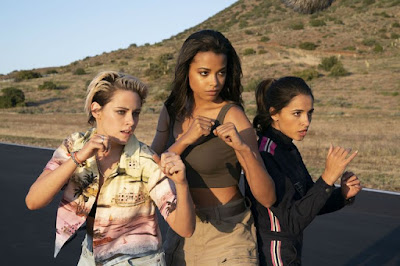 For forty years, The Townsend Agency has been the gold standard in sexy espionage. You know what I mean: Hot ladies in skimpy outfits kick-punching and punch-kicking their way through the worst black market scoundrels and white-collar criminals our decaying society has to offer. All the while, John Bosley (Sir Patrick Stewart, picking up where Bill Murray left off) has proudly trained generations of Angels to be their kick-punching, punch-kicking best. He’s even expanded the brand, taking Charlie Townsend’s (Robert Clotworthy) firm international: Now, a new breed of Angels — including the scholarly Jane (Ella Balinska) and the delinquent Sabina (Kristen Stewart) — are kick-punching all over the world, trained by “Bosleys” (now a rank, rather than a name) like Banks, Djimon Hounsou, and Michael Strahan. When a corporate whistleblower (Naomi Scott as Elena) reveals that a revolutionary clean energy project has a fatal flaw that could be weaponized for the highest bidder, the Angels kick-punch into action to stop the bad guys and root out a mole in their midst.

You’ve seen literally any movie at all, so you know how Charlie’s Angels plays out: The Angels recruit the beautiful and intelligent Elena, show her the sexy ropes, take her on a sexy mission or two, and end up forming a sexy bond of sexy sisterhood. Lines are crossed, stakes are raised, and kicks are punched. But as much as it all seems like a boring retread of familiar themes, we can feel Banks’ reassuring sharpness (that which helped drive my beloved Pitch Perfect) between the lines, a kind of snarky eye-roll at the proceedings that lets us know we’re not to take the whole affair too seriously. While none of the character beats or emotional gut-punches work in any lasting way, there’s nothing cynical or offensive about Charlie’s Angels, either. It’s a good time. It knows exactly what it is, what it wants to accomplish, and how much fun it sees fit to make of its preposterous premise. Banks seems to know where she has to toe the line and where she has a little space to play (there’s a fun Birdman of Alcatraz bit that wouldn’t have made it out of the editing room if her character hadn’t delivered it), and she peppers enough of these diversions throughout the film to keep it interesting. 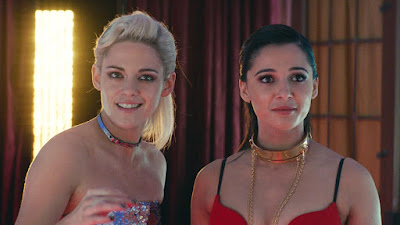 Which brings us, at long last, to Kristen Stewart. I’ve buried the lede long enough: She steals the movie. She’s in her own movie, really, peeking her head into this one at random intervals in the hopes of spicing things up a bit. Her Sabina is feisty and extra in that focus-grouped way — Special measures are taken to assure hetero men in the audience that her short haircut is Actually Very Sexy — but she’s getting away with just enough to help us see why she’d take this role in the first place. While the actors around her posture and pose, she strolls. Those heroic, self-righteous monologues that Scott and Balinska make meals out of? She throws them away. She is laughably, egregiously overqualified for Charlie’s Angels, but that somehow makes her presence more endearing. Her scenes with Banks are like little secretive glances to those in the know: “Sony gave us $50 million to fuck around in high heels,” they seem to say. “Just watch us this kick the shit out of this Stephen Miller-looking douchebag and look jaw-droppingly good doing it.” Deny them that. I dare you. 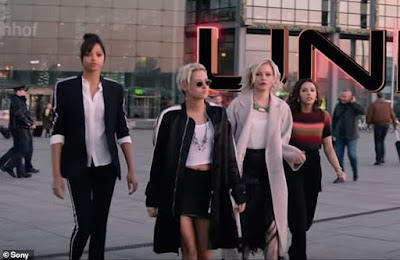 There is absolutely nothing revelatory or consequential about Charlie’s Angels. You will forget most of it the minute it’s over. But it’s watchable. It’s well-intentioned. It celebrates women without objectifying them and tries its best to pay homage to those who crawled so it could strut. It’s willing to work within prescribed boundaries in order to show us that it’s not all bad. Mainstream creativity is still possible, if frowned upon by those looking for the safest possible investment. And, look. Let’s not kid ourselves. Charlie’s Angels will bomb this weekend, make no mistake. It’s going to be bad. Its failure (along with that of Terminator: Dark Fate) will be weaponized in “Woke = Broke” think-pieces written by wanna-be tastemakers looking to glorify the mediocrity of Joker and Gemini Man. But Elizabeth Banks has played the game long enough to know that change comes in excruciatingly small increments. Nothing happens all at once, and Charlie’s Angels could very well end up being a step along a more positive path. If not, at least we got to see Kristen Stewart imitate an orangutan.
Posted by Patrick Bromley at 5:00 AM