Movies is Good: NEWS OF THE WORLD

God, I love a good Western.

I finally viewed the new Tom Hanks film, News of the World, here in the comfort of my home. Though it was released on December 25, Netflix, in its infinite beneficence, made the film available to stream everywhere in the world EXCEPT THE USA, where currently it is available only as a $20 VOD profit-platform offering. This will help Netflix wring a few measly millions out of the property because, with 2020 THIRD QUARTER profits topping SIX BILLION DOLLARS, God knows they need the money. 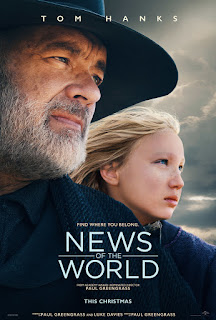 The continued pandemic quarantine sees me completely out of patience. Because I subscribe to so many damned streaming services, pay an ungodly monthly cable bill, and support the dwindling Physical Media-Industrial Complex by purchasing many little shiny discs, I feel strongly that I SHOULD GET TO WATCH ANY MOVIE EVER, made WHENEVER, for NO ADDITIONAL COST, whenever I GODDAMN PLEASE. Hamilton on the Fourth of July? Check! Wonder (Yawn) Woman 1984 on Christmas Night? Check! Can Heironymus Merkin Ever Forget Mercy Humppe and Find True Happiness? EMPHATIC NO.* News of the World the very day the film makers complete post-production? You betcha! Sadly, this is a fantasy that leaves me screaming into my pillow.

But that’s only because News of the World is so good. (Thought I buried the lede, didn’t you?) I am frustrated that I had to wait until the middle of January because this film would have made my Ten Best list for the year if I had ONLY BEEN ABLE TO SEE IT. 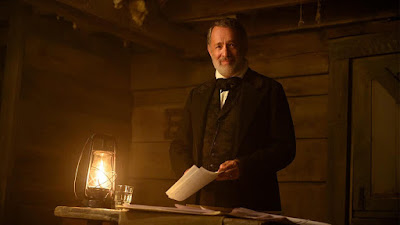 One of my college mentors was the great David Desser, who once said that you cannot profess to love film and not love Westerns. This is true. It has never not been true. I think it becomes more and more true with each passing day. News of the World is a sly Western, a Western that does not loudly announce itself as such; the games that News of the World plays with some treasured Western tropes are reason enough to see it. But it also features extraordinary, nuanced performances, great dialogue, terrific suspense, and the feeling that sometimes things can work out for the best.

Lately, I need movies to suggest that “sometimes things can work out for the best” on a near-weekly basis.

The Plot in Brief: Captain Jefferson Kyle Kidd (Tom Hanks) roams the post-Civil War South and reads newspaper stories to assembled crowds. He charges a dime. He is good at his job. One day he chances upon an overturned wagon; the driver has been lynched while in the service of returning young Johanna (Helena Zengel)—a white girl kidnapped by Indians—to what remains of her proper family. Kidd attempts to find help for the girl but discovers that, due to bureaucratic red tape, disinterest, and laziness, the girl’s best chance is for Kidd to take her himself. This sets in motion a journey fraught with drama, violence, and discovery.

We first learn that Tom Hanks’s Jefferson Kidd is a good guy to be trusted via one of my favorite Western tropes: Death has meaning for people with a moral center. The bad guys find death meaningless—in fact, except for money and mayhem, the bad guys find everything meaningless. Captain Kidd, however, gives the dead wagon driver a proper burial, and if we have seen enough Westerns, we know that Johanna could be in no better hands. (Of course, if we have seen enough Tom Hanks films, we could intuit the same thing.)

Jefferson and Johanna’s developing relationship is made more challenging by the fact that they don’t speak the same language. In turns, they each pick up a little English, a little German, and a little Kiowa along the way. Because of the language difficulties, Helena Zengel gives what is, for all intents and purposes, a silent film performance (EXCEPT WHEN SHE IS SINGING!) which makes it even more gripping and terrific.

The sequence that will get the most attention, I suspect, involves Kidd and Johanna coming upon a nasty company town run by local despot Mr. Farley (Thomas Francis Muphy), who rules with an iron fist. He wants Kidd to perform that night, but reading only from his newspaper that details only his fictional exploits. Kidd’s response is masterful, and at that point the parallels between News of the World on the one hand and Fox News on the other are unmistakable. Of course, Westerns have always existed as barely disguised allegories: they are entertaining but trenchant folk tales explaining how we arrived at our current society.

Like all great Westerns, News of the World features a bounty of great supporting roles. Exemplary “little” performances fill in the edges of this canvas, including Michael Angelo Covino as Almay, a hissable villain that Hanks immediately labels “scum.” Elizabeth Marvel as Mrs. Gannett, Ray McKinnon and Mare Winningham as Simon and Doris Boudlin, and Bill Camp as Mr. Branholme effortlessly create memorable characters in just a single scene apiece. Counted with Hanks and Zengel’s extraordinary leads, the movie is an acting tour-de-force.

I cannot recommend this movie highly enough. Since I saw it last Thursday, I can’t stop thinking about it: the theme of the importance of narrative in our lives, the impeccable direction by Paul Greenglass, and the breathtaking cinematography, which shows us just how beautiful this country is. News of the World has lessons to teach about living with loss and finding hope in what’s left—a balm for anyone eager to put 2020 behind us.

*As I’m sure my fellow Anthony Newly fans know, Can Heironymus Merkin Ever Forget Mercy Humppe and Find True Happiness? has never been made available on any form of physical media. If it were available, do I deserve to see it for no additional cost, whenever I want? ABSOLUTELY GODDAMN YES.
Posted by Patrick Bromley at 5:00 AM