A Year Without Movie Theaters 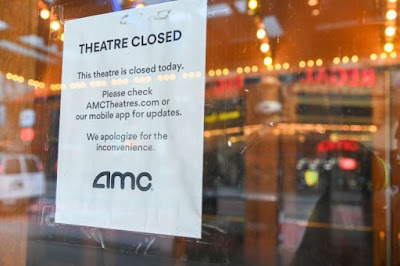 I can’t wait to go back to the movies.

The last time I was in an indoor movie theater was March 12, 2020. I knew at the time it was my last theater trip for a while because the shit was about to hit the fan with COVID-19 and we were all going to be on lockdown starting in the next few days.

I went with Mark to see Bloodshot and recall several things about the experience: 1) Being nervous to hug my friend, 2) Being irritated a stranger was sitting two seats away from me in his assigned seat and not spreading out, 3) Seeing trailers for one movie after another when I was sure I wouldn’t be seeing that movie for maybe a year (Fast 9 had already been delayed from 2020 to 2021 at that point) and 4) Leaving Bloodshot for a few minutes in the middle to walk around the lobby because I couldn’t focus on the movie and wanted to just soak in the building one last time.

A lot has happened since March 2020, which already feels like such a long time ago. The way we watch movies is very different and looking back these are five observations, I have about my own personal experience being a movie fan without theaters for a year.

Streaming Services Sadness
I’m conflicted about streaming services. On one hand, they’ve provided me with a year’s worth of entertainment in the safety of my home, but on the other I can’t get over my feeling that they’re often lesser than movies. That’s probably unfair to say, but they do all blend together after a while into this homogenized sameness that feels like content more than cinema (yep, I’m one of those guys). It doesn’t help that streaming series are becoming more cinematic and streaming movies are starting to look more like expensive television. After quarantining is done, I’m heading back to first run and repertory theater’s constantly just as an excuse to stop watching movies at home.

Especially early in quarantine, I craved in-person experiences and pop culture/special interest documentaries were safe substitutes that became invaluable as I stayed at home. Whether I wanted to go to the drive-in (At the Drive-In), repertory theaters (Out of Print), a comic book store (My Comic Shop Country), a video game reseller (Not for Resale: A Video Game Store Documentary), a minor league baseball game (50 Summers), the mall (Jasper Mall), a donut shop (The Donut King) or Blockbuster Video (The Last Blockbuster), these movies provided a much needed getaway.

PVOD Got Its Hooks In Me
The first PVOD purchase ($20) I made was for The Way Back last April. To me, it was basically a rental since I haven’t re-watched the movie and I sort of resent it sitting there in my digital library. The movie was good, but c’mon go, away. After that, PVOD releases became a game of “Is it worth the $20?” In most cases I folded and have rented probably a dozen movies at that price point. I even rented Mulan for $30 because my rationale was a) I want to see the movie, b) It would have been a theatrical release and c) This is about the same amount I was spending each month on an AMC Stubs A-List subscription. Starting in 2021, all “Is it worth the $20?” consideration just went out the window. I’m too pandemic-fried to go back and forth with myself on spending $30 to rent Raya and the Last Dragon. I just go for it. I can’t wait to go back to theaters if for no other reason than A-List was more economical. I almost rented a theater for myself to watch something in a cinema and “celebrate” this anniversary, but nothing met the “Is it worth the $100-$150?” criteria.

The New Hype
Back when I was going to theaters I would get hyped for a movie by the trailers and the ensuing countdown until the film’s release. During quarantine, the movies I wanted to see kept getting pushed so the trailers themselves almost felt like the movie. What became the trailer equivalent was when a film locked in a release date and wasn’t getting delayed again. Then, when I finally got to see the actual movie it was a weird ephemeral thing that didn’t feel real as I watched it and immediately evaporated from my memory shortly thereafter. I tried to special-up the experience of a movie premiere by making trailer blocks to watch before the movie started and that worked somewhat, especially on a big premiere Fridays where a couple of releases came out at once like in June with The King of Staten Island and Da 5 Bloods or on Christmas Day with Wonder Woman 1984 and Soul. 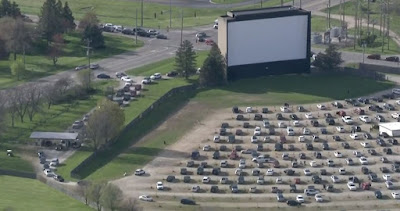 The drive-in became a big salvation for me in 2020. I have a drive-in nearby that played odd, obvious double features all summer but when I did go to see The Flintstones/Jurassic Park or Billy Madison/Tommy Boy, I had a good time. I didn’t grow up on the drive-in experience, so I was still getting used to it and making rookie mistakes last year like sitting too close to the screen, picking days that were too hot to sit in a lot waiting for the movies for several hours, and navigating how to get out of the lot without making a commotion mid-movie etc. Even with that bit of trial and error, I can’t wait to go back to the drive-in this summer. I feel like the drive-in will become a regular staple of my movie diet. It sure beats what I was doing at the start of quarantine, which was driving by my closed movie theaters just to say hi and drive away because I missed them.

Have you changed as a movie fan in the past year? Leave a comment below.
Posted by Patrick Bromley at 5:00 AM