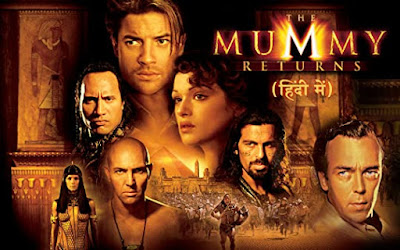 Nominated for “Biggest Disappointment of the Year” at the Golden Schmoes Awards. It lost to Planet of the Apes (2001). You’re right with either choice.

• Best Scene/Moment: At the end of the first act, there’s a fun chase sequence with Brendan Fraser, Rachel Weisz, John Hannah, and Oded Fehr making a getaway on a bus with four undead mummy soldiers chasing them down.

• Best Song: The Mummy Returns has a lively score by Alan Silvestri, but here I’ll highlight a not-great rock single by the band Live called “Forever May Not Be Long Enough.” I used to love Live in high school, so them coming together with The Mummy franchise was very exciting to me in 2001. Doesn’t lead singer Ed Kowalczyk look like if you crossed Gary Sinise with Pauly Shore? 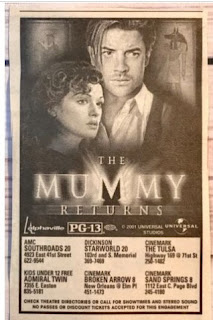 • Best Merch Available on eBay Right Now: An “Original The Mummy Returns Movie Theatre Advertisement 2001 Tulsa OK Universal” for $18.25! I love looking at old movie ads from newspapers. It sucks that they pretty much no longer exist. The seller also has ads for Shrek, Atlantis: The Lost Empire, and Moulin Rouge available for $18.25 apiece, which seems pricey. Of the Tulsa theaters listed here, how could you not choose to go see The Mummy Returns at the Sand Springs 8? This movie has tons of sand!

• Director Check: Stephen Sommers returned for The Mummy Returns following the success of The Mummy (1999). After directing The Adventures of Huck Finn, Rudyard Kipling’s The Jungle Book (that movie rules), Deep Rising, and The Mummy (1999), Sommers was one of the go-to directors for action/adventure films. The Mummy Returns was during Sommers’ peak period that stopped after the very lackluster Van Helsing in 2004. In recent years, Sommers directed 2009’s G.I. Joe: The Rise of Cobra and 2013’s Odd Thomas. I sort of miss Stephen Sommers movies. He stages action well. I hope he gets the chance to make more films.

• Double It with This 2001 Movie: Lara Croft: Tomb Raider

“Revenge of the Mummy” is an amazing theme park ride. Here’s a ride-through video of the attraction from Universal Studios Hollywood. I can’t wait to ride it again when I visit there next summer. My only gripe about the ride is it’s too short.

• Mall Movie? No, this would play at the fancy theater in town since it kicked off the summer movie season in 2001 and was one of the tentpole films for that year. 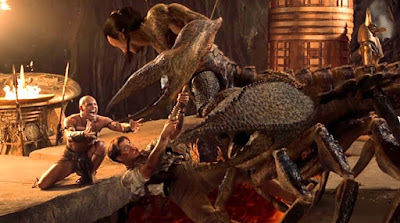 • 2001 Crush: My anticipation for The Mummy Returns.

• What I Thought in 2001: I was a huge fan of The Mummy (1999) and was beside myself excited for The Mummy Returns. I mean it. Click here to read just how obsessed I was. Then I saw the movie, thought it sucked and didn’t return to it until now…

• What I Think in 2021: I still think it’s really disappointing. All the elements are there from the first Mummy, but for some reason (probably the script and pacing) none of it works this time. The movie never finds its footing early and is a slog to get through, with the exception of a couple of fun action sequences. It’s so strange considering how light on its feet and propulsive the original movie was. I’ve never seen The Scorpion King. Should I?
Posted by Patrick Bromley at 5:00 AM