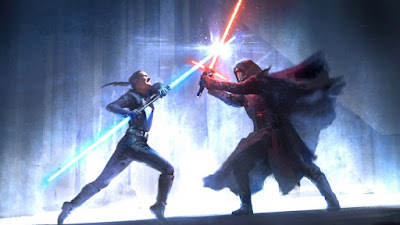 On last week’s podcast, I discussed the discarded screenplay for Star Wars: Episode IX, written by Colin Trevorrow and Derek Connolly. For the uninitiated (or those with better things to do): Disney announced Trevorrow as Episode IX’s director in 2015, but he left the project shortly before the release of The Last Jedi, citing creative differences with producer Disney and Lucasfilm. He was replaced by J.J. Abrams, who — along with Chris Terrio — gave us what would eventually become The Rise of Skywalker, a thrown-together half-measure of a film that I’ll charitably call “disappointing.” We’ll likely never get the full, unvarnished story of Episode IX (or any Disney Star Wars production), but the very fact that Trevorrow and Connolly’s original draft made its way to the internet points to an uncharacteristic level of discord among the creatives involved. A bit of rebellion, maybe? If nothing else, this draft (dated 12/16) is an artifact. A curio. A “What-If?” worth exploring. Let’s dig in. 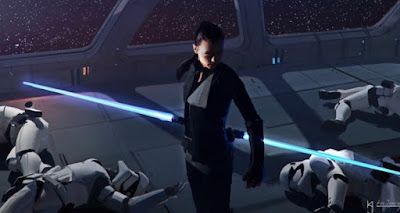 Picking up an indeterminate time after The Last Jedi, Duel of the Fates begins with our Resistance heroes — including a double-lightsaber-weilding Rey — on a covert mission to free a First Order labor camp. Though still reeling from their losses at the end of the last film, the Resistance lights the spark of rebellion brighter with each day. The young rebels, too, are asserting themselves through the struggle, with Rose in particular developing into a capable leader in contrast with Finn and Poe’s often reckless bravado. One fun early scene finds the group stealing a Star Destroyer and fleeing from the Knights of Ren, each of whom becomes more distinct and sinister as the film progresses. Meanwhile, Chancellor Hux has grown brutal and uncompromising since the First Order’s defeat on Crait, holding daily executions of suspected traitors for all to see. Finally, Supreme Leader Kylo Ren travels to Mustafar in search of a long-lost Sith master. Scarred by those efforts and tortured by the ghost of Luke Skywalker, he dons a new facemask and learns to wield the power of the Living Force.

Emboldened by these smaller victories and aided by the information in Rey’s recovered Jedi Texts, the Resistance pursues an Old Republic communication system under the Jedi Temple on Coruscant, a network capable of relaying a message of hope to the entire galaxy. Though she’s happy to play her part in the revolution, Rey remains conflicted in her role as the last Jedi. Luke Skywalker haunts her, as well, and they bicker over the paradox of “balance” (“Dark suffocates the light. Light extinguishes the dark. Over and over. How is that balance?”), her continued telepathic connection with Kylo Ren, and her burgeoning — but impossible — romance with Poe Dameron. Though General Leia provides steady guidance, Rey can’t help but feel that her masters aren’t seeing the big picture. Finn, too, wages a private revolution against the status quo: A chance encounter with a Stormtrooper inspires him to free the minds of others enslaved by the First Order, bringing his own journey into rebellion full-circle.

There is little to be gained by comparing each of Duel of the Fates’ individual story beats with those of The Rise of Skywalker, but even as a first draft, Trevorrow and Connolly’s story is the more thematically coherent of the pair, and its depictions of our lead characters are more consistent with the growth they’ve shown in previous entries. Though he’s now a Resistance leader, Poe Dameron remains a scoundrel at heart, trading the austere regality of the Rebel Alliance for shadowy negotiations with those who populate the galaxy’s various hives of scum and villainy. Kylo Ren has abandoned all pretense of inner conflict, doubling-down on the Dark Side in response to Rey’s refusal of his offer in The Last Jedi. He makes the careless decisions of a young man possessed by rage, rushing into conflict when he should be gaining insight. And although it recalls romances from trilogies past, Rey and Poe’s efforts to navigate their shared affection are couched nicely within their responsibilities as the Resistance’s best and brightest. 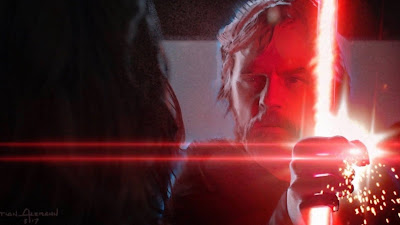 As our heroes trek across the galaxy, Dual of the Fates offers a strong balance of old and new settings and situations, including the seedy nightmarkets of Bondan, an “orbital defense ring” space station (which I envisioned as the Halo from Halo), the Knights of Ren’s arrowhead-shaped ship (the Knife 9, which is also the name of my next punk band), and a return to the planet Coruscant, which has decayed in its time as the First Order capitol. A significant portion of the film takes place here, echoing The Force Awakens’ almost anthropological examination of a previous trilogy while avoiding The Rise of Skywalker’s empty, repetitive fanservice. There is sound thematic reasoning behind our return to Coruscant — it’s the point of origin for both the Republic and the Jedi. It stands to reason that the nine-part series should end where it once began. Lando Calrissian returns, as well, now the owner of a cabaret club catering to the First Order. Had Carrie Fisher survived, Leia and Lando’s reunion may have been one of the film’s more memorable scenes.

But Duel of the Fates is hardly a victory lap. Rey’s inner conflict is as powerful as Vader’s once was, and the film doesn’t shy away from it. Her anger and ego often drive her actions and present true moral grey areas: One scene finds her using Jedi mind tricks to make her friends do her bidding; another features her ending a confrontation with an enemy via an unnecessarily brutal lightsaber strike. And it isn’t just Rey’s journey that darkens. Rose Tico is tortured in this film! The budding badass responds in kind, though, telling Hux that she “has one of these at home” as she hangs vertically from an elaborate torture device. Ren is nearly killed by Force lightning. Rey is slashed through the eyes by a lightsaber. Most horrifying of all: We see drunken Stormtroopers sing pub songs! Though the dialogue is in clear need of a polish and many action scenes lack the depth and intricacy of others in the series, Duel of the Fates presents a strong template that gives its creatives (especially Oscar Isaac) room to further define their spaces. 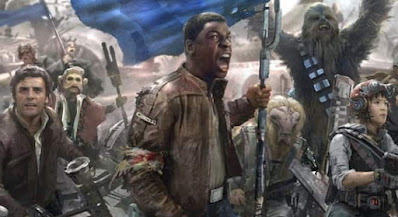 There are issues, of course. This is a first working draft. A late bit involving Rey is lifted whole cloth from Harry Potter and the Deathly Hallows and would need retooling. Carrie Fisher’s untimely death would have necessitated an entire round of rewrites on its own, but removing her from this story entirely would not be a challenge, as Poe was essentially made leader of the Resistance in The Last Jedi. And while several bits were carried over into The Rise of Skywalker (Lando’s navy of civilian ships, in particular.) each one makes more sense here than they do in the final film. Perhaps that’s because, rather than trying to fit into a nine-part intellectual property called Star Wars, Duel of the Fates actually attempts to conclude the story those films told. A story about inspiration and revolution. About growing up and reaching out. About hope. It’s not perfect, but it does feature Chewbacca flying an X-Wing. Doesn’t that sound like fun?

Note: The concept art accompanying was leaked without attribution to the artists responsible for it. Rather than speculate, I’m leaving the images unattributed and inviting those in the comments to assist, if so inclined.
Posted by Patrick Bromley at 5:00 AM