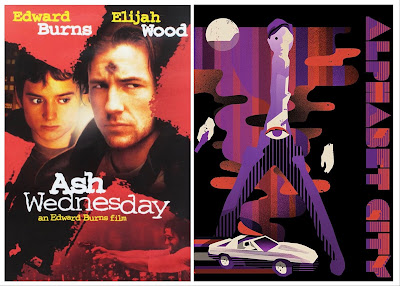 “I don’t know how they do things in Ireland but this is Hell’s Kitchen and we got f*ckin' rules here.” – Francis Sullivan

Writer/Director/Producer/Actor Edward Burns, while not the greatest at all of his hyphens, is one of my all-time favorite multi-hyphenates. From The Brothers McMullen to Bridge and Tunnel, I find inspiration in everything Burns does. Like another one of my favorites, Larry Fessenden, Burns gets his art made in whatever ways he can. He self-finances, finds partners, picks up acting gigs in order to make the stuff he really wants to make. I love seeing artists work their butts off to make what they really want to make. And while most of Burns's films have flown under the radar, I love them all. So much so that I might consider Ed Burns to be a Mount Rushmore writer/director. And I especially love his Irish crime drama Ash Wednesday.

Ash Wednesday takes place in 1983 Hell's Kitchen and follows Francis (Burns), a recently-retired low-level henchman for the local Irish mob boss, Whitey. Three years prior, Francis's brother Sean (Elijah Wood), disappeared after killing a rival gang member. It was said Sean was killed but rumor has it he's still alive and back in the neighborhood. Now Francis has to juggle defending his bar from rival hoods, reassuring Whitey everything is under control, and maintaining his new, respectable life (“I found religion.”). 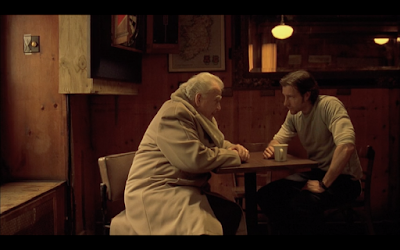 Like most of Burns' films, it's shot on location in New York for less than a million dollars and features many of the actors from his Marlboro Road Gang “troupe.” Burns and Wood are surrounded by an outstanding cast of actors including Rosario Dawson, Malachy McCourt, Oliver Platt, Michael Leydon Campbell, and Dara Coleman. Burns is able to transport us to an early-'80s Irish Catholic portion of Hell's Kitchen, and throughout the entire film we're on pins and needles, waiting for something awful to happen we're almost sure is going to happen. What unfolds from beginning to end seems inevitable yet heartbreaking nonetheless.

We pair one understated New York crime movie with another. Amos Poe's Alphabet City follows Johnny (Vincent Spano), a local hood and drug dealer for the crime lord who runs the Alphabet City neighborhood of Manhattan. Johnny has a girl and a baby whom he loves and for whom he would do anything... including trying to get out of a life of crime. In one night we see Johnny collect money, visit “the store” (a heroin den), warn his mother and sister their building will be burned down, and take on the local mob all by himself.

Fun City Editions put out an incredible Blu-ray package of this film, which includes an introduction by Spano. He says he thinks the film still holds up and that it “gives you insight into a dark world that really existed in a New York City that doesn't exist any more.” While cleaning up dilapidated buildings and pushing the drugs out is good, the gentrification of a unique neighborhood is horribly depressing. Alphabet City is one of the most stylish films I've ever seen, and the way Poe is able to romanticize and honestly convey this world is breathtaking. Entire eight-story buildings are lit up in purples and greens. The wet streets reflect the neons shining down from surrounding nightclubs and bodegas. Shadowplay tells half the story, with characters reflected in silhouette behind canvas or thrown up on brick walls. The film opens with a Commando-esque sequence of Johnny getting dressed for the night. His mesh shirt, leather pants, suede boots, chains, studded bracelets, and belt tell you everything you need to know about him. He drives a T-top sports car with license plates that read CHUNGA. Johnny is a pretty (but tough) boy. 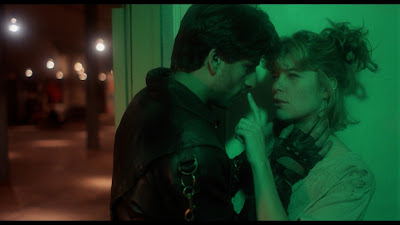 On top of both being small but spectacular New York City crime films, they both have gorgeous soundtracks. David Shire (from The Taking of Pelham One Two Three to Zodiac) composed the minimalist score for AW that includes a motif that is played throughout the film that will live in your head. On the opposite side of the spectrum, Nile Rodgers (founder of Chic and songwriter for Sister Sledge, Diana Ross, and many more) composed the music for AC. It's a post-disco, funky new wave sound full of songs you would here on the radio at the time. In AW Francis is described as “John Wayne on acid.” He's quiet but you wouldn't mess with him. In AC, Johnny is tough but the opposite of quiet. He's not afraid of confrontation and he'll let anyone know it. Talking to his junkie-partner played by Michael Winslow, he says, “You and me got this street by the balls – practically legends!”

My goal in this pairing is a selfish one: I'm putting into the universe that my friend Jonathan at Fun City Editions would put out a nice Blu-ray edition of Ash Wednesday (or at least look into it). This is a special and unique time period in New York City that only lives in memory and on film. In each film we're in frightening time periods in the city full of frightening characters. And let me admit one more thing: I kind of want to live there.
Posted by Patrick Bromley at 5:00 AM